Hundreds more children have been sent home after a suspected false widow spider infestation led to the closure of an eleventh London school.

Fairlop Primary School, in Hainault, east London, is the latest to be affected.

The school, which has around 750 pupils, was closed yesterday and remained closed today.

Based in Redbridge, it marks the second case of a venomous spider outbreak outside the borough of Newham; another infestation hit Highfield Primary School in Enfield, north London.

More than 4,000 pupils had been told to stay at home after nine schools in the east London borough closed following outbreaks of the UK’s most venomous spider. 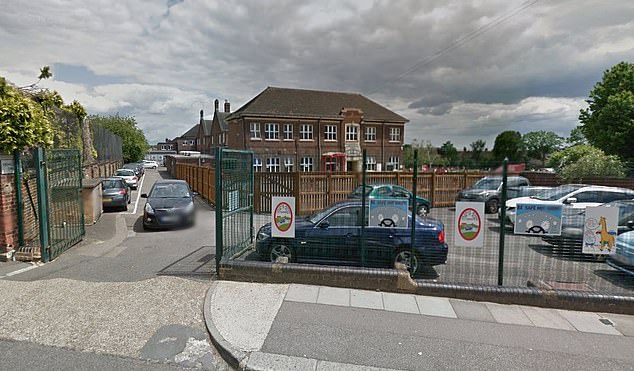 Fairlop Primary School (above), in Hainault, east London, is the 11th school to be closed following a suspected infestation of false widow spiders. The school, in Redbridge, was closed yesterday and remains closed today 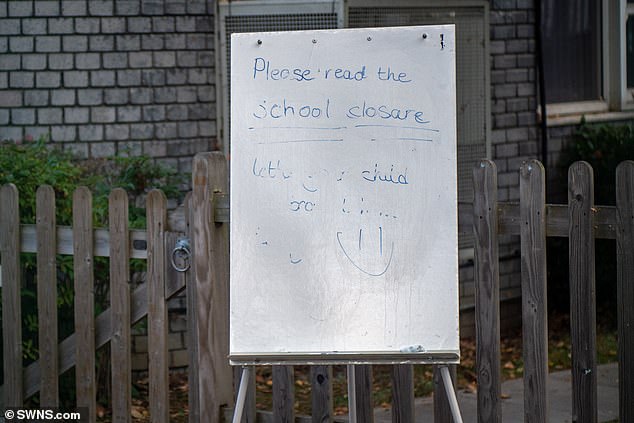 Godwin Junior School was closed last Thursday and Friday. A sign (above) urged parents to read the school closure information following a spider infestation. The school re-opened on Monday after the premises were fumigated 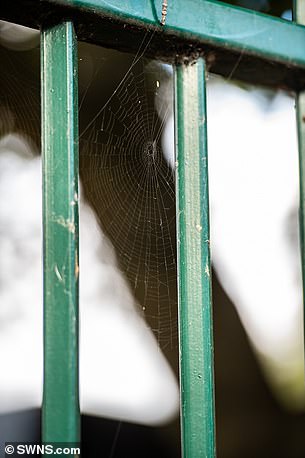 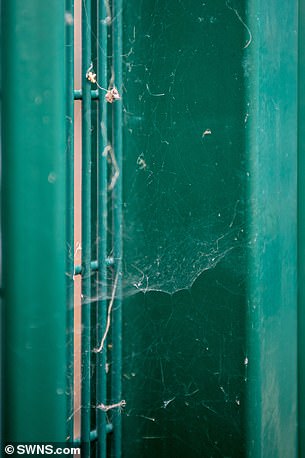 Cobwebs could be seen on the gates of Godwin Junior School prior to the fumigation. False widows do have a venomous bite but the venom is not particularly potent for humans 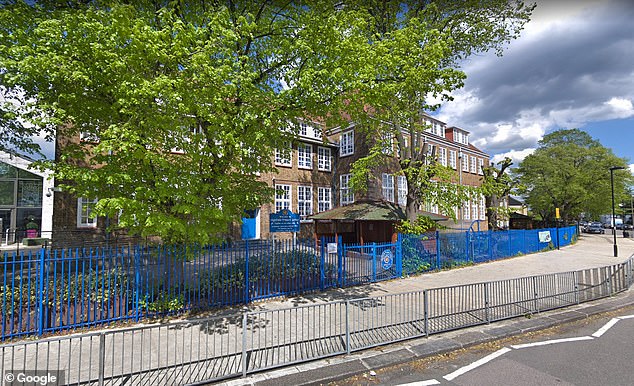 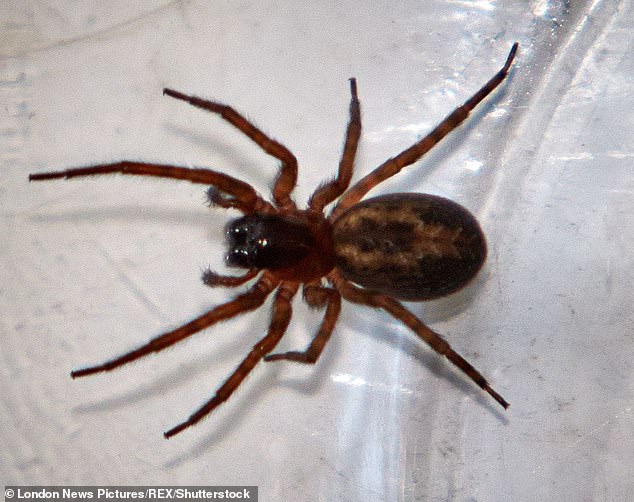 The false widow (above) was introduced to Britain in late 19th century and is native to the Canary Islands and Madeira. It appears similar to the deadly Black Widow but its bites are similar to wasp or bee stings 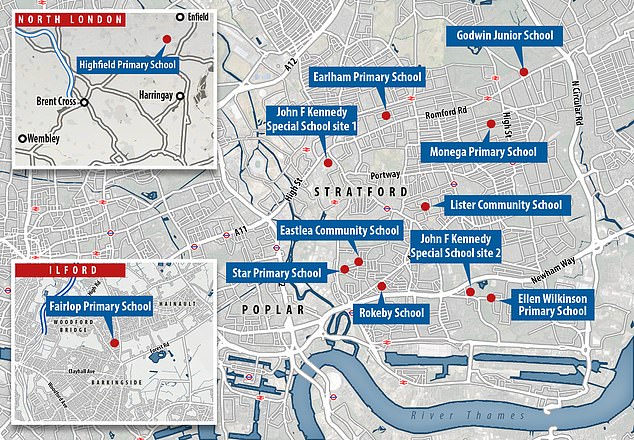 What are false widow spiders?

Council leader Jas Athwal said the exact species and type of infestation at Fairlop Primary was yet to be established, but it could be false widows.

A council spokeswoman said: ‘After reports that a small number of people had been bitten by a spider, Fairlop Primary School was closed to allow for pest control assessments to be made and for the problem to be treated.

‘The school worked in conjunction with parents to ensure that all pupils were safely released to their parents’ care and provided further advice to parents and staff about how a spider bite of this kind might be treated.

‘The school will be closed for the rest of today and will remain closed tomorrow to allow the relevant services access to the parts of the schools affected.

‘Treatment of the affected areas of the school will continue during the half term holiday next week and the school will make arrangements to provide advice and guidance to parents about the school re-opening after the forthcoming October holiday’.

The false widow was introduced to Britain in late 19th century and is native to the Canary Islands and Madeira.

It appears similar to the deadly Black Widow but its bites are similar to wasp or bee stings. 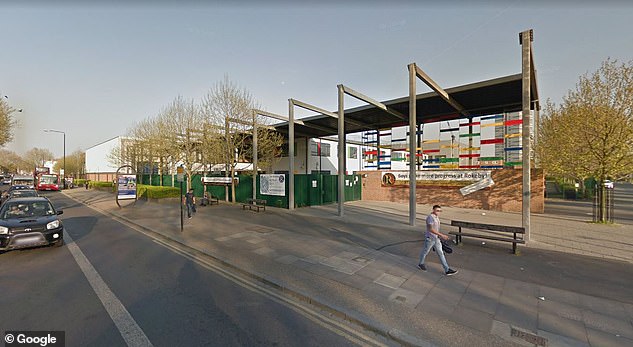 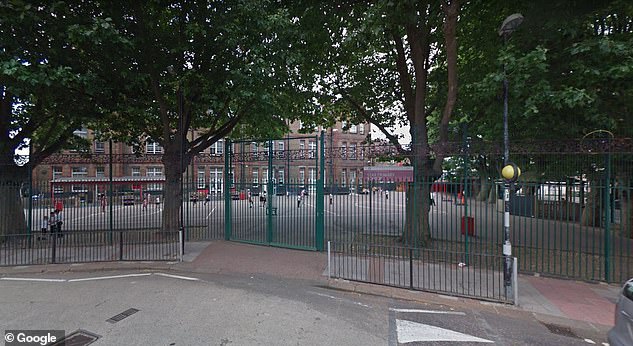 Star Primary School was also affected by an outbreak. There are three types of the spider – the noble false widow, or steatoda nobilis, the steatoda bipunctata and the steatodo grossa – in the UK. They all have shiny abdomens with a white half-moon shape at the front, and grow up to 14 mm long 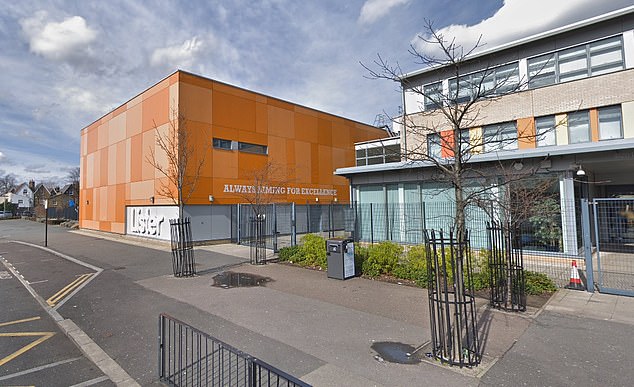 Ellen Wilkinson Primary School was also among the schools that closed on October 4. It has since re-opened

There are three types – the noble false widow, or steatoda nobilis, the steatoda bipunctata and the steatodo grossa – in the UK.

They all have shiny abdomens with a white half-moon shape at the front, and grow up to 14 mm long.

The noble false widow has the most toxic bite of any British spider but there have been no reported deaths resulting from them, yet.

Star Primary and Ellen Wilkinson primary. Have both now re-opened.

Rokeby Secondary School closes. It will reopen on October 29.

Earlham Primary school was closed but has now been declared spider free.

Eastlea Community School closes. It will remain closed until October 29.

John F Kennedy Special School closes both its campuses in Stratford and Beckton. It is not known when they will re-open.

The closure of schools is an ‘over-reaction’, says spider expert, and numbers aren’t up this time of year

The closure of schools is a ridiculous over-reaction. Although the Noble False Widow Spider is one of the few British species that can nip, there is no serious evidence of an outcome other than a temporary red bump and some discomfort.

The wounds claimed to result from so called spider bites (the evidence for spider bites are largely inferential rather than proven) are not consistent with the effects of the venom of this species.

This spider hides away in a retreat during the day, often a hole on the outside of buildings and in crevices in railings etc., and is highly unlikely to come into contact with humans.

One has to work pretty hard to make a spider feel threatened enough to nip (e.g. by squashing or poking one) and even then the chance of one injecting venom is low.

All that is needed is for children to be told about the spider in their school grounds and just to leave it alone if they see one. Education at its best.

The spiders now occur all across southern and eastern England and along the South wales coast, and are spreading northwards.

In the south-east they will be in almost all build-up area. I really don’t see the point of fumigating schools or anywhere else.

Not only does it expose the staff and children to unnecessary exposure to the fumigant but it will have to be repeated endlessly.

Because the spider is established in the wider environment it will move back into vacant niches from which it has been removed.

There is no reason why this stupid scare should have occurred now except that people think there are more spiders about this time of year (false) and therefore might be more aware of them.

Once one school jumps others follow, as happened a few years ago.