For some, there is no finer sight than a locomotive in full steam chugging majestically through the glorious English countryside.

But in one idyllic corner of East Sussex, that prospect has got the locals, well, rather steamed up.

They are trying to prevent a heritage railway line being extended by two miles from Bodiam to Robertsbridge amid accusations of bullying and environmental vandalism. 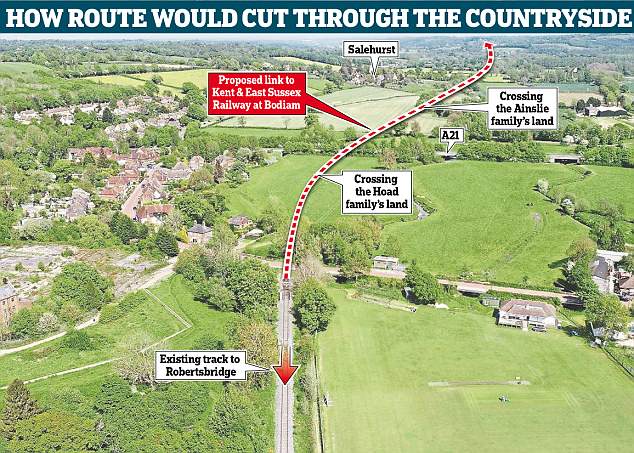 The use of compulsory purchase orders on farmland needed for the new track has even been branded The Great Robertsbridge Train Robbery by campaigners.

The controversial £7million scheme, led by rail enthusiasts backed by wealthy – and anonymous – benefactors, would restore what supporters call the ‘missing link’ in the Kent and East Sussex Railway, connecting it with the national network on the London to Hastings line.

The original route, between Robertsbridge and Headcorn in Kent, opened in 1900 and was shut in 1961. It partially reopened as a heritage railway – where the public can enjoy journeys at 25mph on old steam locos and diesel trains – 13 years later, running for ten and a half miles from Bodiam to Tenterden. A previous attempt by rail preservationists to take over the missing Bodiam to Robertsbridge section was quashed in 1973. 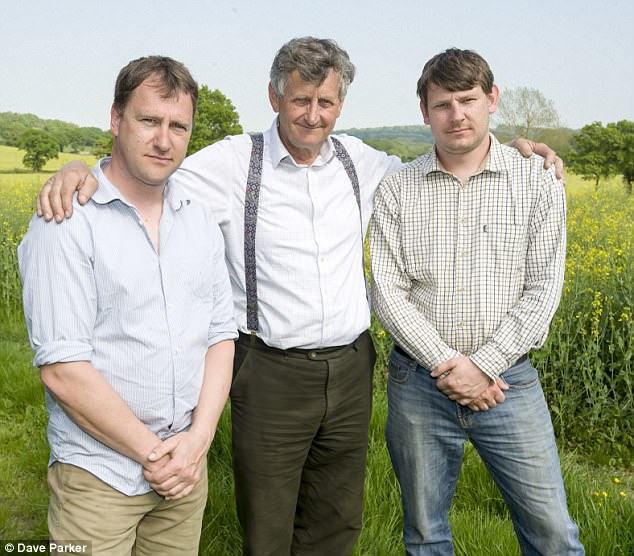 Andrew Hoad, 67, with his two sons Tom 38 (left) and Will 34 (right) who own Parsonage Farm in Robertsbridge, East Sussex where multi millionaire Richard Broyd is trying to extend a heritage steam railway across their land as a ‘Vanity Project’

Those behind the current bid by the Rother Valley Railway, or RVR, argue it will attract an extra 50,000 visitors annually and add £4.1million a year to the local economy. Supporters include Network Rail and the National Trust, which will gain a rail link to the 14th century moated Bodiam Castle.

They say it could put Robertsbridge, which dates to 1176 when a Cistercian abbey was founded, back on the map. But opponents fear it will leave an ‘ugly scar’ on the landscape, harm wildlife habitats and destroy the area’s tranquillity. Three level crossings would be needed, including one on the busy A21 London to Hastings road. 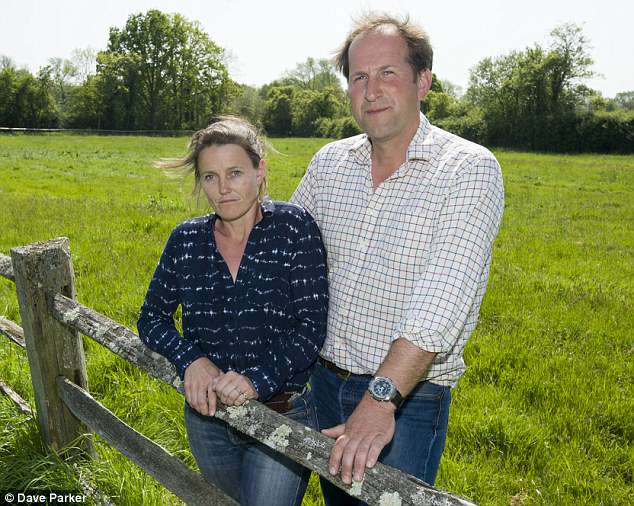 Emma Ainslie, 45, and her husband Alexander, 45, who own Moat Farm in Robertsbridge in East Sussex 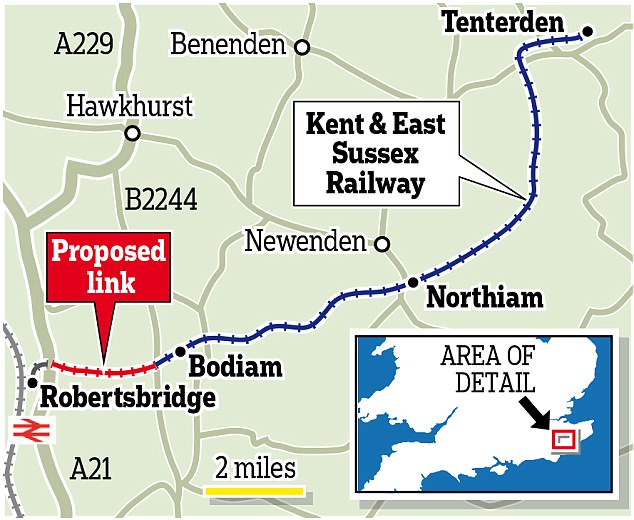 Rother District Council granted planning permission last year but, crucially, the two families whose farms would be crossed by the line do not want to sell their land to RVR

Rother District Council granted planning permission last year. Crucially, however, the two families whose farms would be crossed by the line do not want to sell their land to RVR. They claim the project is to allow ‘rich men to play with their toys’ and the threat of compulsory purchase orders, or CPOs, amounts to ‘a land grab reminiscent of the Dark Ages’.

There is no surviving railway track on either farm. One embankment is still visible but is covered by mature oak and other trees.

Alexander and Emma Ainslie, both 45, run 220-acre Moat Farm. Mrs Ainslie’s grandfather Robert de Quincey bought it in 1946 after returning from three years as a prisoner of war in Burma.

Mrs Ainslie said: ‘It is purely the whim of an organisation of train enthusiasts who feel they have the right to take something for their own gratification. 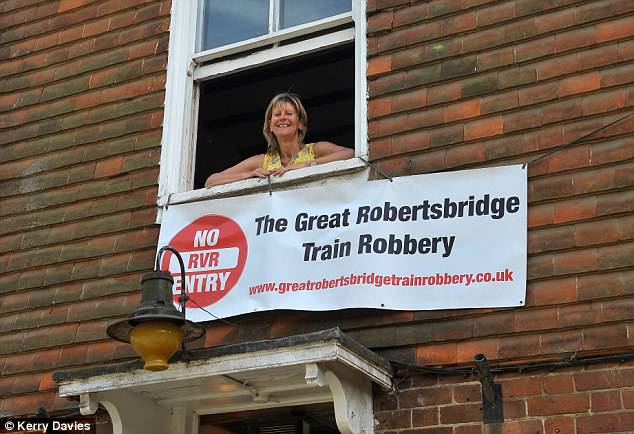 Karen Collier-Keywood, the landlord of the Salehurst Halt Pub in Salehurst. She has put up a poster protesting about proposed railway track extensions through her area 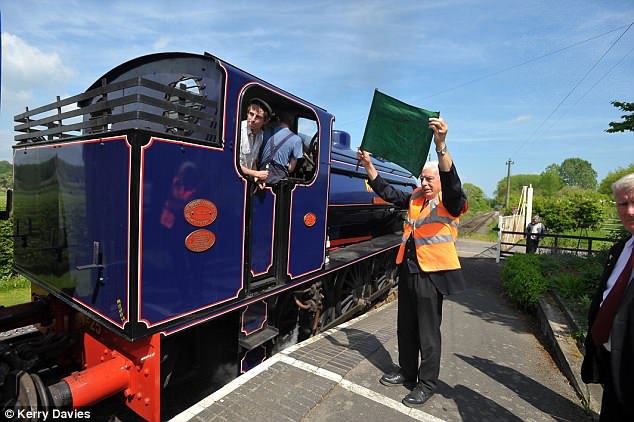 ‘They are just big bullies who want their train set and don’t seem to care what they have to do to get it. The habitats that survive there are incredible. We are continuing to try to protect this for future generations.’

Neighbouring 440-acre Parsonage Farm has been in Andrew Hoad’s family since the 1880s. Mr Hoad, 67, who runs it with wife Lynn and sons Tom, 38, and Will, 34, said: ‘We feel angry at having our land taken from us against our will for what can only be termed a vanity project. It would wreck part of our farm, chopping fields into narrow pieces that we can’t farm properly.’

At the local pub, the Salehurst Halt, landlady Karen Collier-Keywood, 59, said: ‘Our village has always been about community. Using a CPO to take someone’s land for a heritage railway is immoral.’ 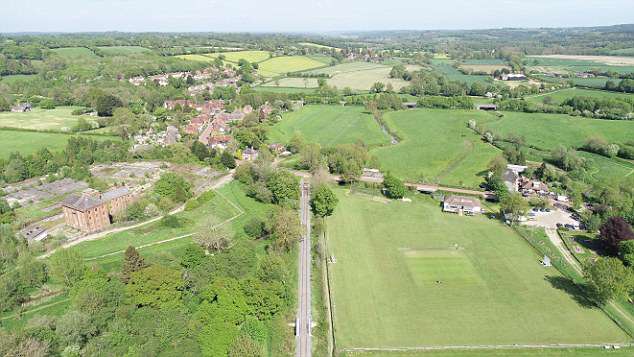 End of the line: Those behind the current bid by the Rother Valley Railway, or RVR, argue it will attract an extra 50,000 visitors annually and add £4.1million a year to the local economy

The Government must now agree to make an order under the Transport and Works Act for the purchase to go ahead, but that could require a public inquiry.

RVR, which would pay 10 per cent above the market value of the land, is already building a heritage railway station opposite Robertsbridge mainline station and track has been laid for about half a mile towards the two farms.

One of RVR’s directors is Richard Broyd, who founded Historic House Hotels. It also has links to multi-millionaire hedge fund manager Jeremy Hosking, 59, who owns a number of steam locomotives including the Royal Scot.

RVR chairman Gardner Crawley, 74, said: ‘There’s a lot of very wealthy people in East Sussex but parts of it are very deprived – and the big employer nowadays is tourism. Making tourism here more accessible to people who don’t have cars is very important. It’s not as though we’re putting a new line across virgin land – there was a railway there until the 1960s.’