The family of a 70-year-old grandfather missing in Victoria’s alpine region since last Friday say they remain hopeful he will be found despite rescue crews scaling back their huge search as weather worsened at Mount Hotham.

A team of more than 100 is still searching for the man, known only as Christos, who was last seen when he went for a walk on Friday afternoon on Big Muster Drive at Dinner Plain. 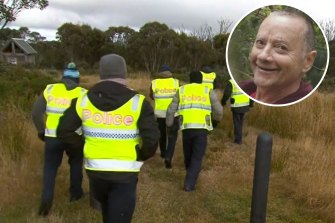 Christos was last seen at Dinner Plain on Friday.Credit:Nine News

Police hope Christos, from Greensborough in Melbourne’s north-east, is still alive despite being exposed to freezing temperatures and high winds.

His family said their “spirits remain high” that he would be found.

“Regardless of the condition he is in, we are desperate to find him for our family’s peace and closure. We just don’t have it in our hearts to walk away without him,” they said in a statement on Wednesday afternoon.

“We are so grateful for the local community support we have received and we can’t thank the search team, police, volunteers and wider community enough for all they have done so far.

“The overwhelming amount of messages we have received from our friends and family have been getting us through this difficult time.

“We thank you with all our love. Our prayers are constantly with him.”

The temperature at Mount Hotham fell below zero on Tuesday, with wind gusts over 60km/h. At 5pm on Wednesday, it had dropped to minus 4 degrees. A thin layer of snow had fallen at the peak of the mountain.

Inspector Paul Hargreaves said on Tuesday that rescuers had told him it would have been hard for someone to go missing if they had stayed on the walking tracks. 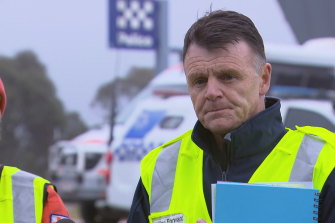 Inspector Paul Hargreaves updates the media about the search.Credit:Nine News

“They said the tracks are very well signed, they’re very obvious and everything points you back to the village,” he said.

The suggestion was that Christos might have had an accident while walking, Hargreaves said.

“That’s why we’re searching those extreme areas,” he said.

“If you fall over, you lose your track and you actually disappear off the track a little bit – go a short distance and you’re in scrub and then you’re lost. And that’s what we think probably happened and that’s why we’re searching those outside areas.”

Emergency services have conducted a massive search since Saturday with help from volunteers on horseback and on foot.

Christos is a grandfather and Yarra Trams employee. He was last seen when he went for a walk to search for emus on Friday afternoon.

He and his wife had been holidaying in the alpine region for three days before he went missing. He was wearing a long-sleeved top, long-sleeved jumper, pants and Crocs when he vanished.