Family’s rental car gets SMASHED during a bison stampede

A family vacationing in Yellowstone National Park instantly regretted not buying rental car insurance when the front of their car gets totaled in a bison stampede.

Bruce Delle Chiaie and his family were vacationing in the sprawling national park when they became swept up in a sudden bison stampede.

According to Cater Clips, the family was driving through Lamar Valley in Wyoming on August 13.

Bruce told Cater Clips: ‘We had gone to Lamar Valley to try and view a moose we had seen the night before.’

But what the family found instead was bison mayhem. 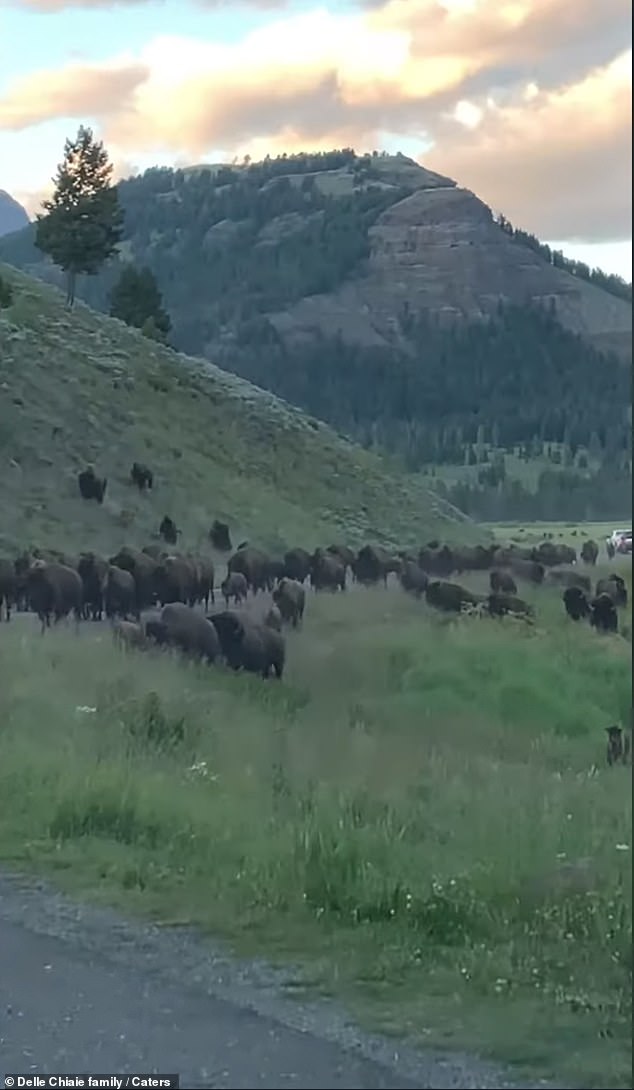 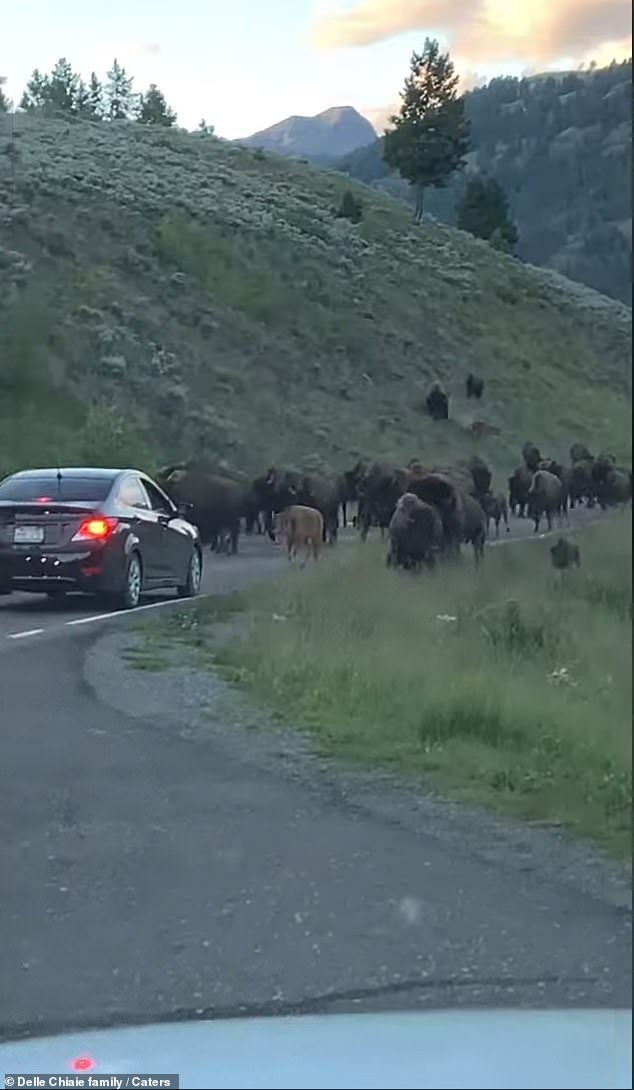 While driving through Lamar Valley in Wyoming, the family was forced to stop when a herd of stampeding bison were charging towards oncoming traffic 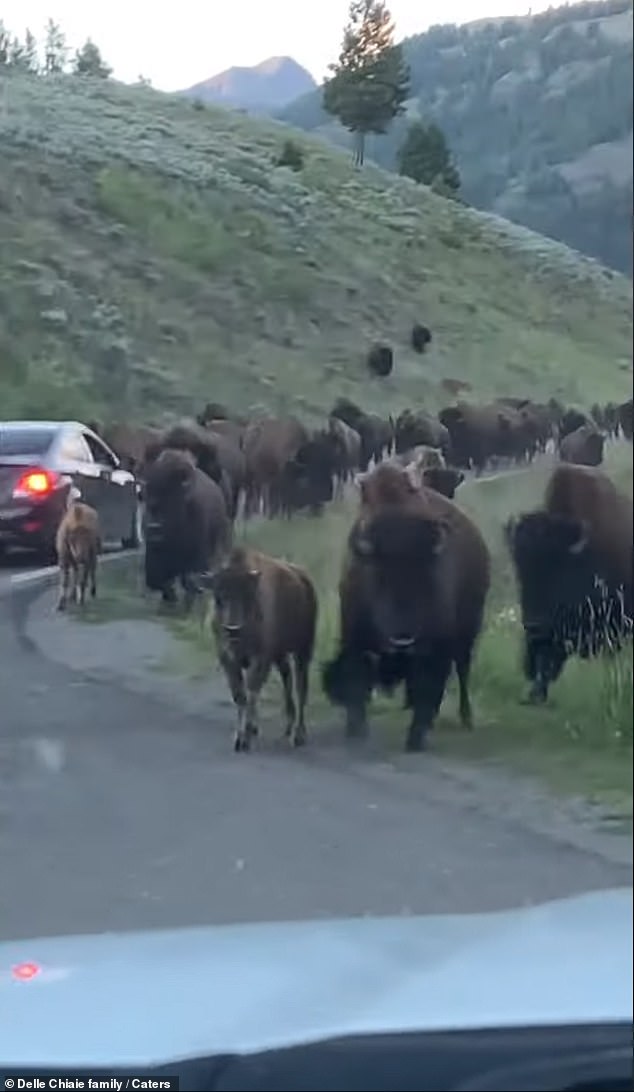 As the family watched in awe, the bison herd gradually got closer to their rental car and one nearly swipes the drivers side in a close call

A herd of bison were stampeding against traffic and swerving in between the cars of shocked visitors.

In a video shared with Digg, Bruce began recording the terrifying scene while he and his family watched the charging bison in awe.

As the herd bolted down the roadway, they steadily get closer to the Della Chiaie’s family vehicle.

At one point Bruce spots an approaching bison and frantically begs the bison not to hit the car. 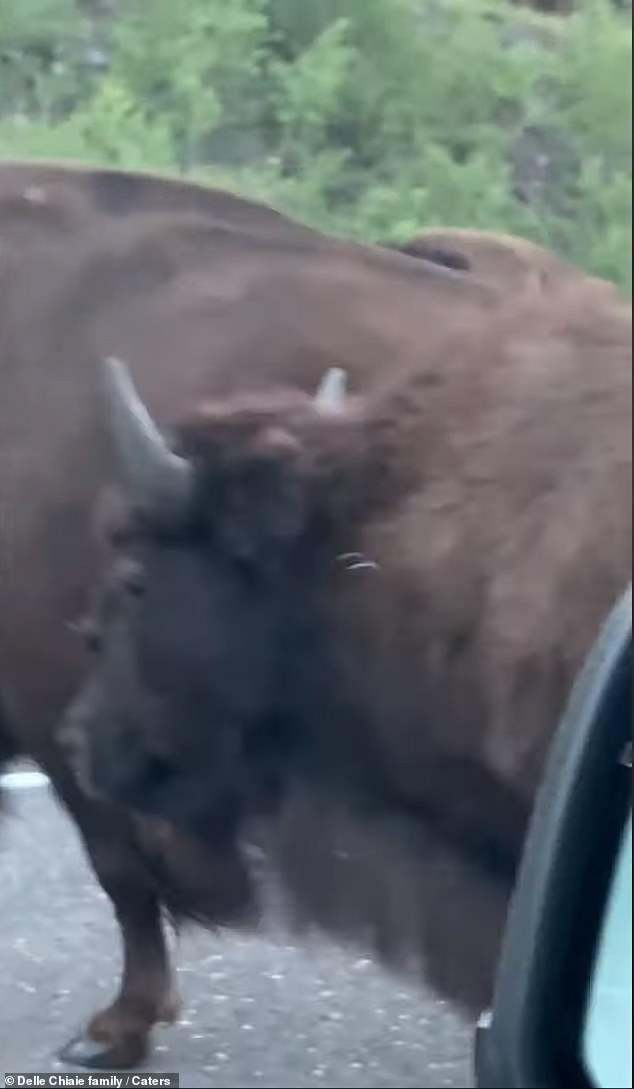 Seconds later, a massive bison rams its horns into the family’s rental car, shattering part of the windshield and sending pieces of the car onto the road

He heaves a sigh of relief when the bovine narrowly misses the driver’s side of the car, but the relief is short lived.

‘Oh look at the big one in front of us!’ Bruce’s wife exclaims.

Seconds later a massive bison slams its horns into the front of their rental car with a deafening crack and devastates the vehicle.

The family’s screams at the impact.

They sit in shock after the incident with one of Bruce’s sons chiming in from the back seat. 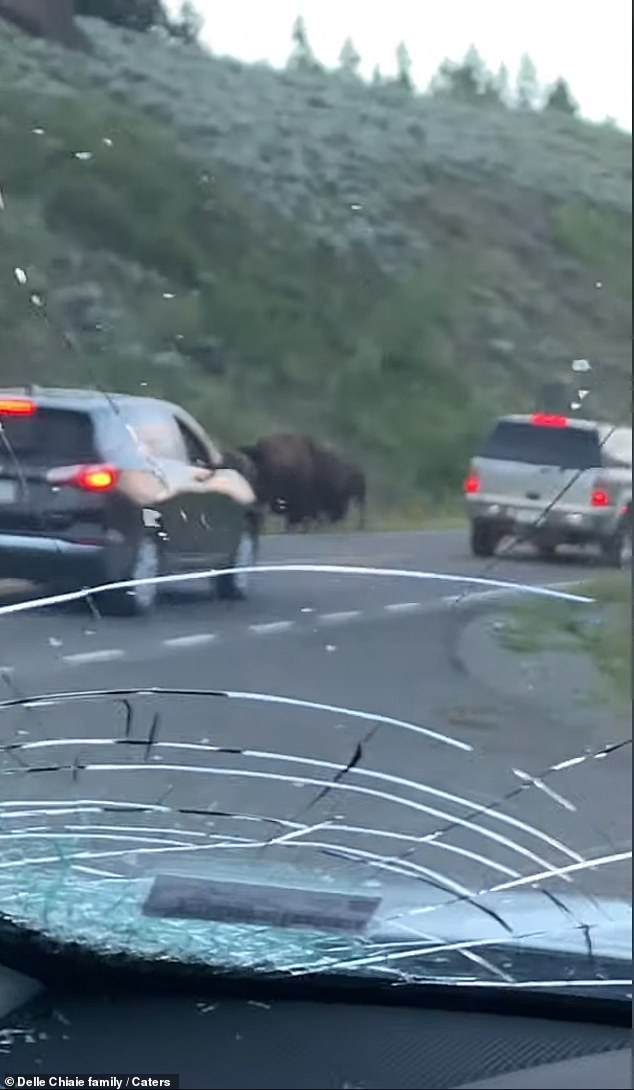 Bruce: ‘Oh man, there goes the money. Thanks for not taking the insurance. I can’t believe we didn’t take the insurance’

‘You just got smoked!’ he said.

Luckily no one was injured, but their pockets may hurt for a bit.

The video shows a portion of the front windshield shattered and Bruce pointing out the other broken spots.

‘Oh my god, the whole hood is crushed. The car’s plastic is over there,’ Bruce says, referring to the roadway.

Despite appearing docile, Science X reports that bison are dangerous and can run up to 35 miles per hour.

Bison are North America’s largest land animal, and according to the National Wildlife Department can weigh up to 2,000 pounds.

National Park Service estimates there are a little over 4,500 bison in Yellowstone National Park and advises visitors to stay at least 25 yards away from bison while on the park sites.

Bison in Yellowstone have attacked eight people since 2015, with a recent case involving a nine year old Florida girl who was tossed in the air by a bison near Old Faithful Geyser. Nick Jonas Joins ‘The Voice’ Tonight – Meet All The Coaches & Celebrity Mentors
We and our partners use cookies on this site to improve our service, perform analytics, personalize advertising, measure advertising performance, and remember website preferences.Ok