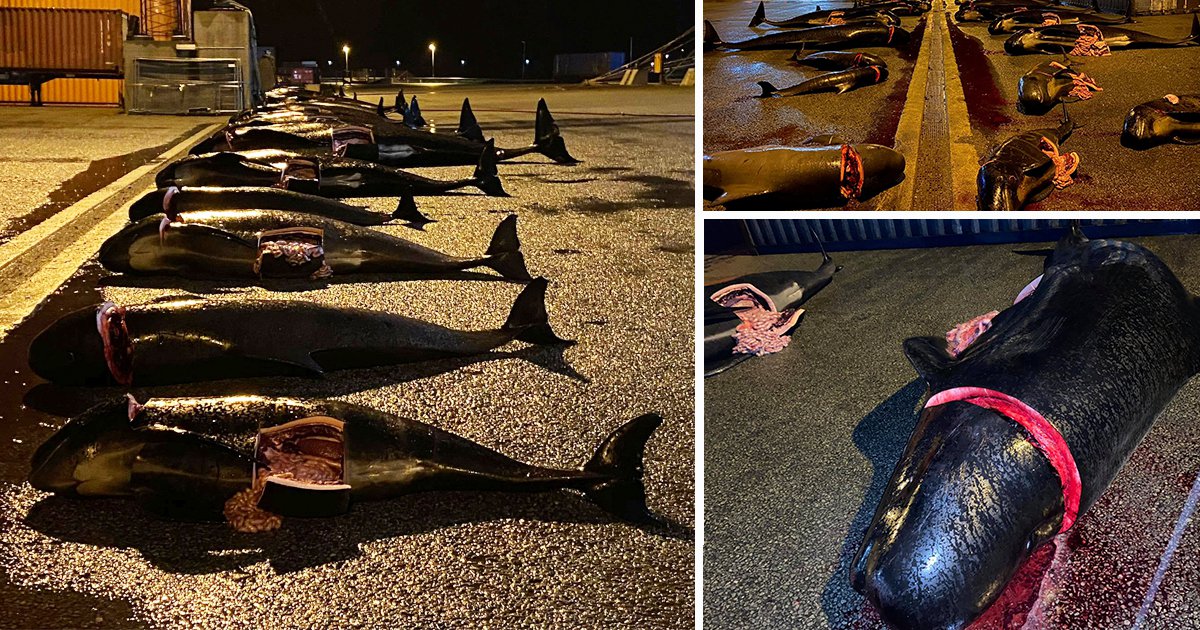 Hunters in the Faroe Islands have killed dozens more dolphins, days after slaughtering 1,400 in a mass bloodbath.

The killings on Wednesday night provoked further outrage at the annual ritual, after what was believed to be the largest mass slaughter of the animals in recent history.

This village is just 10km away from where 1,428 Atlantic White Sided Dolphins were slaughtered on September 12.

The Government of the Danish territory defended the slaughter, which is part of a centuries’ old Grindadrap hunt, as exclusively revealed by Metro.co.uk.

But even ardent hunters were shocked at the number of deaths this year – with so many killed that people ‘had to destroy the blubber’.

Now, though, a review into the killings has been ordered.

The annual massacre sees dolphins and whales herded into a bay by local boats before having their spinal cords severed.

The sea creatures’ bloodied bodies are then lined up to be distributed around the area.

Marine conservation charity Sea Shepherd UK has been campaigning against the tradition for many years.

Chief Operating Officer Rob Read said: ‘Many people aren’t even aware of this practice – it is such a cruel thing to do.

‘In these killings, no animal is spared – adults, calves, and even pregnant mothers.’

The people of the Faroes – an archipelago 230 miles north-west of mainland Scotland – used to be reliant on whale and dolphin meet to survive.

Rob added: ‘There is no need for the meat in Faroe Islands nowadays and it shouldn’t be happening.

‘Now, it is little more than sport, using tradition as justification, and that’s why we campaign against it.

‘This is why we will never give up opposing it and we’re determined to raise awareness to make change.’

Pods of dolphins and whales are forced up onto a beach before being killed – a method of slaughter that can see entire genetic groups wiped out.