Father deported after arriving in Dublin for visit to his children

‘Heartbroken’ American father-of-three is arrested, locked up overnight and deported after arriving in Dublin for surprise visit to his children because border officials didn’t believe he would go home afterwards

A father of three was arrested and deported from Dublin Airport while trying to visit his three children in the United Kingdom – as border officials didn’t believe he’d go home afterwards.

Ryan Volrath, 33, an American citizen who currently lives in Wisconsin, met and married his Northern Irish wife 10 years ago and she gave birth to two of their children in America.

However his wife Kylie, 32, had to return to her home town of Omagh last September because she couldn’t get a green card – known officially as a Permanent Residence Card – to stay in the US. She gave birth to their third child back in Northern Ireland.

Mr Volrath however, who travelled back with her, could only stay in the UK for four months as he was unable to obtain a spouse visa. He has remained in the US since as he does not currently meet the financial threshold needed to apply for residency in the UK.

UK rules mean Mrs Volrath would have to make over £18,600 a year for her husband to be eligible to join her permanently – which she says is ‘impossible’ with three young children. 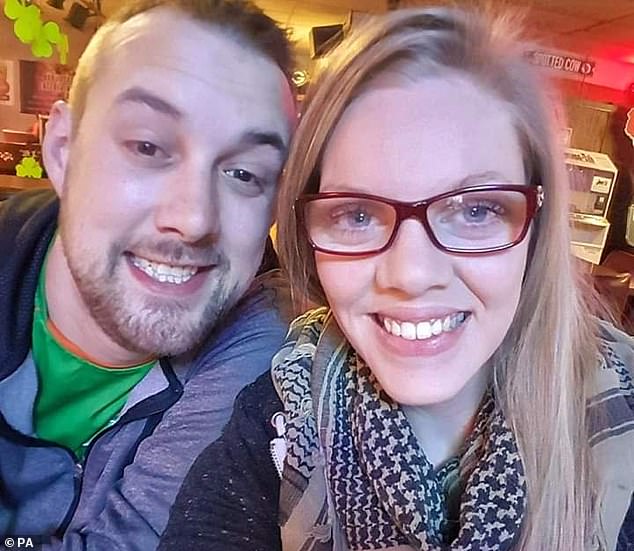 Ryan Volrath, 33, (left) an American citizen who currently lives in Wisconsin, met and married his Northern Irish wife, Kylie, 32, (right) 10 years ago and she gave birth to two of their children in America 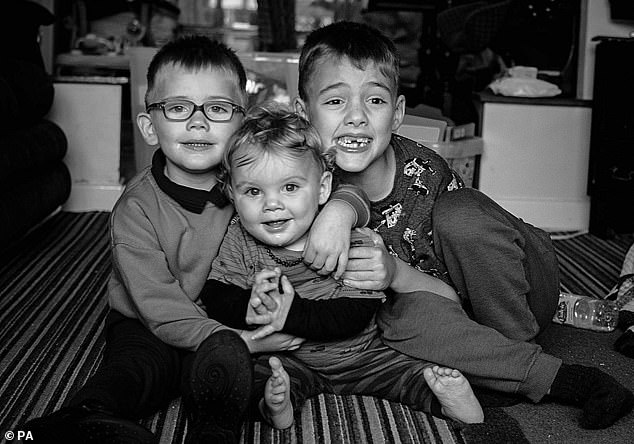 Mr Volrath had planned a trip for 10 days to see his children, Flynn, six, (right) Foster, three, (left) and Donavon, ten months, (inset) when he was detained on Sunday evening in Dublin Airport

He had planned a trip for 10 days to see his children, Flynn, six, Foster, three, and Donavon, ten months, when he was detained on Sunday evening in Dublin Airport when asked by immigration officials about the purpose of his visit.

Despite Mr Volrath having a return flight booked and having stated his intention to return home, he was arrested by gardai and taken to Clontarf Garda station in Dublin where he spent the night before being deported early the next morning.

‘I only wanted to visit my family for 10 days, then return to the US where I am employed,’ Mr Volrath said.

‘It was a surprise for my three children on my birthday and I was whisked away without the chance to see them.’

His wife Kylie Volrath said the family are devastated not to have their father home to visit.

‘It’s overwhelming, I’m feeling a bunch of emotions at once,’ she said.

‘While all this is going on, I still have to tend to kids and deal with and figure it out all by myself.

‘It’s a challenge but one we are prepared to fight.’ 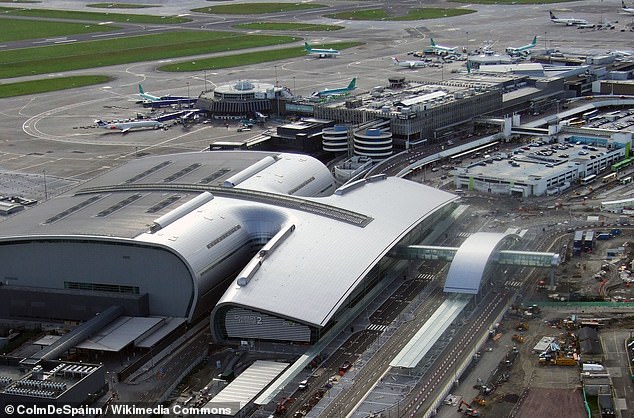 Despite Mr Volrath having a return flight booked and having stated his intention to return home, he was arrested by gardai and taken to Clontarf Garda station in Dublin where he spent the night before being deported early the next morning (pictured, Dublin Airport)

She added: ‘The boys have no idea any of this is happening.

‘We got to see each other briefly before they took him back to the airport, which was good, but Ryan is absolutely heartbroken.’

Detailed submissions have been lodged by Phoenix Law on behalf of Mr Volrath seeking to challenge the validity of Mr Volrath’s detention.

Solicitors representing Mr Volrath said they believe that the so-called ‘hostile environment’ immigration stance being implemented by the UK and current Brexit tensions are the reasons for the deportation.

‘It is hard to depart from the theory that such unwarranted and unreasonable removals are closely tied with the UK’s pending exit from the European Union, with the Irish authorities now operating a much more rigid and aggressive regime regarding entry to the North of Ireland, via Dublin Airport,’ solicitor Sinead Marmion said.

‘The UK’s pervasive hostile environment policy is being mirrored in the Irish state. This case, if left unchallenged, would set a very dangerous precedent for future individuals who seek to return home and visit their children and families.

‘In light of the reasons we have been provided to date, we remain of the view that the decision to remove Mr Volrath on Monday morning was unlawful and we have firm instructions to challenge the validity of same.

‘It is still very much our position that the Irish state’s actions have infringed our client’s human rights and we have firm instructions to initiate proceedings against the Irish state for his removal.

‘These proceedings will seek to have this incident expunged from his records, and to claim damages for his unlawful detention and infringement of his right to family life.’

A spokesman from the Department of Justice said: ‘The Irish Naturalisation and Immigration Service does not comment on individual cases.

‘Under the Immigration Act 2004, the question of entry for any individual, visa or non-visa required, is determined by the immigration officer at the time of the individual seeking leave to enter the state.’ Chrishell Stause Wrote a Letter to Justin Hartley’s Daughter After Their Breakup
We and our partners use cookies on this site to improve our service, perform analytics, personalize advertising, measure advertising performance, and remember website preferences.Ok