A jealous father-of-two placed a tracking device on his ex-girlfriend’s car so he could follow her to a secret date she was having with another woman.

David Jones, 37, suspected Stacey Buckley may have found new love after they broke up and he hid the eBay device in the boot of her vehicle to track her movements.

Later when Ms Buckley said she was going on a shopping trip in Bury, Greater Manchester, Jones noticed she had made a detour and decided to follow her.

He later found her holding hands with her sister’s ex-girlfriend Laura Flynn and laughing together in a cafe at the Trafford Centre shopping mall, a court heard. 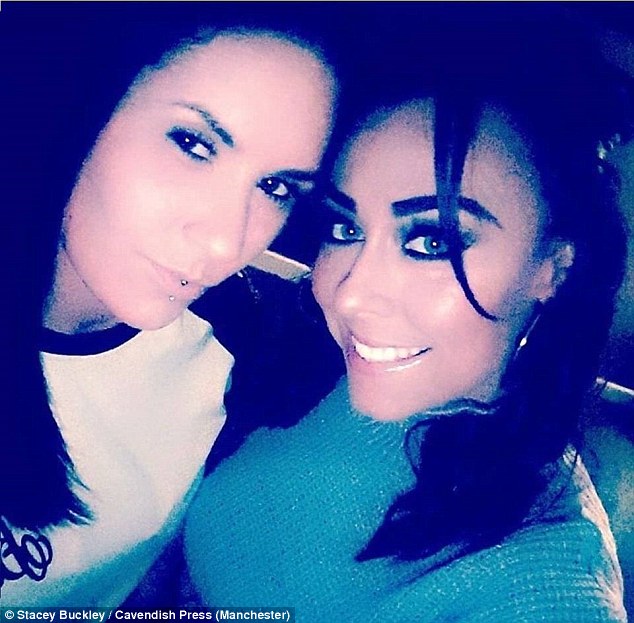 David Jones hid a tracker in the car of Stacey Buckley (right) and followed her to Bury, where he discovered that she was dating her sister’s ex-girlfriend Laura Flynn (left)

Ms Buckley found out about the device when Jones sent a bragging picture of the tracker along with the caption: ‘I’ll find you wherever you are!’

He also said he was spying on her using a phone app and Ms Buckley searched her car and found the small black ‘Rewire Security’ tracker hidden inside the vehicle.

The tracker had been bought on eBay by Jones, a construction site manager from Rochdale, and would be triggered once the ignition of Ms Buckley’s car had started.

At Manchester Magistrates’ Court, Jones was found guilty of stalking and a separate charge of assault on Ms Buckley following a confrontation at her home.

Ms Buckley told the hearing: ‘We hadn’t been happy and David moved out. We had a holiday booked in October and decided to go but we were not back together. 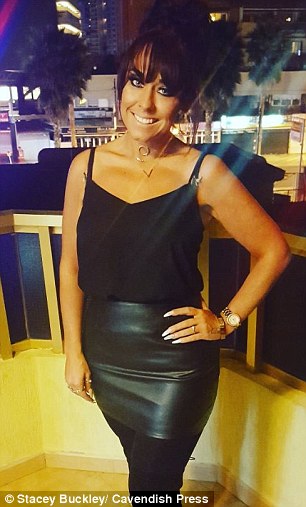 At Manchester Magistrates’ Court, Jones (pictured left) was found guilty of stalking and a separate charge of assault on Ms Buckley (right) following a confrontation at her home

‘He would constantly text asking questions and asking where I was and he started appearing in places I was.

‘I was really scared, and I thought every second of my life was being followed and watched by him even though we weren’t together.

‘He sent a picture of the tracker showing my route and location with a start and end time and I knew it related to my ignition from the car so I found the tracker.

‘He said the tracker did its job and he found out. He wanted to do it because he wanted to know where I was and he thought it was his business to know.’

Texts showed Jones admitted tracking her that suggested he was jealous of the new relationship, with one reading: ‘You must be fine but my head is gone.’ The following December, Ms Buckley was attacked by Jones during a confrontation at her home.

She added: ‘He pushed me back into the door, and then closed it behind him and began shouting at me saying he knew where I had been that day.

‘He saw red. I have never seen him be like that, and had never been domestically violent before. He grabbed my throat and pinned me against the door.

‘It was like he was looking right through me. I was pinned against the door at the bottom of the stairs. 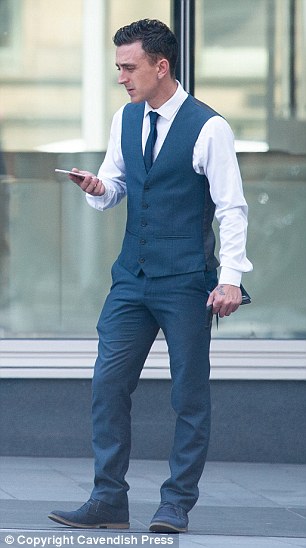 ‘I asked him to leave but he refused. He removed the lock from the front door with a screw driver so I had no lock on the door for that night.

‘He wanted to know where I was all the time. His behaviour was not reasonable at all. I suffer with anxiety because of this.

‘On one occasion I posted a Snapchat photo of my leg in bed, and he assumed it was Laura’s so he text me saying I had been seen with “my sl*t in bed”.’

Jones told the hearing: ‘It was a spur of the moment thing to place a tracker in her car. I just wanted the truth.

‘The tracker was placed in the car for four days and did a bit more than I thought. I didn’t want to follow her but it told me she was lying about where she was going.

‘She said she was going to Bury and I asked her to stop and get some T-shirts from Primark for me.

‘I checked the tracker and saw she went via Laura Flynn’s house and went to the Trafford Centre.

‘I never approached her but I saw her and Laura holding hands and laughing. I didn’t tell her straight away that I knew but I got upset and couldn’t hold it in any longer.’

Finding Jones guilty, JPs told him: ‘You didn’t care that your behaviour was unreasonable. You thought what you were doing was right but we do not agree.’

Jones will be sentenced later this month at a hearing where it is expected he will be banned from contacting Ms Buckley under the terms of a restraining order.