Father suffers terrible injuries after being knocked off his bike

Father, 26, who never rode his bike without a helmet is fighting for life after being mowed down in front of his horrified children on the ONLY occasion he left home without it 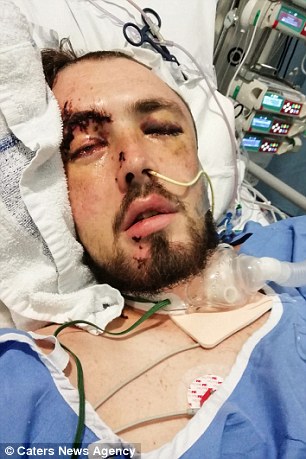 James Eves, pictured, was left fighting for his life after he was mown down by a motorist while out cycling near his home

A father who never rode a bicycle without his helmet is fighting for his life after he was mowed down in front of his two children – on the only occasion he had ever left home without it.

James Eaves was struck by a car as his horrified children watched through the windows of his home in West Heath, Birmingham.

Lifelong BMX fan, Mr Eaves, who has the phrase ‘ride for life’ tattooed on his left arm, had hoped on his bike to take the short ride to a nearby shop, but was struck down moments after leaving.

The 26-year-old was diligent about always wearing his helmet while he was out and about on his bike.

But Mr Eaves, who was about to start a new job as a B&M Bargains team manager, had for the first time neglected to wear the helmet as he dashed out to make the one-minute trip to a shop less than half-a-mile  away.

He was knocked off his bike in front of horrified kids Jack, four, and Maximus, two, by a speeding car doing an estimated 65mph in a 30mph zone.

The collision was so severe Mr Eaves broke 11 ribs, shattered his scapula, broke his back and damaged his spleen while the impact smashed the front windscreen of the red Vauxhall Corsa involved in the crash, leaving a gaping dent.

Mr Eaves’s sister Sophie Harrison-Wilkes, 29, said: ‘James was over the top with safety and always wore his helmet, even when he was just cycling to the park.

‘I think he thought the journey was that small that he wasn’t in any danger. 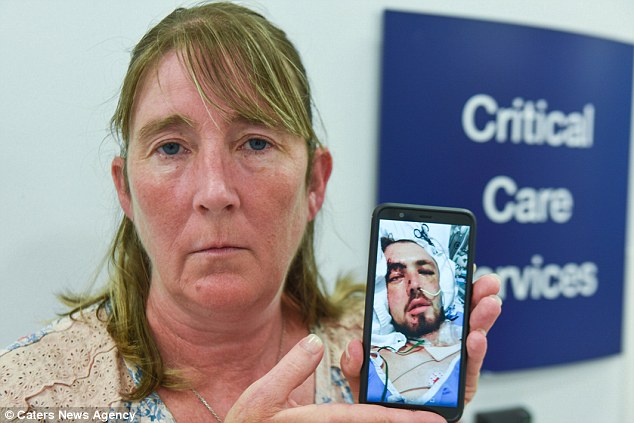 Mr Eaves’s sister, Sophie Harrison-Wilkes, 29, said it was the first time he rode his bike without wearing his helmet. Normally he would protect himself even if he was going a short distance

‘In any other occasion he’d wear his helmet but in the one instance he didn’t he’s now been left fighting for his life.. It’s horribly ironic.

‘His children were watching him out the window and saw their daddy get hit.

‘They screamed ‘daddy is dead and is lying in the road’.

‘We were told what had happened 10 minutes after the crash.

‘It was traumatic, there was blood everywhere.

‘Seeing James lying on the car was a horrible sight, I’ve never seen anything like it.

‘I’ll never get what I saw thSophie Harrison-Wilkes,at day out of my head, three weeks on I’m having flashbacks. Every time I see him, I see that scene.

‘James was given just a 10 per cent chance of making it off the operating table alive.

‘Doctors didn’t even expect him to survive for 24 hours.’

Surgeons were forced to remove half of the cyclist’s skull in a seven-and-a-half-hour operation at Birmingham’s Queen Elizabeth Hospital, during which he had just a 10 per cent chance of survival. 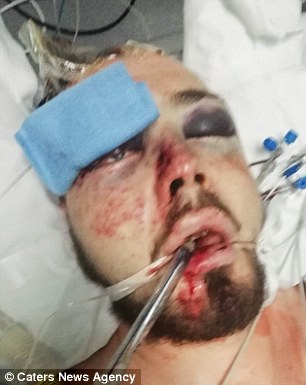 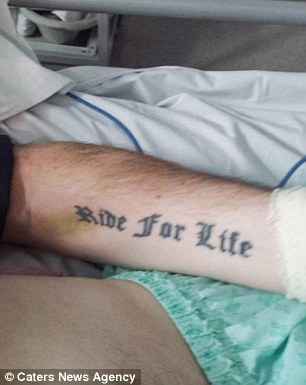 While Mr Eaves has now emerged from a coma, doctors still don’t know the scale of the brain that he may face and if he will ever make a full recovery.

His family fear he may never be able to walk again following the incident and that his home will need massive remodeling.

‘We are fighting with him and for him but none of this would be possible if it wasn’t for the fantastic care he’s received.

‘The impact on the family has been astronomical.

‘We are on a hellish roller-coaster of which we can see no end. 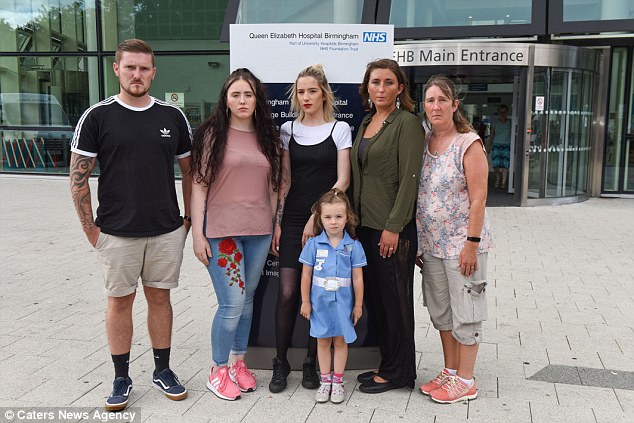 Mr Eaves’s family, pictured have launched a GoFundMe appeal to help the cyclist

‘We feel emotionally drained, exhausted and helpless, but he needs us to stay strong so we are doing exactly that.

‘We expect James to be in critical care for weeks yet.

‘Once he’s recovered physically he will then be moved to a neurological ward for several months at least.

‘From there he will be moved to residential rehabilitation, and hopefully home.

‘But we need to convert my parents garage for easy access for him.

‘We really are pleading to the public for help, this road is too rocky and long for us to do this on our own.

‘We would also like to thank the fantastic doctors and paramedics that saved James’ life that day.’

To help with the family’s fundraising: go to https://www.gofundme.com/pray-for-james-eaves.