New father, 30, avoids jail after downing bottle of vodka and refusing to put face mask on 40 times on Ryanair flight from Krakow to Manchester

A new father who downed a bottle of vodka on board a Ryanair flight before repeatedly refusing to wear a face mask and hurling abuse at cabin crew has avoided prison.

Adrian Front, 30, was on a flight from Krakow to Manchester Airport when he was told to stow his duty free booze in the overhead locker.

However, during the course of the flight, Front, of Hull, appeared to be getting more and more intoxicated, Minshull Street Crown Court heard.

He disobeyed safety instructions, ignored seatbelt signs and had to be asked at least 40 times to wear a face mask properly, the court was told.

After his bottle of whisky was seized, he repeatedly went into the rear galley to confront the cabin crew. 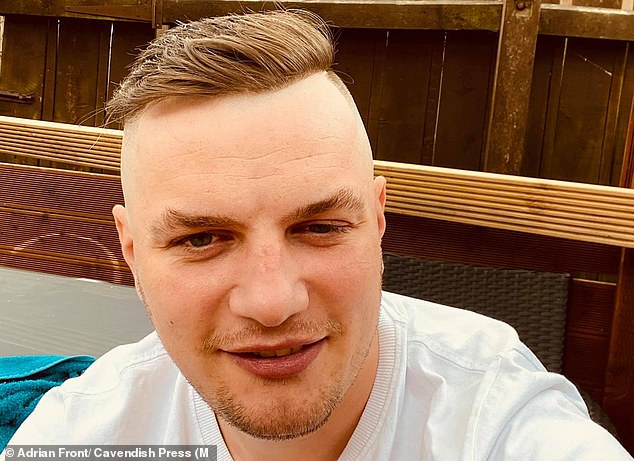 Adrian Front (pictured above), 30, was held by police at Manchester Airport after Ryanair staff reported him for consuming alcohol and repeatedly removing his face covering while onboard

Pleading guilty at an earlier hearing to being drunk on an aircraft, Front was today handed a suspended sentence.

Outlining the facts, prosecutor Kelly Cyples said Front was seated at the rear of the Ryanair flight on January 29 of this year.

Before take off he was told he couldn’t consume his own alcohol and agreed to put it away.

It was only as the flight progressed that staff became aware of Front refusing to follow the cabin’s safety instructions.

‘He ignored the seatbelt sign, he had to be told at least 40 times to wear his face mask over his nose and mouth and he kept removing it each time staff walked past,’ Ms Cyples said. 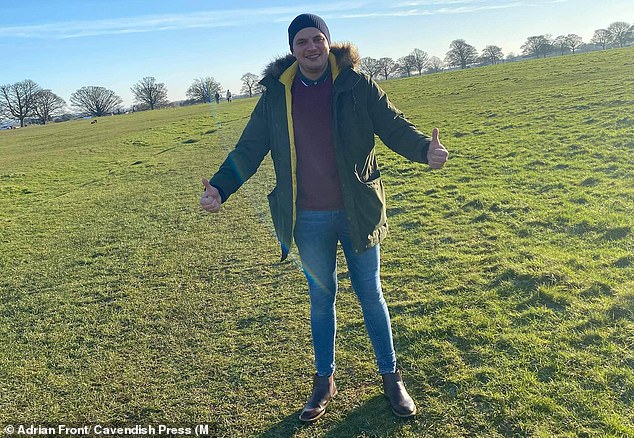 Front, above, initially refused to leave the plane on landing in Manchester but was eventually persuaded and met by police officers at which point he was arrested and taken into custody

‘He would also enter the rear galley in order to argue with staff about his whisky which had already been confiscated.

Even when the flight had landed in Manchester, Front was pressing the call button ‘multiple times’ to ask where his whisky was, the court heard.

Front was sat near to a woman with two young children who had to ask the cabin manager to stand with her children when she needed the toilet due to the fact she was ‘so intimidated’ by him.

‘The defendant was a constant nuisance throughout the flight and the cabin manager confirmed that this caused her and the other crew members to have to speak to him multiple times when they should have been doing other duties,’ Ms Cyples continued.

‘The police were requested to meet the aircraft on arrival and officers seized from the defendant one bottle of vodka, 500ml, of 30pc alcohol, and that bottle was empty. 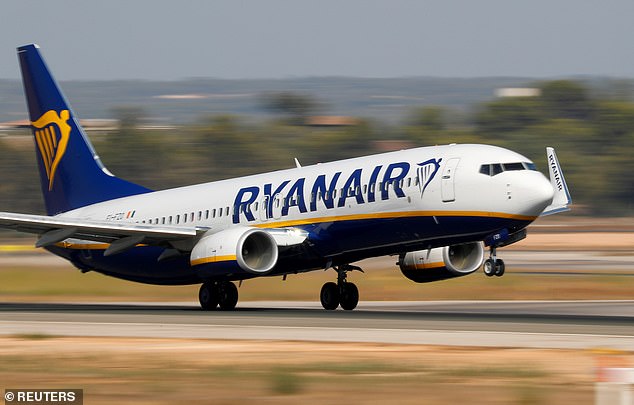 At court, Front admitted being drunk on an aircraft and he was handed a six month sentence of imprisonment which was suspended for 18 months as well as £500 fine and unpaid work order

‘The second bottle was whisky, that was one litre and contained 40pc alcohol, there was half still remaining.’

Front initially refused to leave the plane but left after ‘some persuading’ and was arrested.

He was said to have no previous convictions.

Mitigating, Gwen Henshaw said her client is ‘mortified by his actions’ and himself and his family have been ‘shamed’ by it.

‘He cannot really explain what happened on that aircraft – he doesn’t drink an awful lot normally.

‘He was extremely saddened at having to leave behind his partner and their new baby having been home to help plan it’s baptism.’

Passing sentence, Judge Angela Nield said: ‘You were travelling in a time of heightened crisis by virtue of the pandemic.

‘The usual safety requirements were therefore heightened as no doubt were the anxieties of your fellow passengers.

‘You were abusive to the cabin crew who were simply doing their job.’

Front, of Welland Road, was handed a six month sentence of imprisonment which was suspended for 18 months, 150 hours unpaid work and ordered to pay a £500 fine.