FBI wanted to arrest Jeffrey Epstein at beauty pageant in 2007

The FBI wanted to arrest Jeffrey Epstein in 2007 in the U.S. Virgin Islands while he was judging a beauty contest but it did not — in a missed opportunity the buruea's supervisory special agent was "extremely upset" about.

The new details are included in a 350-page report from the Justice Department's Office of Professional Responsibility (OPR) about the origins of how Epstein came to secure a cushy secret plea deal in 2008 that allowed the late financier to spend just 13 months in a Florida jail with the privileges of enjoying a daily work release program.

The report, obtained by Fox News, found that Marie Villafaña, who was lead prosecutor in the Florida investigation of Epstein, had “intended to file charges by May 15, 2007 and the FBI planned to arrest Epstein immediately thereafter. Villafaña, however, had not obtained authorization to indict on the schedule.”

In fact, the report quotes one prosector saying the FBI had “wanted to arrest [Epstein] in [the] Virgin Islands during a beauty pageant … where he is a judge.”

Villafaña wanted Epstein, who had been accused of sexually abusing dozens of girls, to face as much as 210 months — or 17-and-a-half years — behind bars.

Two weeks after submitting the prosecution memorandum, on May 14, Villafaña informed others by email that Epstein was flying to New Jersey from the Virgin Islands — and when she asked if she could file charges the next day, she was told "No" because Alex Acosta, then the U.S. attorney for the Southern District of Florida, was “at an out of town conference” and Acosta wanted “to take his time making sure he is comfortable before proceeding.”

One of the prosecutors could not understand why Villafaña was in a “rush” with a case that had been pending for so long.

Villafaña said she “could not seem to get [her supervisors] to understand the seriousness of Epstein’s behavior and the fact that he was probably continuing to commit the behavior, and that there was a need to move with necessary speed.”

Two months after Villafaña had wanted to arrest Epstein, Acosta decided to offer Epstein a two-year state plea to resolve the federal investigation with a secret plea deal that became the subject of a Justice Department report released this week.

Negotiations would take place in secret with Epstein’s defense team — without Epstein’s victims knowing about it — for about a year before Epstein pleaded guilty under a non-prosecution agreement in 2008 negotiated by Acosta.

The Justice Department report, released this week, faulted Acosta for exercising “poor judgment” in handling the investigation into Epstein when Acosta was the top federal prosecutor in Florida. But it also said Acosta did not engage in professional misconduct. 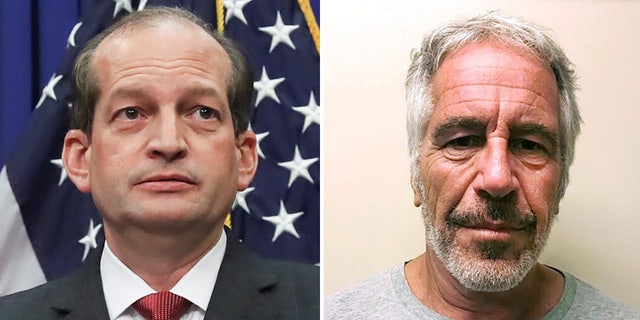 Alex Acosta, left, a former U.S. attorney for the Southern District of Florida, has faced scrutiny over a plea deal negotiated with Jeffrey Epstein, a financier who faced sex-crime charges.

In a statement, Acosta expressed vindication at the report’s conclusion, saying it “fully debunks” allegations that he had cut a sweetheart deal for Epstein. He said the report confirmed his decision to move forward with the plea deal, which resulted in a jail sentence and a sex offender registration for the financier.

Villafaña, who was assistant U.S. attorney for the Southern District of Florida, said she wished the OPR released the full report so that the victims and the public could "have a fuller accounting of the depth of interference that led to the patently unjust outcome in the Epstein case.”

She went on to say, “That injustice, I believe, was the result of deep, implicit institutional biases that prevented me and the FBI agents who worked diligently on this case from holding Mr. Epstein accountable for his crimes.”

“Letting a politically connected billionaire get away with child rape and international sex trafficking is not merely 'poor judgment.' It is wrong, and people should be held to account,” Boies said to Fox News.

Brad Edwards, an attorney for several of Epstein's victims, called the Justice report a “disappointing sidestep of the issue.”

“We are left still wondering why Jeffrey Epstein got the sweetheart deal he did and who exactly made the decision to transform a lengthy sex trafficking indictment into a non-prosecution agreement.”

U.S. Sen. Ben Sasse, R-Neb., said, “Americans ought to be enraged” about details in the Justice report regarding the sweetheart deal for Epstein.

“Letting a well-connected billionaire get away with child rape and international sex trafficking isn’t ‘poor judgment’ — it is a disgusting failure,” Sasse wrote. “Justice has not been served.”

Epstein was arrested again in July 2019 on federal sex trafficking charges in Florida and New York.

Acosta later became President Trump's labor secretary but resigned from the administration after renewed scrutiny over the Epstein case.

Epstein was found hanging in a New York City jail cell from an apparent suicide in August 2019 as he awaited legal action on his case. Amanda Bynes Debuts New Dark Hair Makeover While Holding Hands With Fiancé In Rare New Pics
We and our partners use cookies on this site to improve our service, perform analytics, personalize advertising, measure advertising performance, and remember website preferences.Ok