Federal Cities and Urban Infrastructure Minister Alan Tudge has defended a decision to give NSW more than double the amount of funding for infrastructure projects than Victoria in the upcoming budget, despite the state's dire need for help in recovering from economic fallout of COVID-19.

Victoria's coronavirus lockdown continues to drag on the nation's economy, with jobs lifting in all states and territories aside from Victoria last month. 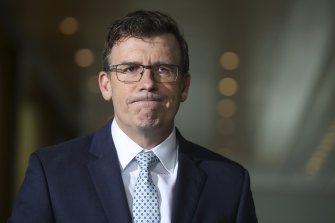 On Monday, the federal government announced NSW would receive $2.7 billion for "shovel-ready" projects, as part of a $7.5 billion package in Tuesday's budget, while revealing just $1.1 billion had been earmarked for Victoria.

The Victorian funding is set to go to accelerated projects, including upgrades of the Shepparton, Warrnambool and South Geelong to Waurn Ponds rail lines, as well as a number of smaller scale projects in Melbourne, and is expected to create 4000 jobs.

Minister Tudge defended the carve up of money for projects, stating that the Victorian government had been granted funding for all of its requested "wish list" bar one project, and that 30 per cent of all federal coronavirus payments had gone to Victorians already.

"We are absolutely funding the things which the state government has requested that can be done immediately. And that's the criteria," he told ABC Radio Melbourne's Virginia Trioli on Monday.

"By the end of this year, Virginia, 60 per cent of the entire JobSeeker program funding will be going through Victorians – 60 per cent."

Mr Tudge in turn put pressure on the Victorian government to revisit building the scrapped East West Link to create more jobs in the state.

"One of the biggest ones that, obviously, we've been pushing forth for some time, has been the East West Link, where we have $4 billion still sitting there as a contingent liability, wanting to be spent. And that's the entire public funding for that massive project, which would support another 4000 people," he said.

"When you have unemployment, which is going to be above 10 per cent, possibly higher here in Victoria, which is not seen since the early 1990s, then we need to re-examine some of these things."

Premier Daniel Andrews wouldn't be drawn on whether it was unfair that NSW was set to receive more than double the amount of funding as his own state, but did hit back at the Transport Minister's suggestion that the East West Link was a "shovel-ready" proposition.

"I don't know it is ['shovel-ready'] actually. I think it would have to be restarted from pretty much a standing start. You wouldn't be employing too many people on that for quite a long time," he told reporters at his daily coronavirus briefing.

"My views and the views of the Victorian electorate are very well understood on that issue. I will not waste your time or mine on having arguments about."

The Andrews government dumped the East West Link tollway in 2015 at a cost of more than $1 billion, saying it did not stack up. Victoria then refused to accept $4 billion from the Morrison government in 2019, claiming the total project would cost more than $11 billion.

Mr Tudge also used media appearances on Monday to advocate for the proposed Rowville rail line to be brought forward. Victorian Transport Minister Jacinta Allan, who negotiated the funding projects with the federal government, said Rowville was not a shovel-ready project.

She suggested Mr Tudge may have been motivated by political self-interest in pushing for the project as it falls in his electorate.

"He's certainly keen on it … as both a minister and as a local member and that's okay, it's totally understandable for members of Parliament to want to focus on both of those areas," she told ABC Radio Melbourne.

"When it comes to this budget, this year's federal budget, and this year's state budget, the focus has very much been on getting money into projects that are ready to go and, as I've just indicated to you, that Rowville project is in the planning stages.

"We have to think about how a light rail connects to the suburban rail loop, which is a big important orbital rail project that will connect the suburbs of Melbourne. So, in terms of the planning, that's still got quite a bit of work to be done in the planning stages to get that project in alignment and in the right place.

Minister Allan said all the nominated projects announced on Monday were those that could be started in the next 12 months.