Girl power! High school girls’ rugby team pushes 12,000lb ambulance carrying their injured teammate, 16, out of ditch after it got stuck in mud

This is the incredible moment a rugby team made up of teenage girls freed a stuck ambulance that was carrying their teammate to hospital.

The team from Chateauguay Valley Regional High School in Quebec, Canada showed off their strength by helping the ambulance out of the mud after a 16-year-old player injured her neck in a ‘brave sprint and attempt to tackle a girl from the other team’ while playing their first game of the season.

The girls first kneel around their injured teammate as she is loaded into the back of the ambulance.

As the ambulance begins to drive away, it is halted and the wheels spin in the mud.

Without hesitation, the team rally around the ambulance and work together to push the vehicle out of the mud to an array of cheers and applause from family and friends watching the match.

Laura Ykema was watching her sister Alyssa, 16, play when she recorded the clip.

She later posted it to Facebook saying: ‘Today I witnessed team spirit in its most purest forms. After a very brave sprint and attempt to tackle a girl from the other team at the goal line, a CVR player went down and hard. After taking a knee from the rest of the team out of respect and no movement from said girl, the ambulance arrived. The terrain was still wet and muddy but the ambulance made it to the immobile brave soul.

‘Once loaded up, the rest of the team returned to their bench. When the ambulance went to take off, it got stuck in the mud and was spinning. Before the crowd could even realise what was going on, with no hesitation, the entire team ran over and pushed the 12,000 lbs machine out of the mud so that their team mate could get the much needed urgent care that she needed ASAP. 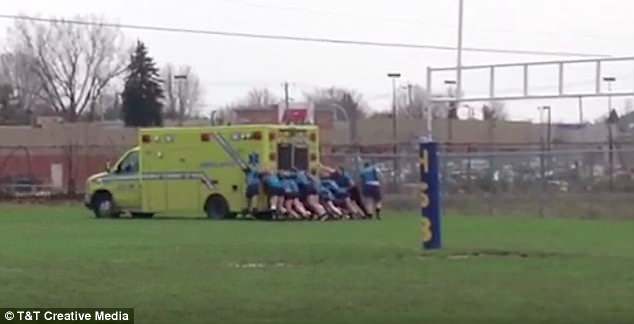 Now that’s team spirit! The group of girls rally together to push the ambulance out of the mud and help their injured teammate 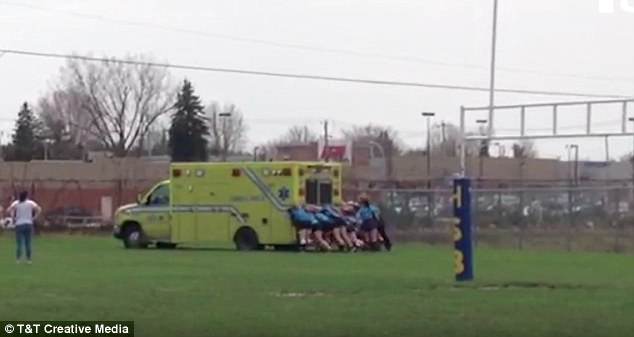 The team from Chateauguay Valley Regional High School in Quebec, Canada showed off their strength by helping the ambulance out of the mud

‘It touched my heart. I am proud of every single one of these girls and admire the team spirit I witnessed. Despite the loss of the game (26-17), they played a hell of a game and will get the next one’.

The injured player was back in school the following day and the ambulance showed up as a precautionary measure, the school’s principal Brigitte Barrette told CTV news. 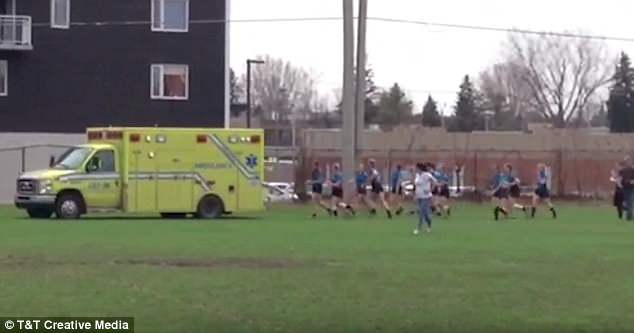 Freedom! After the team successfully got the 12,000lb ambulance from the mud they continued the game