‘Taking the day off to see a triple-bill’: ‘Gutted’ film fans plan movie binges as they visit Cineworld for the last time before chain closes 127 venues ‘until further notice’ from tomorrow

Film fans flocked to Cineworld cinemas for the last time before they shut indefinitely tomorrow after the delay of the release of a string of long-awaited blockbusters.

Some cinema-goers plan to see up to three movies in a day today, before the chain temporarily closes 127 Cineworld and Picturehouse sites across Britain.

Odeon has said 30 of its 120 sites will be shut during the week as social distancing and people’s fears of catching coronavirus mean viewers are staying at home.

Showcase Cinemas has said it remains ‘committed’ to keeping its theatres open, while Vue could consider the temporary closure of cinemas to survive the winter.

The future of cinema chains around the world has been hit by the announcement that James Bond film No Time To Die has been pushed back to April 2021.

Marvel film Black Widow, sci-fi blockbuster Dune and Jurassic World: Dominion are among other movies that have seen release delays as a result of the pandemic. 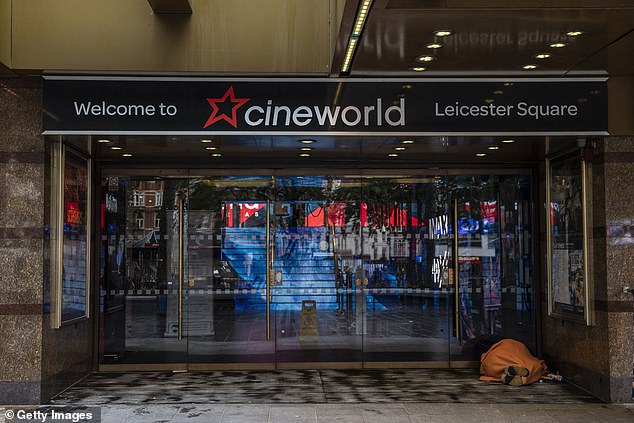 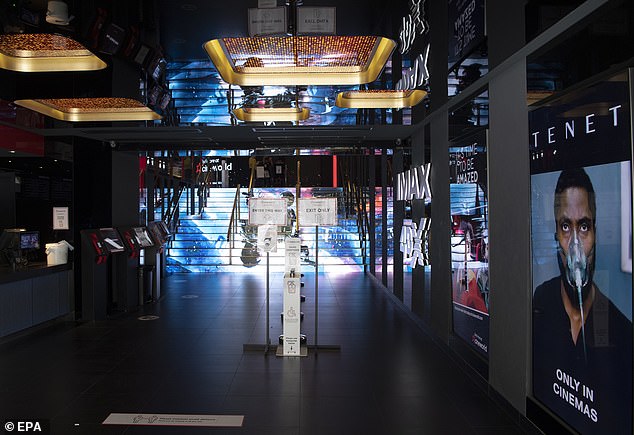 The Batman has also been delayed, with Warner Brothers saying it will push back the release of the epic starring Robert Pattinson from October 2021 until spring 2022.

Cineworld did not say how many jobs are at risk in the UK, but 5,500 are expected to be hit – and it will also close sites in the US, where the Regal chain also followed suit.

What is happening at the UK cinema chains?

Cineworld: All cinemas closed until further notice from tomorrow

Picturehouse: All cinemas closed until further notice from tomorrow

Odeon: Thirty of its 120 sites will be shut during the week

Vue: All cinemas still open, but it is ‘looking at all options’ to survive

Empire: 14 of its 131 sites will only be open from Friday to Sunday

Among those tweeting about their plans for a last-minute film binge at a Cineworld branch was Pat Kelman, who said: ‘Taking the rest of the day off to do a triple bill at Cineworld Plymouth today.

‘It’s their last day for the foreseeable, and I’ve been an Unlimited member since it started. Very excited to see Akira in Imax.’

Rich Walker added: ‘Last trip to Cineworld for the foreseeable future, a double bill of Akira in Imax and Saint Maud. I’m not gonna lie, I’m really gutted about this and hope they reopen soon.’

And Alan Laws tweeted: ‘Final Cineworld visit until it reopens. Will miss it and hope it comes back soon. Thank you also to the excellent staff at Edinburgh branch who are so professional when facing so much uncertainty.’

Odeon and Vue have shared their concerns over the situation and Prime Minister Boris Johnson has acknowledged there will be ‘tough times ahead’ in the jobs market following the Cineworld announcement, but encouraged people to go to the movies.

It had been hoped that the release of Christopher Nolan’s time-bending thriller Tenet would provide a shot in the arm for the cinema industry and lure audiences back to multiplexes after months of closure during lockdown from March to July.

The film, starring John David Washington and Pattinson, made more than £5million at the UK and Ireland box office in its opening weekend alone.

But ticket sales have been disappointing in the US, where major markets Los Angeles and New York remain closed. 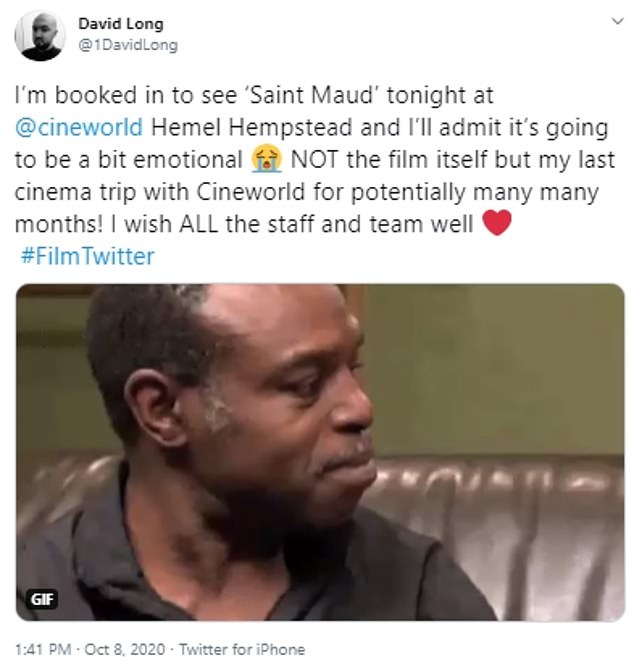 It has so far taken £228million – much less than Nolan’s previous film Dunkirk, which took £400million. The subdued response spooked executives and sparked a rash of postponements.

The plot has thickened at Cineworld after a secretive Chinese millionaire hiked his stake in the cinema chain.

Liu Zaiwang made his fortune in construction business in the 1990s during the country’s building boom.

But his interest in Cineworld since the Covid crisis triggered a catastrophic drop in its share price and has stoked speculation he could bid for the beleaguered and debt-laden giant.

He built up a 5 per cent stake over the summer through his Jangho Group vehicle. This has now been beefed up to 8.6 per cent, according to a stock market filing on Monday.

This makes the enigmatic Zaiwang, whose wealth is said to top £610million, the company’s second-largest shareholder behind chief executive Mooky Greidinger.

Rapidly building up a large holding during a crisis often suggests a takeover could be on the table – but his intentions are still unknown.

What is clear is that he made the move on Monday, when Cineworld confirmed reports that it would need to shut more than 660 cinemas following the latest delay to the release of the James Bond film, No Time to Die.

Filmmakers have expressed their sadness at the news over Cineworld, with Baby Driver director Edgar Wright saying: ‘As a film goer, I’m gutted about the Cineworld and Picturehouse shutdown.

‘There is more to say and do on this, but it’s worth stressing that when I went to Picturehouse Central they went out of their way to make it a safe experience. My heart goes out to all staff affected by this.’

Game Of Thrones actress Laura Pradelska told ITV’s Good Morning Britain that she would be ‘devastated’ if the movie-going experience was lost.

She added: ‘I love going to the cinema by myself, especially as an actor, where there are times where they don’t work every day necessarily, it’s wonderful to go and watch a movie during the afternoon and it’s also something inclusive.’

However, The Thirty Nine Steps actor Robert Powell told the programme: ‘I think cinemas have only got themselves to blame in many ways. It’s no experience to go and sit while somebody is sitting next to you eating cheesy nachos.

‘This idea of eating in cinemas randomly, and eating junk food as well, because it’s not as if you are going to be eating a salad or anything like that, it’s not a great experience.’

Cinemas had been pinning their hopes on the highly anticipated Bond movie – set be the last featuring actor Daniel Craig.

It had originally been due for release in April, but was postponed to November. The release date has now been put back to April next year.

Cineworld’s boss said earlier this week that the company would have been ‘like a grocery shop with no food’ after film studios delayed several major releases because of the Covid-19 crisis.

Speaking to Sky News, chief executive Mooky Greidinger hit out at the film studios and said it needed to shut cinemas down to save jobs.

‘From a liquidity point of view, we were bleeding much bigger amounts when we are open than when we are closed… we would be like a grocery shop with no food – we had to take this decision.’ 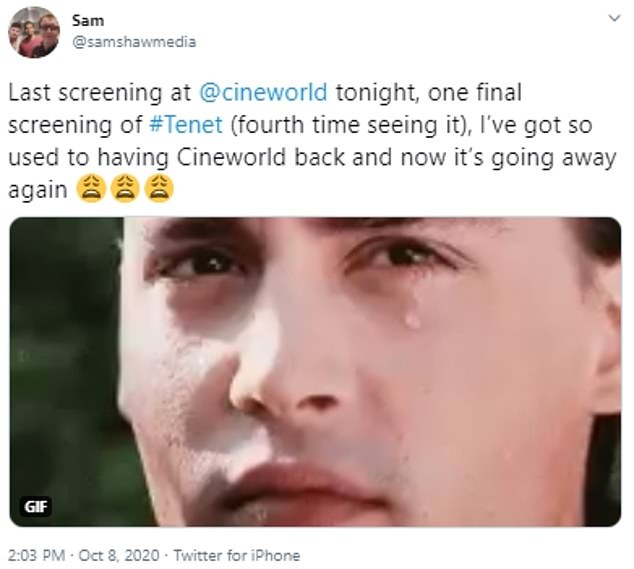 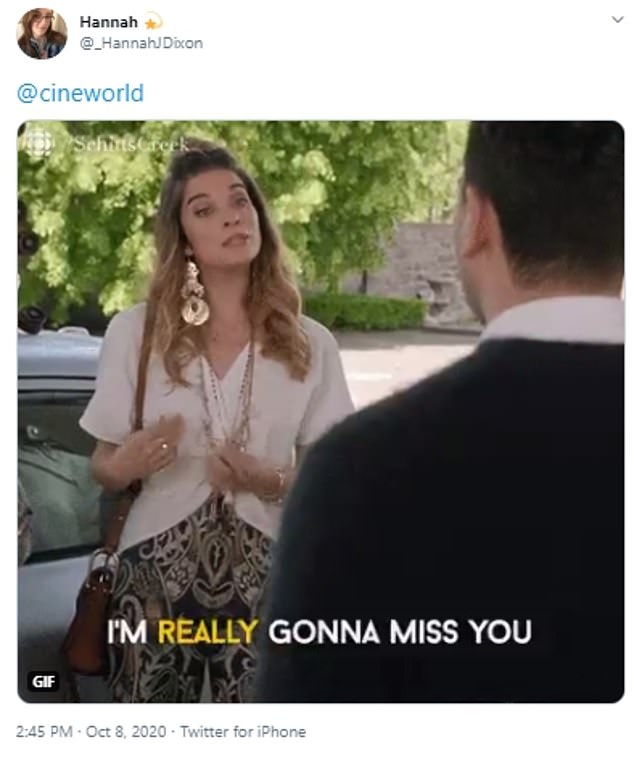 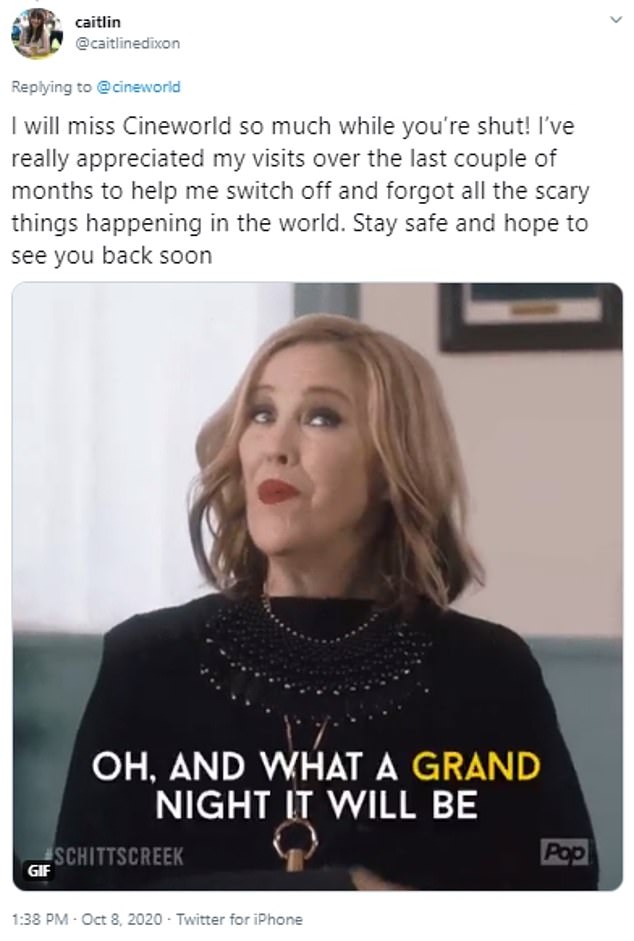 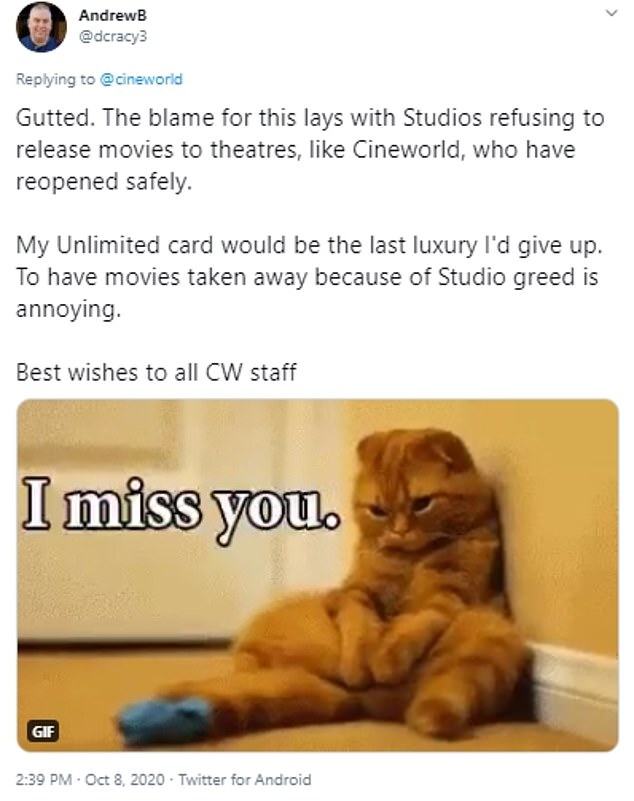 Cineworld was already in a precarious financial situation when the pandemic hit, and is weighed down by a £6.2billion debt mountain.

Advisers have been parachuted in to grapple with the operators’ vast debts.

Analysis: Covid horror story for Cineworld as it is forced to close its venues

The beleaguered entertainment industry has taken another huge blow with the confirmation that all of Cineworld’s venues will close their doors temporarily, affecting 45,000 jobs in the UK and the US. Although the delay of the latest 007 blockbuster prompted the decision, Bond isn’t the villain in this piece. The spread of Covid-19 around the world has been a horror movie for the industry and the fresh wave of infections is the latest installment in what’s been a devastating story for cinema chains.

New infection spikes amid warnings that the virus spreads more quickly indoors, is keeping customers away and with no big names to lure them through the doors this winter, Cineworld has reached this difficult decision in a bid to cut costs and preserve cash. With a vaccine still just out of reach, Cineworld won’t put a date on when venues will reopen next year and is now assessing various sources of additional liquidity, including raising cash from shareholders to try and stay afloat.

All operations will be suspended at 536 theatres in the US and 127 Cineworld and Picturehouse theatres in the UK on Thursday. The news will increase the clamour for more support for the entertainment, recreation and arts industry which still has 51 per cent of workers on furlough.

The new jobs support scheme, which will subsidise wages of part time workers will provide no lifeline for the 5,500 Cineworld UK employees who will lose their jobs this week and many others across the industry are facing a bleak winter on jobseekers benefit, while they begin the difficult search for new positions in the run up to Christmas.

The cinema industry has turned fire on film studios and distributors for delaying the release of potential blockbusters during the pandemic.

The Broadcasting, Entertainment, Communication and Theatre Union, which represents staff in the cinema sector, said the Cineworld closures were ‘entirely the result’ of potential blockbusters being delayed.

Philippa Childs, head of Bectu said: ‘Cinemas are currently able to operate safely so this decision is entirely the result of distributors choosing to delay the release of blockbusters in the hope of making extra money further down the line.

‘This is short-sighted in the extreme and if other chains follow Cineworld’s lead it’s hard to see how there will be a fully functioning industry to return to in six months’ time.’

On Monday, film-lovers were urged by Boris Johnson to go the movies as the UK’s biggest cinema chains battle to survive the winter.

The Prime Minister acknowledged there would be ‘tough times ahead’ but urged Britons to support their local cinemas.

‘Obviously we hope to reduce, to keep the numbers of people who lose their jobs down as much as we can, but clearly there are going to be tough times ahead,’ he said.

‘That’s why we’ve already invested £190billion in supporting jobs, livelihoods around the country.

‘Supporting local cinemas – I think we’ve already put £30million in, but what I would say is local cinemas do have ways of making their shows go on in a Covid-secure way and I’d encourage people to go to the cinema, enjoy themselves and support those businesses.’

Independent cinemas can apply for emergency grants after a £30million bailout, but there are fears that many will still not survive.

Earlier this week, the boss of Vue said it was ‘looking at all options’ to survive the winter, including the temporary closure of its cinemas.

Tim Richards told BBC Radio 4s Today programme it is aiming to retain all 5,500 UK staff, but said: ‘We just need to make it through the next three or four months where there are no movies.’

He added: ‘ We’re likely going to make it through; I’m concerned about the independents and the small regional operators right now that are going to really struggle and when they close they may not reopen.’ Thousands of people who work in the cinema industry effectively face being put into hibernation with no guarantee they will have a job when the crisis fades.

In the meantime they will not receive any support from the Government’s furlough scheme, which closes at the end of the month and has been shut to new entrants since June 30.