Fire chief told to STAY AWAY from UK reception over coronavirus

A right Royal snub! Prince Charles tells Australian fire chief to STAY AWAY from a Buckingham Palace reception over coronavirus fears – weeks after he was invited to meet the future king

The face of the heroic effort to battle Australia’s horrific bushfire season has had his trip to the UK to meet Prince Charles cancelled over coronavirus fears.

Hollywood actor George Clooney and singer Tom Jones are on the bill for the glitzy London event, but the virus’ growing worldwide spread has prompted the charity to tell international guests to stay away. 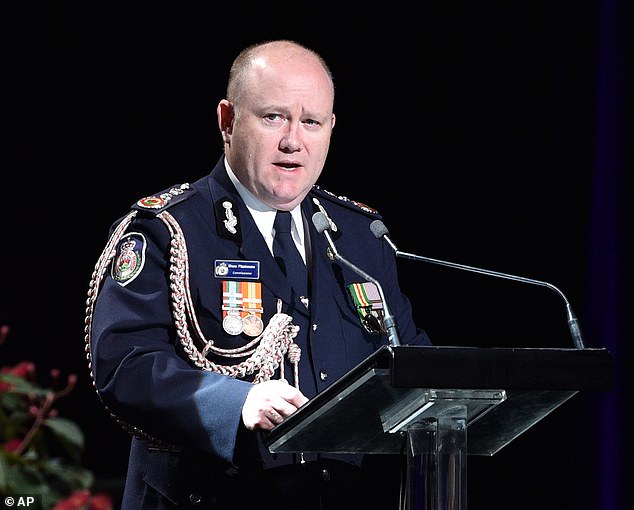 New South Wales Rural Fire Service commissioner Shane Fitzsimmons has revealed his disappointment after his trip to Buckingham Palace in London to represent firefighting volunteers was cancelled over coronavirus fears. He is pictured at the state memorial service for victims of this year’s fire season last month

‘It is with deep regret that we need to inform you that the Prince’s Trust UK has advised international guests, including staff and patrons, should not travel to London, or attend any of the events,’ Prince’s Trust Australia chairman John Landerer said in the letter.

‘No staff or Trustees from the Prince’s Trust Australia will be travelling to the UK. This, of course, is very disappointing but, due to the national outbreak of the COVID – 19, completely understandable.

‘The main fear is that visitors may not be able to leave London. This would be most unfortunate. We feel, however, you will agree it is for the better.’

The palace has emphasised the advice is intended to be guidance rather than an order, The Daily Telegraph reported. 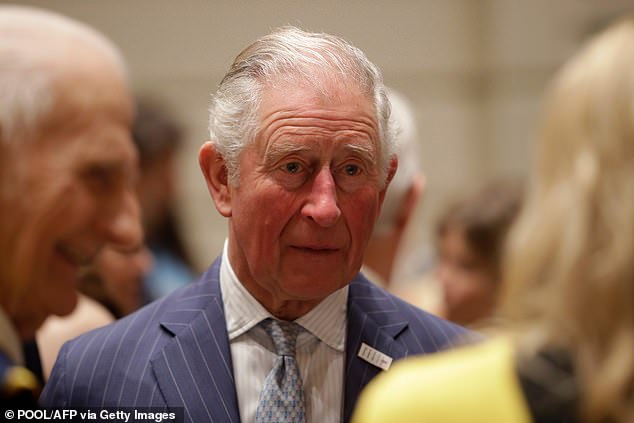 The monarch-in-waiting is pictured at the Royal College of Music in London on March 3. His Prince’s Trust charity said it was worried international guests may not be able to leave the UK 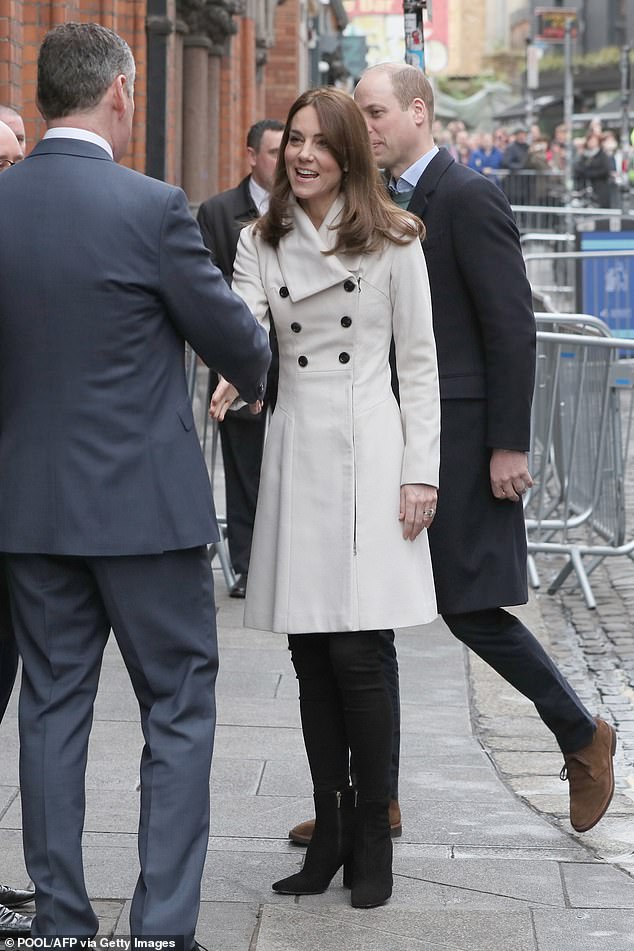 Despite the snub, Prince Charles’ son William and his wife Kate Middleton – the Duke and Duchess of Cambridge – were busy shaking hands (pictured) on a royal trip to Ireland on Wednesday

NSW’s fire chief would have been in attendance to represent firefighting volunteers, who helped fight the unprecedented blazes that killed 33 people and at least a billion animals nationwide – as well as destroying 2,000 home.

Despite the snub, Prince Charles’ son William and his wife Kate Middleton – the Duke and Duchess of Cambridge – were busy shaking hands on a Royal trip to Ireland.

More than 90,000 people have been infected worldwide with coronavirus as of Thursday. 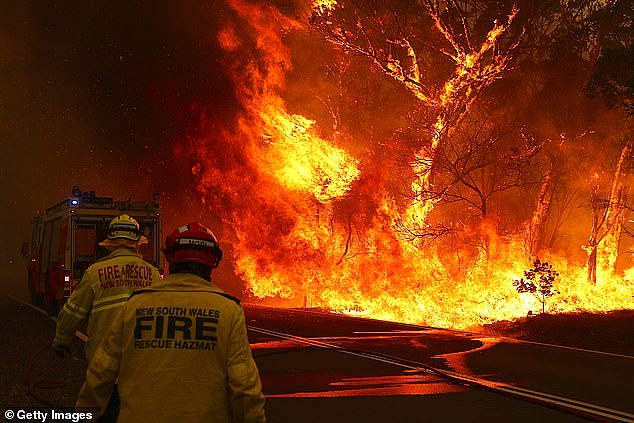 NSW’s fire chief would have been in attendance to represent firefighting volunteers, who helped fight the unprecedented blazes across New South Wales and Australia

While there is no travel ban between Australia and the UK, Prime Minister Scott Morrison said bans were being considered in virus hotspots Italy and South Korea.

It comes as a 95-year-old became the second to die in Australia from the coronavirus.

The woman, who was earlier confirmed to have the virus, died at a Sydney hospital on Tuesday night after developing a respiratory illness.

The Prince’s Trust in Britain and Clarence House were both approached for comment by MailOnline today.

CORONAVIRUS CASES IN AUSTRALIA CLIMB TO 52

Three men aged 43, 53, and 35 who had recently travelled to China contracted the disease.

Two flew in from Wuhan while the other arrived in Sydney from Shenzhen, south China.

They were treated in isolation at Westmead Hospital.

A 21-year-old woman is identified as the fourth person to test positive for the illness in NSW.

The woman, a student at UNSW, flew into Sydney International Airport on flight MU749 on January 23 and presented to the emergency department 24 hours later after developing flu-like symptoms.

A man in his 40s is confirmed as the fifth coronavirus case in the state and a woman in her 50s as the sixth. Both returned to Sydney from Iran.

The 41-year-old sister of a man who had returned from Iran with the disease was one of three confirmed cases. The second locally-acquired case was a 53-year-old male health worker who hadn’t travelled for many months.

The other new case is a 31-year-old man who flew into Sydney on Saturday from Iran and developed symptoms 24 hours later.

Two women aged in their 60s who arrived in Sydney from South Korea and Japan respectively were also confirmed.

A man in his 30s who returned from Malaysia to Sydney on Malindo Air flight OD171 on March 1 was also confirmed infected.

A 50-year-old woman is diagnosed with coronavirus. The woman is a carer at a nursing home in Macquarie Park in Sydney’s north. She had not been overseas and contracted the virus in Australia.

A 95-year-old woman died at a Sydney hospital on Wednesday night after developing a respiratory illness from the coronavirus, bringing the death toll to two.

A Macquarie University lecturer tested positive for coronavirus on Wednesday after returning from Iran.

A further six cases confirmed on Wednesday evening. They included an 82-year-old aged care resident from the Dorothy Henderson Lodge, where the 95-year-old woman was staying.

The new cases include a female doctor who works at Liverpool hospital, a female patient from the Northern Beaches, a male from Cronulla, a woman who returned from the Phillippines and a woman in her 70s.

A Chinese national aged in his 50s becomes the first confirmed case of the coronavirus in Australia.

The man flew to Melbourne on China Southern flight CZ321 from Wuhan via Guangzhou on January 19.

He was quarantined at Monash Hospital in Clayton in Melbourne’s east.

A Victorian man in his 60s is diagnosed with the coronavirus.

He became unwell on January 23 – two days after returning from the Chinese city of Wuhan, the epicentre of the outbreak.

The man was confirmed as positive on January 29 and was subsequently seen by doctors at the Monash Medical Centre.

A woman in her 40s is found to have coronavirus.

She was visiting from China and mostly spent time with her family.

She is being treated at Royal Melbourne Hospital.

A woman in her 20s in Melbourne is found to have the virus.

Another passenger taken off the cruise ship tests positive.

Victorian man confirmed to have coronavirus after the 78-year-old was evacuated to Melbourne from a Darwin quarantine centre.

It is confirmed a Victorian woman in her 30s has tested positive for coronavirus after flying from Malaysia to Melbourne via Indonesia.

Victorian man in his 30s confirmed to have coronavirus after returning from Iran. Health Minister Jenny Mikakos said the man was ‘almost symptom-free’ after self-isolating

Queensland confirms its first case after a 44-year-old Chinese national was diagnosed with the virus. He is being treated at Gold Coast University Hospital.

A 42-year-old Chinese woman who was travelling in the same Wuhan tour group as the 44-year-old man tests positive. She is in Gold Coast University Hospital in stable condition.

An eight-year-old boy was diagnosed with coronavirus. He is also from the tour group where the other Queensland cases came from.

A 37-year-old man, who was a member of a group of nine Chinese tourists in quarantine on the Gold Coast, also tested positive.

A 37-year-old woman was diagnosed with coronavirus from the same travel group that flew to Queensland from Melbourne on January 27.

Two Queensland women, aged 54 and 55, tested positive for COVID-19 and will be flown to Brisbane for further treatment.

A 57-year-old woman from Queensland also tested positive for the virus.

A 63-year-old woman was confirmed to have the virus after returning to the Gold Coast from Iran.

A 20-year-old man from China was confirmed as the tenth person to be infected by the coronavirus in Queensland. The man had travelled to Dubai for at least 14 days before entering Australia, via Brisbane on February 23.

A 26-year-old man from Logan in Brisbane is diagnosed with coronavirus. He arrived back in Australia from Iran.

A Chinese couple in their 60s who arrived in Adelaide from Wuhan to visit relatives are confirmed to have coronavirus.

A 24-year-old woman from South Australia was transferred to Royal Adelaide Hospital.

Mother, 40, is diagnosed after flying to Australia from Iran via Kuala Lumpur.

Another 24-year-old woman, not related to the previous woman, was in a stable condition in Adelaide hospital after falling ill following overseas travel.

A 78-year-old man from Western Australia was transferred to Sir Charles Gairdner Hospital in Perth. On February 28, he was taken into intensive care in a ‘serious’ condition and later died.

The elderly man died in the early hours of the morning from the virus at Sir Charles Gairdner Hospital.

The man who travelled from Iran to Australia on Saturday tested positive for COVID-19.

A tourist in Darwin has tested positive for coronavirus in what is the first confirmed case in the Northern Territory.

NT Health confirmed the 52-year-old man as the first case of COVID-19 in the community on Wednesday evening.

The man recently arrived in Darwin via Sydney and has had limited contact with the local community, NT Health said in a statement.