Firefighter has Bluetooth implant to let doctors monitor her heart

Firefighter, 34, who suffers from blackouts gets a Bluetooth device implanted in chest allowing doctors to remotely monitor her heartbeat

A British firefighter has become one of the first people in Europe to be fitted with a Bluetooth device which will allow doctors to monitor her heartbeat from afar.

Sian Jones, 34, had the device fitted to her ticker during a ten minute operation this week at the University Hospital Southampton.

The new device will record her heart’s activity and then send it to a smartphone which can upload the data via the MyCareLink app. 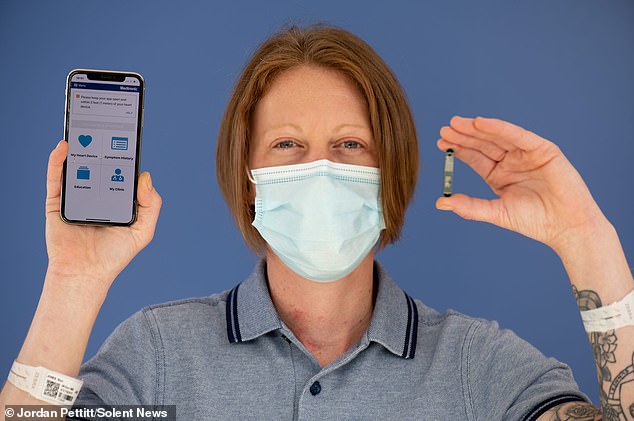 The device is no larger than a standard paper clip. It is designed to be used by people who need long-term monitoring due to issues such as blackouts or heart palpitations.

The firefighter broke her neck in a car crash when she was 18 and she has experience unexplained blackouts ever since.

Ms Jones, of Totton, near Southampton, told The Telegraph: ‘The crash was very serious. I was told I was millimetres away from being disabled or even dying from my injuries.

‘I was left with metal plates in the front and back of my neck and I’ve also had these often erratic episodes ever since.

‘I can sometimes go for months without it happening and then I will blackout numerous times. 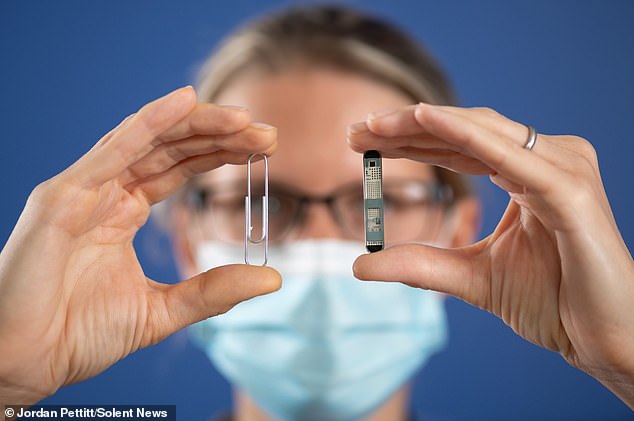 The Bluetooth implant is the same size as a standard paperclip 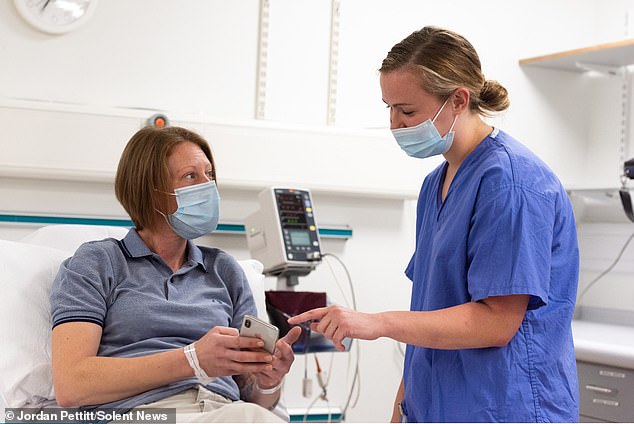 Sian Jones, 34, is shown by a nurse how to view the implant’s data on her mobile phone

‘Hopefully this will help find out what is causing it as I can’t risk it happening me to when we are on a fire call.

The implants are fitted with Bluetooth technology that allows them to communicate directly with the MyCareLink mobile phone app.

The MyCareLink mobile app lets patients stay in constant contact with a clinic.

The devices use wireless communication to transfer the data.

Data is encrypted to ensure patient’s details are passed securely.

‘I can feel the implant but not as much as I thought I would.’

Paul Roberts, a consultant cardiologist at the hospital, said the device meant that people with heart monitors would no longer need to go to hospital to have the data recorded.

He said: ‘We are one of the first in Europe to implant this pioneering device that will now allow us to see 24/7 what is happening.

‘It’s different to the Bluetooth that we have on our earphones and speakers. Bluesync technology is low-energy and a new and novel form which also has the rigorous high level cyber security measures in place.

‘Once it’s implanted we pair it up the same way you would pair up other devices, and all the patient needs to do is keep the app open in the background on their phone or tablet.’ 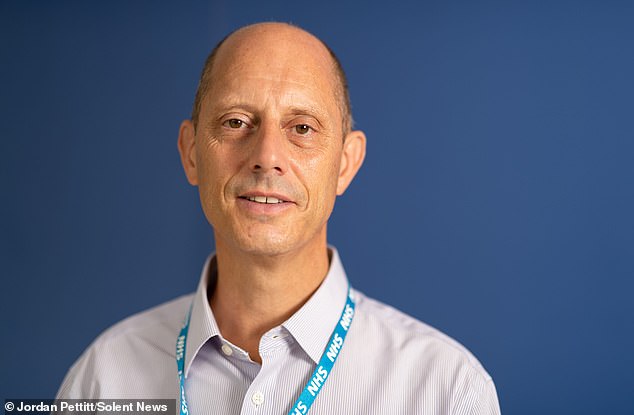 David Southworth, 73, from Colchester, became the first person in the world to be fitted with a Medtronic Cobalt implant that can monitor his heartbeat.

Since then several more people have been fitted with the device.

The Medtronic heart implant is not the first time humans have had microchips implanted into themselves – may times for none medical reasons:

Winter Marz, 31, an engineer, has her doorkeep implanted in her left hand in the form of a microchip.

In her right hand she also has a microchip implant that acts as a business card but which could also store medical information if needed.

She has a magnet in one finger which senses electro-magnetic fields and Winter plans to have two LED implants to illuminate her skin from the inside.

While in Sweden thousands of people have had implants fitted as an alternative to id cards.

While some people have chips fitted that can open and start their cars.