Lagos: Nigeria's biggest city Lagos and several states have been placed under curfew as unrest rooted in anti-police protests broke out again on Wednesday following a day of violence, including the shooting of civilians by security forces.

Armed police tried to enforce a round-the-clock curfew in the commercial capital, setting up checkpoints. But groups of young men blocked a number of major roads with overturned traffic signs, tree branches and rocks. Smoke billowed from buildings that were ablaze. 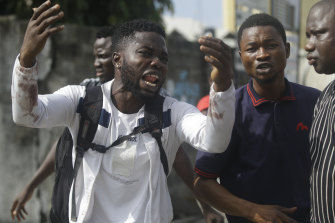 Alister, a protester, says his brother Emeka died from a stray bullet from the army in Lagos, Nigeria.Credit:AP

Video verified by Reuters showed armed police in the Yaba area of Lagos kicking a man as he lay on the ground. One officer fired into his back and dragged his limp body down the street. 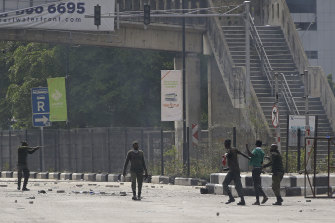 Police detain a protester at the Lekki toll gate in Lagos, Nigeria, on Wednesday.Credit:AP

At least 56 people have died across Nigeria since nationwide protests began on October 8, with about 38 killed on Tuesday alone, Amnesty said.

A Lagos police spokesman said via WhatsApp that he was "not aware of any such allegation" regarding the man who was kicked and shot, and said that there were no killings in Alausa, which he said was "a very peaceful place".

Thousands of Nigerians, many driven closer to poverty by the economic fallout from the coronavirus pandemic, have joined the protests that initially focused on a police unit long accused of extortion, harassment, torture and murder, the Special Anti-Robbery Squad (SARS) . 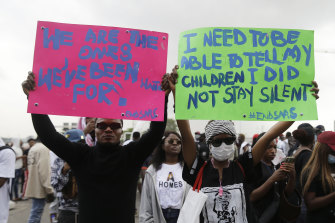 Protests have taken place in Nigeria’s capital, Abuja, as well as in the commercial hub of Lagos and in the south-eastern cities of Port Harcourt and Uyo.Credit:AP

The unit was disbanded on October 11 but the protests have persisted with calls for more law enforcement reforms.

Governor Babajide Sanwo-Olu imposed the curfew on Lagos on Tuesday.

But a shooting that night at a toll gate in the Lagos district of Lekki, where people had gathered in defiance of the curfew, appeared to mark the worst violence since the protests began and drew international concern over the situation in Africa's most populous country and a major oil producer.

"There is little doubt that this was a case of excessive use of force, resulting in unlawful killings with live ammunition, by Nigerian armed forces," United Nations High Commissioner for Human Rights Michelle Bachelet said.

And the Economic Community of West African States (ECOWAS) urged Nigerian security forces to exercise restraint in handling protests and to act professionally.

Sanwo-Olu said 30 people were hurt in the shooting. Four witnesses said soldiers had fired bullets and at least two people had been shot at the toll gate. Three witnesses said the gate's lights were turned off before the shooting began. One said he saw soldiers remove bodies.

The Nigerian Army said no soldiers were at the scene. 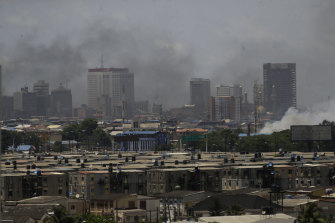 Smokes rise from government buildings set on fire by protesters in Lagos, Nigeria, on Wednesday.Credit:AP

Inyene Akpan, 26, a photographer, said more than 20 soldiers arrived and opened fire as they approached the protesters.

Witness Akinbosola Ogunsanya said the lights suddenly went out around in the evening and men came beforehand to take down CCTV cameras. Minutes later, soldiers in uniform walked towards the crowd, shooting as they walked, he said. He saw about 10 people being shot and soldiers removing bodies, he said.

Another witness, Chika Dibia, said soldiers hemmed in people as they shot at them.

Henry Kufre, a television producer, said the atmosphere had been peaceful and people were singing the national anthem before the site was plunged into darkness and the shooting began.

Buhari said on Wednesday he was committed to providing justice for victims of brutality, and that the police reforms demanded by the demonstrators were gathering pace. He did not refer to the shooting at the toll gate.

Vice-President Yemi Osinbajo late on Wednesday, Thursday (AEDT) on Twitter expressed sympathy for victims. "We can and will get justice for all of them," he tweeted.

Earlier, Sanwo-Olu said 25 people were being treated for injuries and two were in intensive care.

"I recognise the buck stops at my table and I will work with the FG [federal government] to get to the root of this unfortunate incident and stabilise all security operations to protect the lives of our residents," Sanwo-Olu said.

Unrest also gripped other parts of southern Nigeria. Among states imposing restrictions was the oil production hub of Rivers State, including a curfew in parts of oil city Port Harcourt.

In South Africa, hundreds of Nigerians carrying placards demanding "a new and better Nigeria" marched to the Nigerian High Commission in Pretoria. Protesters also rallied outside the Nigerian embassy in London.

Nigeria sovereign Eurobonds fell more than 2 cents on the dollar on Wednesday. One analyst said the protests might trigger a resumption of attacks on oil facilities, potentially hitting its main source of foreign earnings.

"The Niger Delta militants … have reportedly shown support for the [protest] movement. Should the protests escalate, we could see attacks resume on the oil and gas facilities," said Janet Ogunkoya, senior research analyst at Tellimer Research.