Hopes for a 20-second Covid-19 test that could save the airline industry have been hit back after the firm behind the it rowed back on their claim of a succesful initial trial.

British startup iAbra were said to have developed a saliva test that used machine learning to detect the virus in only 20 seconds.

Heathrow airport agreed to run a trial of the Virolens test with passengers over three weeks, which the company said had been ‘successful’ and would lead to clinical trials.

The share price of TT Electronics, who manufacture the device, shot up 40 per cent after performance data was released, valuing it at about £440 million. 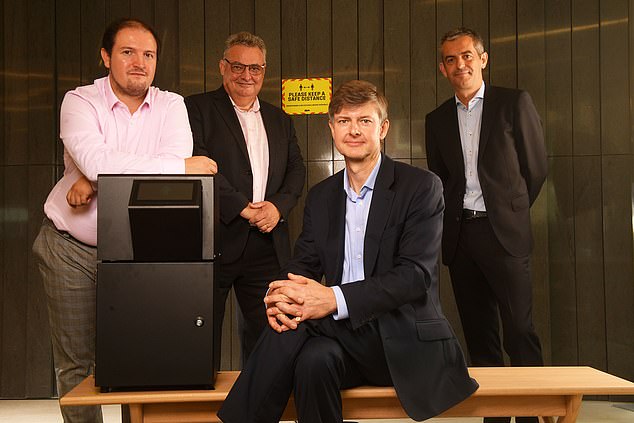 Hopes for a 20-second Covid-19 test that could save the airline industry have been hit back after the firm behind the it rowed back on their claim of a succesful initial trial. Pictured from left: Greg Compton, Shane Tingey, Justin Phillimore and Richard Tyson with their testing device

However, scientists at Bristol said they were not involved with designing the study and had only supplied Iabra with harmless inactivated samples of the coronavirus that causes Covid-19.

A spokesman for Iabra said the original statement had been released by mistake.

‘Virolens is a new application of AI technology that has been developed collaboratively over the past ten years,’ they told The Times.

‘It has the potential to make a significant difference to Covid testing, but it is currently embarking on functional and clinical trials and it wouldn’t be appropriate to comment further until the results of those are known. We are poised to roll out once we receive the requisite approval.’ 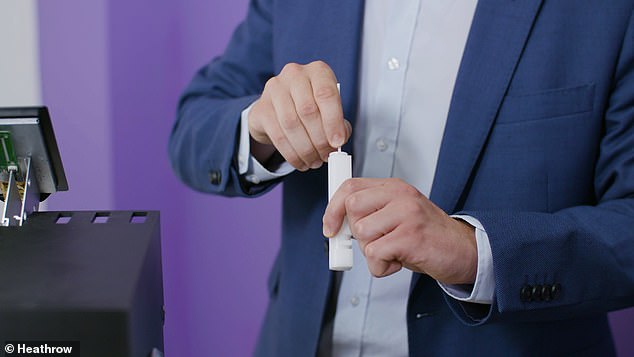 The new Virolens test, which is said to provide results in 20 seconds, was given a three-week trial at Heathrow Airport which the company said was ‘successful’

However, Bristol virologist David Matthews said it was still possible that the technology could work.

‘If it does, they’re going to be billionaires overnight but they have to hand over the device, leave the room and let it be tested,’ he said.

iAbra previously said that ‘the Virolens system has a 99.8 per cent sensitivity and 96.7 per cent specificity, based on the results of an internal in-vitro validation study, designed by the University of Bristol, demonstrating an exciting proof of concept’.

The test uses a sophisticated form of microscopy, analysed by AI, to detect virus particles in saliva samples. 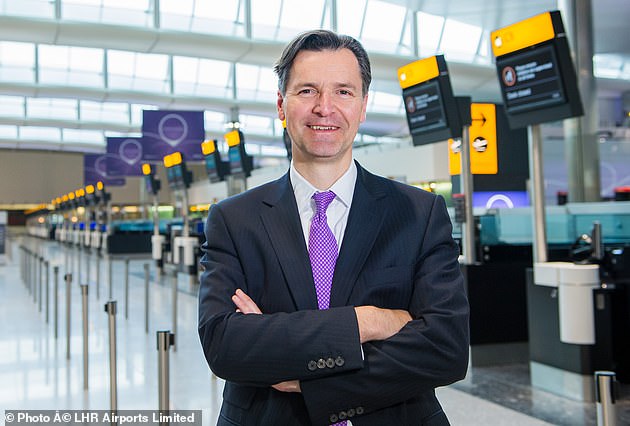 The development comes as a blow for Heathrow boss John Holland-Kaye, who had urged the Government to fast track the Covid-19 test to help the airline industry

The company, which has only four employees said the test does not need to be administered by healthcare professionals and is repeatable, with each screening device capable of carrying out hundreds of tests per day.

If successful, the Virolens test could replace the current gold standard polymerase chain reaction (PCR) tests that are conducted in labs use swabs and need to be processed at different temperatures, meaning it takes longer to get results.

The development comes as a blow for Heathrow CEO John Holland-Kaye, who said last week that iAbra’s technology was ‘potentially more accurate’ than standard tests used to detect the virus.

He had also encouraged the government to ‘fast-track this technology’.

A spokesman for Heathrow said: ‘Our research into testing solutions continues and Heathrow has not placed an order with Iabra for any further pilots at this stage.’

Greg Compton, 33, Iabra’s chief executive, told the Financial Times that any mistakes in the original press release had not been ‘done with any malice’.

It comes after Boris Johnson pledged to increase testing capacity to 500,000 tests a day by the end of October at the Downing Street press conference last week.

Outlining the ‘ambitious’ plans, he said: ‘We think, we hope, we believe that new types of tests which are simple, quick and scaleable will become available and they use swabs, or saliva, and can turn around, results in 90, or even 20 minutes.

‘Crucially, it should be possible to deploy these tests on a far bigger scale than any country has yet achieved, literally millions of tests, being processed every single day.’