An ‘X-rated’ home known as ‘Willy House’ because of its entrance framed by a series of ‘phallic’ topiary trees in the garden is on sale for almost £1million.

The property in the tranquil village of Cross, near Axbridge in Somerset, has been turning heads for more than 20 years with its phallus-shaped greenery.

Looming over the Mendip Hills in Bristol, in the village where Carry-On star Frankie Howerd lived for much of his life, the property is on the market priced at £925,000. 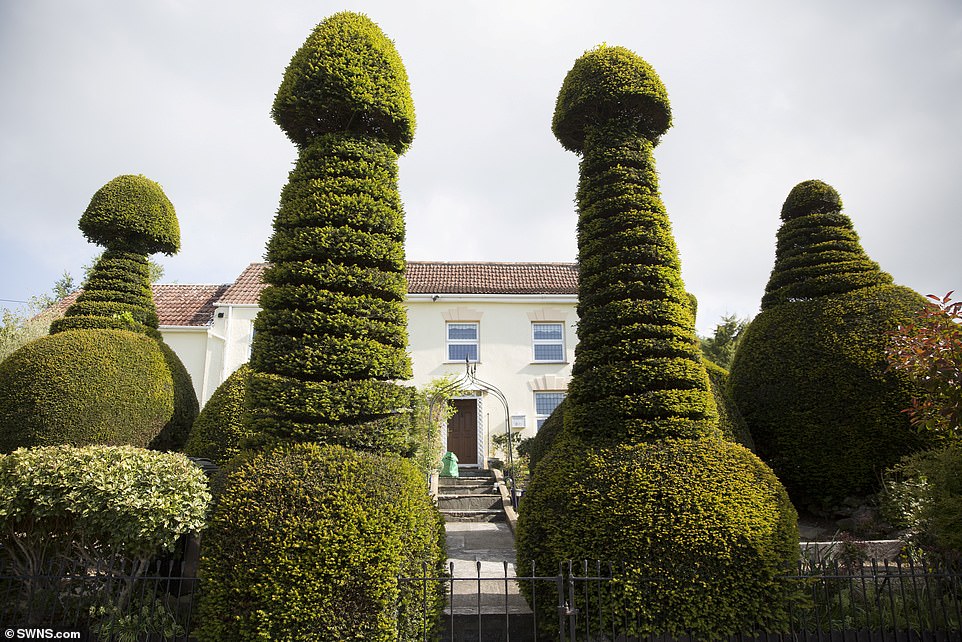 What an entrance: the 200-year-old topiary trees sit in the front garden of the five-bedroom property in Cross, near Axbridge in Somerset 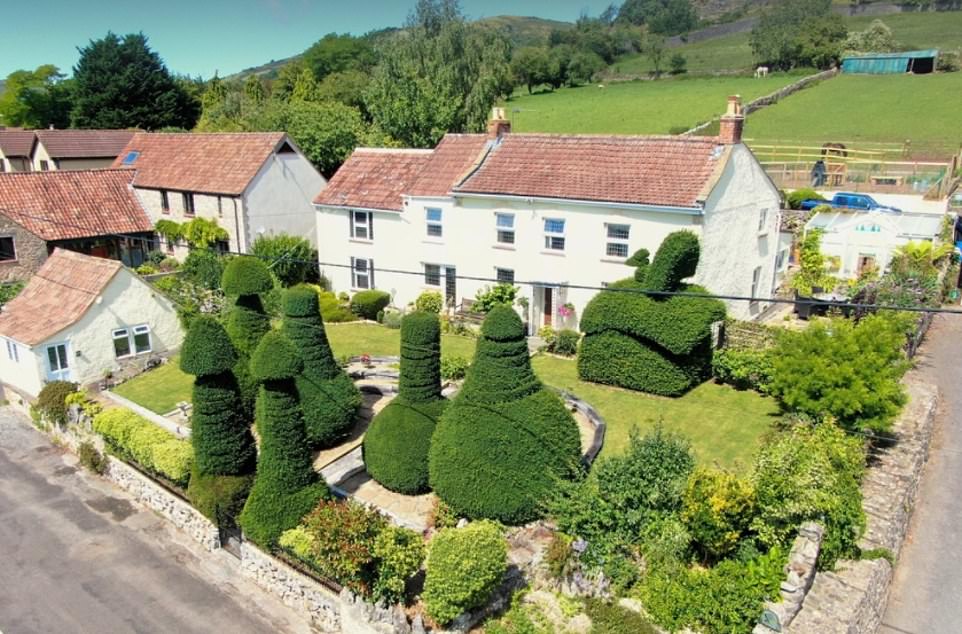 There are seven topiary trees in the front garden of the property, and schoolchildren in the local area have aptly named the home the ‘Willy House’ 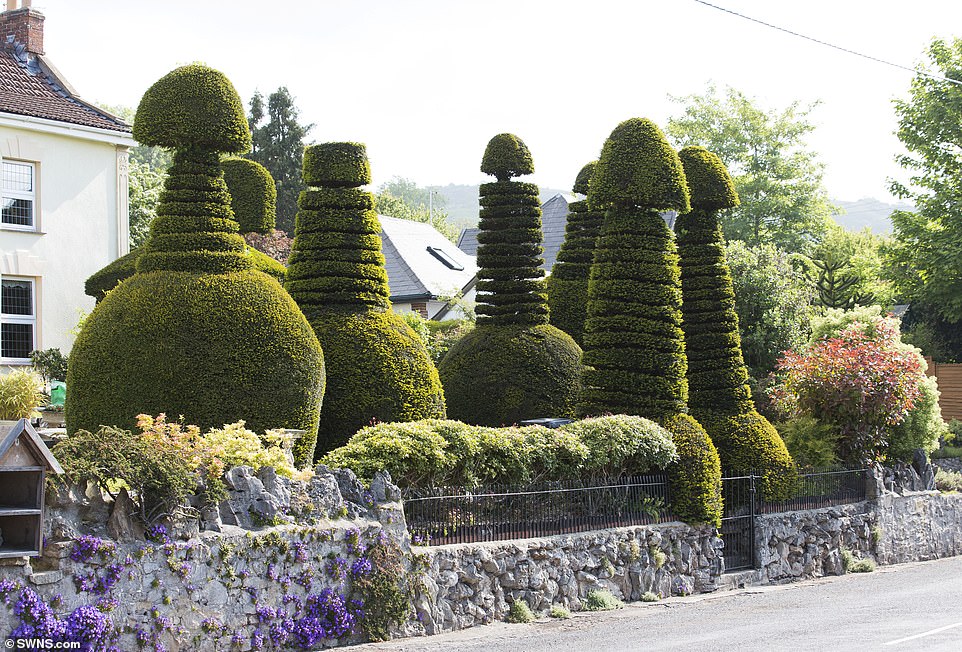 The comic legend and Carry On star who would tell audiences to ‘titter ye not’ bought another property in the village in 1969 and lived there with his partner and manager Dennis Heymer until his death in 1992 aged 75.

The 17th century home boasts four individual double bedrooms and a one-bedroom cottage in the front garden which offers possible income from Airbnb, or could provide home office or studio facilities.

The reception hall features a recessed fireplace and cast-iron stove, with a hidden disused staircase behind stripped pine doors. 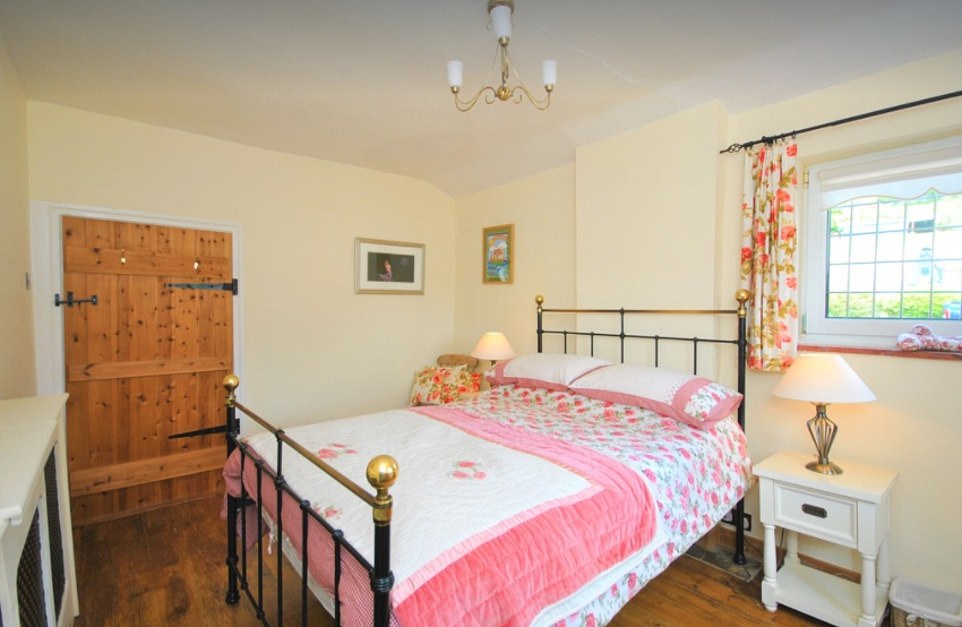 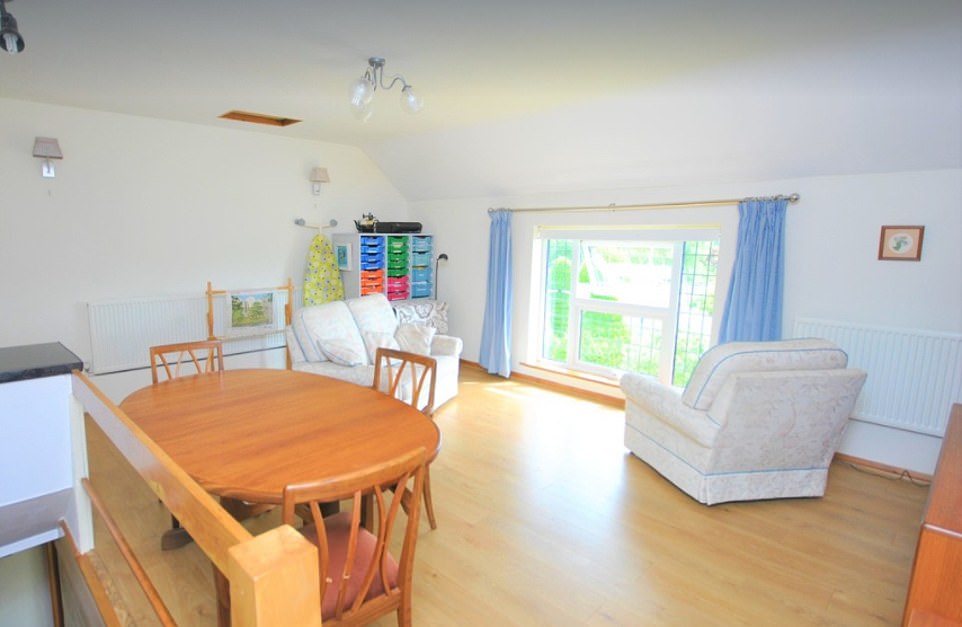 One of the house’s four ‘reception’ rooms (pictured above), which include a sitting room, reception hall and a dining room 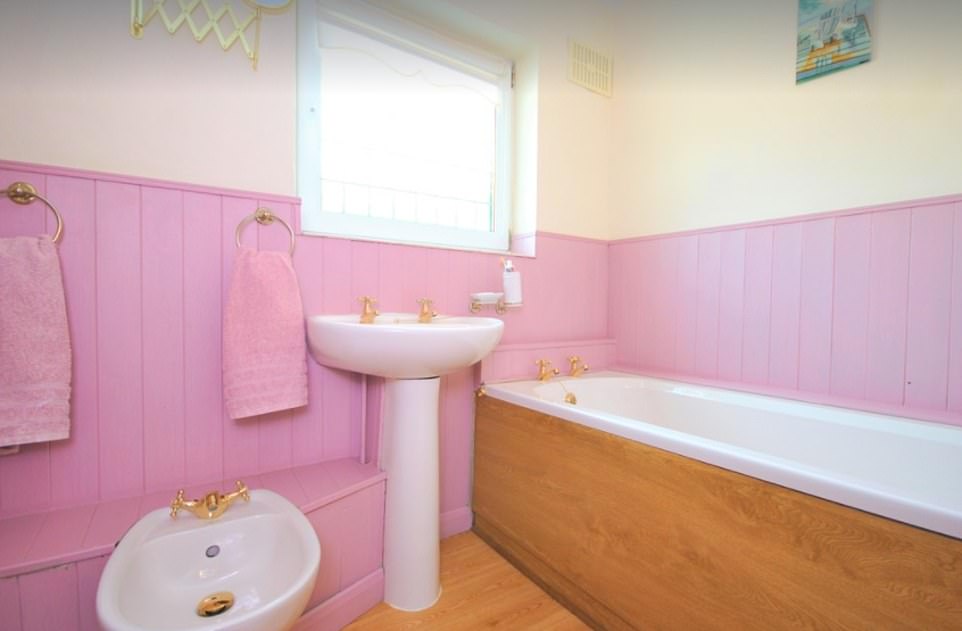 In the kitchen there is an Aga cooker with granite worksurfaces, which face out into the back garden and looks to the Mendip Hills.

Peter Knife, who owns the property spanning over 2 acres, has said he has no idea how the hedges were shaped – but he has had no complaints.

Speaking a few years ago, the grandfather-of-three commented: ‘I’ve lived at the house for 20 years with my wife and its always been known as the ‘willy house’ by children who go to a school nearby.

‘It doesn’t bother me in the slightest.

‘I’ve also had people walk past my house and ask me how I keep my hedges so well-maintained.

‘I wind them up and tell them I put Viagra in the roots.’

In a listing on their website, estate agents Cooper and Tanner called the house as ‘a unique landmark in this rural community’. 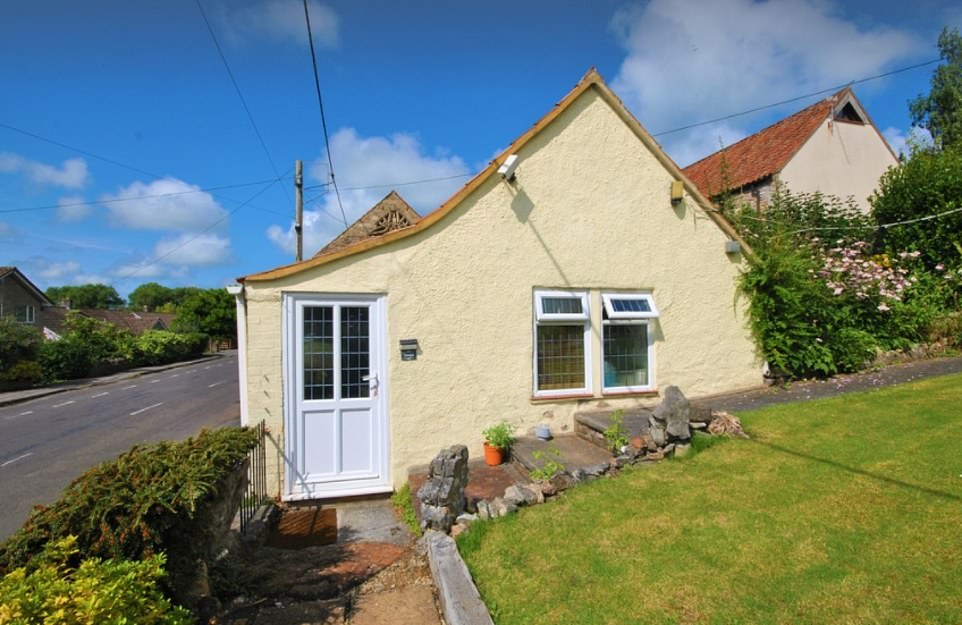 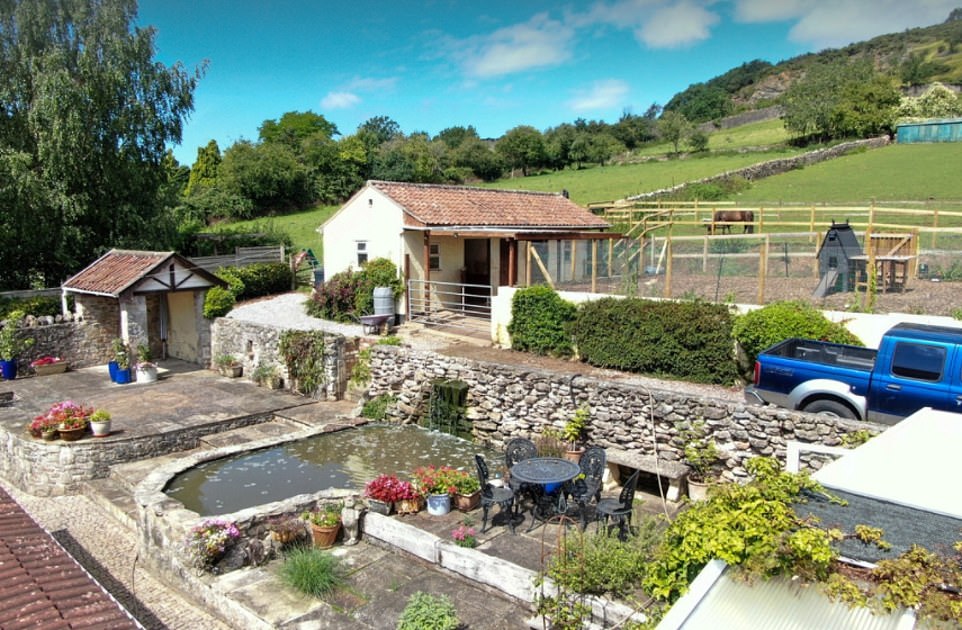 The back garden of the property (pictured), which spans over 2 acres, offers a stable block and tack room as well as adjoining paddocks and an area to keep chickens 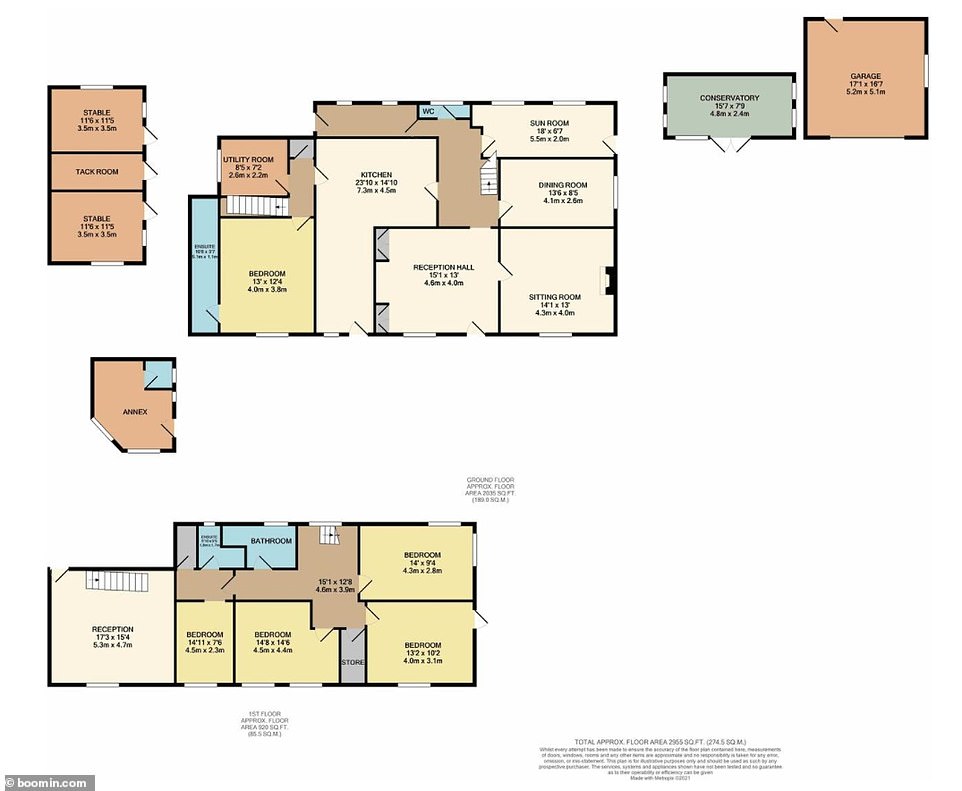 The floorplan for the 17th century property which boasts five bedrooms, conservatory, two stables and a tack room

They added: ‘The stunning 200-year-old topiary yew trees adorning the landscaped front garden, and the elegant pale-yellow façade, belies a welcoming interior with old ‘farmhouse’ warmth and charm, and a plethora of original features.

‘These impressive trees in the landscaped front garden are a unique landmark in this rural community.

‘They create a striking vision and frame the path to the front door. There are lawns either side with well-stocked flower beds and borders.