Five people have died after a tourist plane and a microlight aircraft collided mid-air in western France on Saturday afternoon.

The small microlight aircraft was carrying two people and collided with a DA40 tourist plane, which was carrying three people onboard.

The secretary general added that the microlight, or ULM plane, ‘landed on the fence around a house’ but nobody else on the ground was injured. 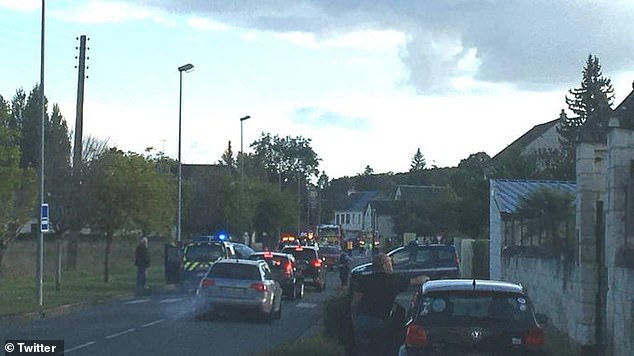 Five people have died after a tourist plane and a microlight aircraft collided at around 4:30pm local time in Loches, in the Indre-et-Loire department of western France

All five passengers onboard the two planes involved have died.

Seghier added: ‘(The microlight) landed on the fence around a house without harming anyone else, (the DA40) several hundred metres away in an uninhabited area.

The collision reportedly took place in the air on the Châteauroux side of the small city.

The tourist plane had taken off from Poitiers, situated around 100km from Loches, according to the Mirror.

But the flightpath of the microlight remains unknown at this time.

Around 50 firefighters were called out while 30 gendarmes, paramilitary police officers, set up road detours around the crash sites.

‘Air emergency staff from Lyon were brought in at first to track down the plane, which was quickly found,’ the prefecture said.

No details about the identities of the victims or the causes of the collision have been released so far.

Police in Loches have taken over the investigation into the crash.