A hut above the rest! Five-star rated Somerset beach cabin with lounge, en-suite bedroom and underfloor heating hits market for £160,000

A five-star rated beach hut – the only one to receive the prestigious rating in England – has been put up for sale with a starting bid of £160,000.

The boutique hut has won multiple awards and been fully booked for several years by visitors seeking a luxurious coastal retreat.

But its owners – who transformed the building after buying it in 2015 – have now put it up for sale.

Brett Bates said they were looking for ‘at least £160k’ and there had already been a lot of interest for the hut in Dunster, Somerset.

There is also a lounge with dining area, front and back fenced gardens with seating, sun loungers and bike racks. 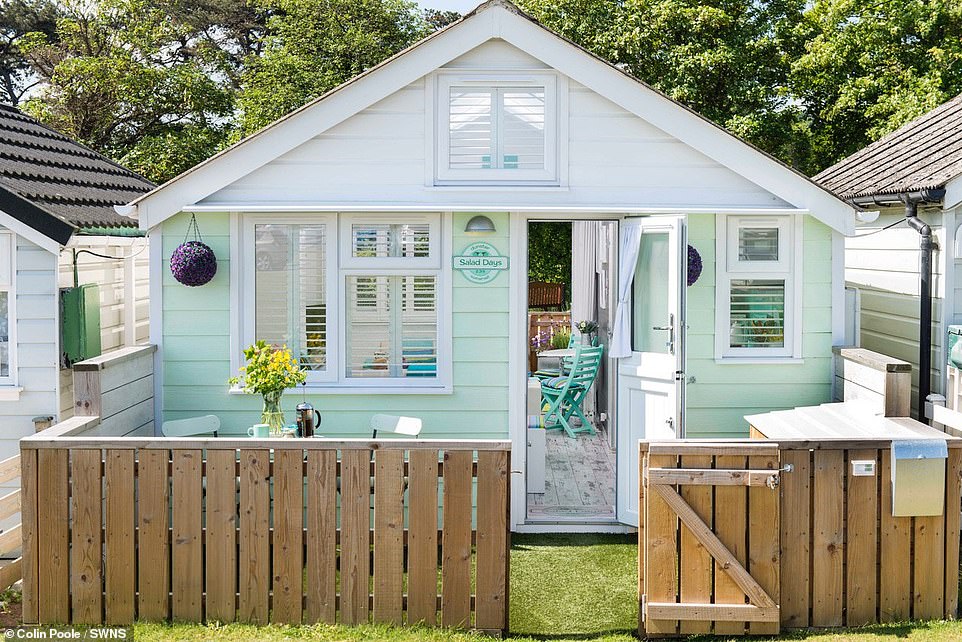 This luxurious five-star beach hut at Dunster beach in Somerset has been put on the market with a starting price of £160,000 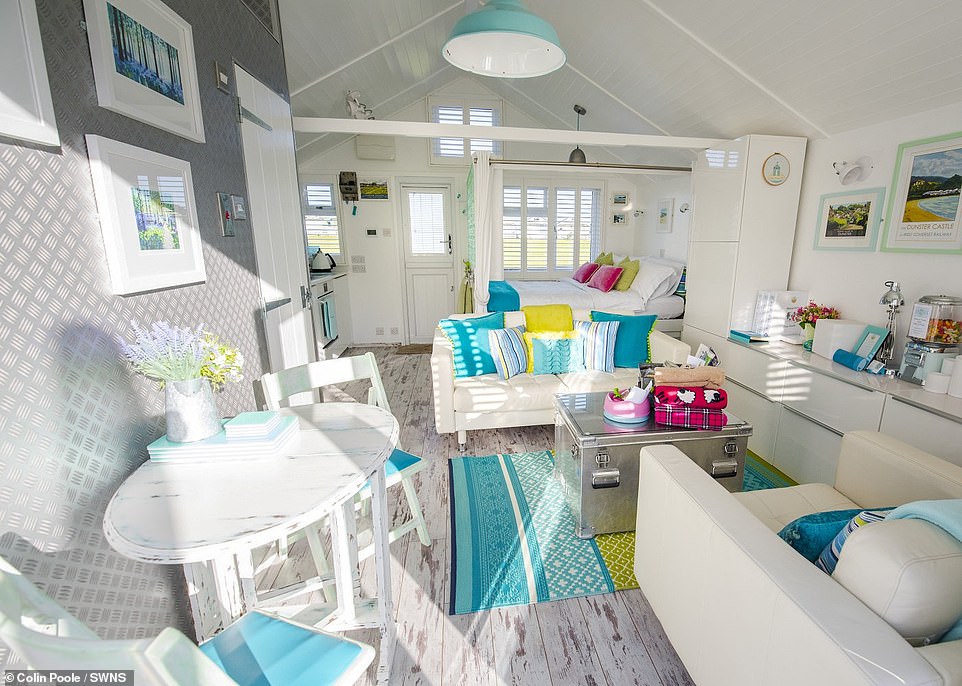 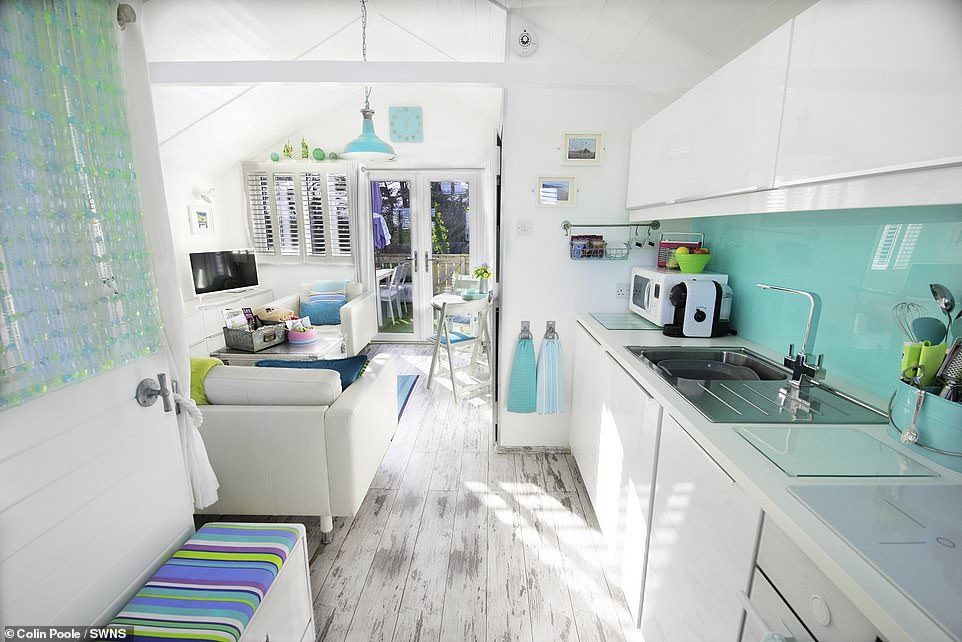 There is also a lounge with dining area, front and back fenced gardens with seating, sun loungers and bike racks

Brett said the hut has been one of England’s best kept secrets bordering Exmoor National Park and the Somerset coast, offering ‘unique luxury in a beach hut environment.’

He added: ‘We are looking for a price in excess of £160,000 and even after just a couple of hours we have had a lot of interest.

‘It’s been quite a journey we’ve had.

‘It’s has been so much fun having guests either rediscovering or finding Dunster Beach for the first time, but it’s time for us to move on to a new project now.

‘Someone has the opportunity to buy into a ready-made beach hut at Dunster. 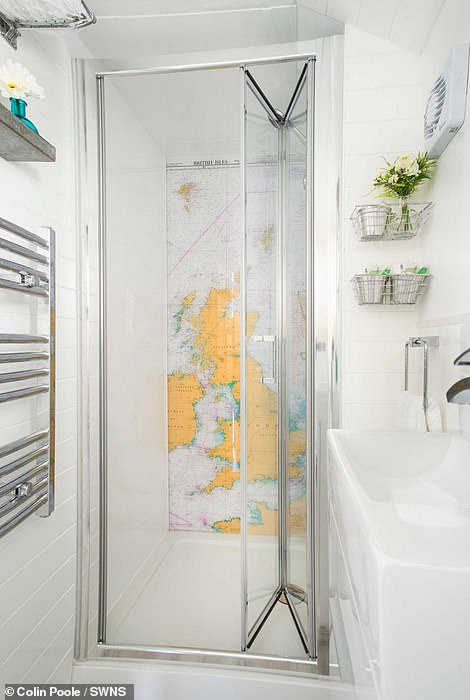 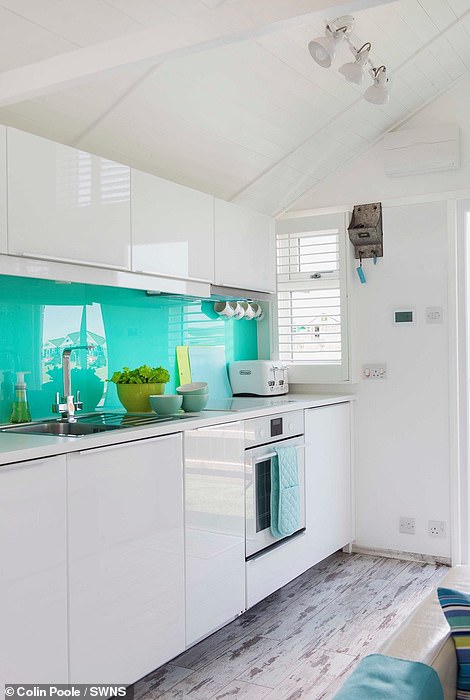 The hut – known as Salad Days – has been fully booked for the last few years, with this year sold out several months ago 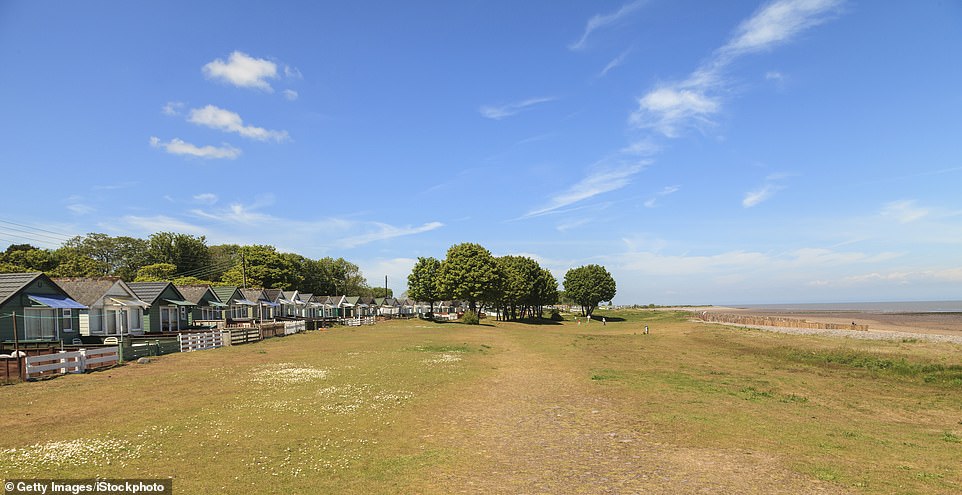 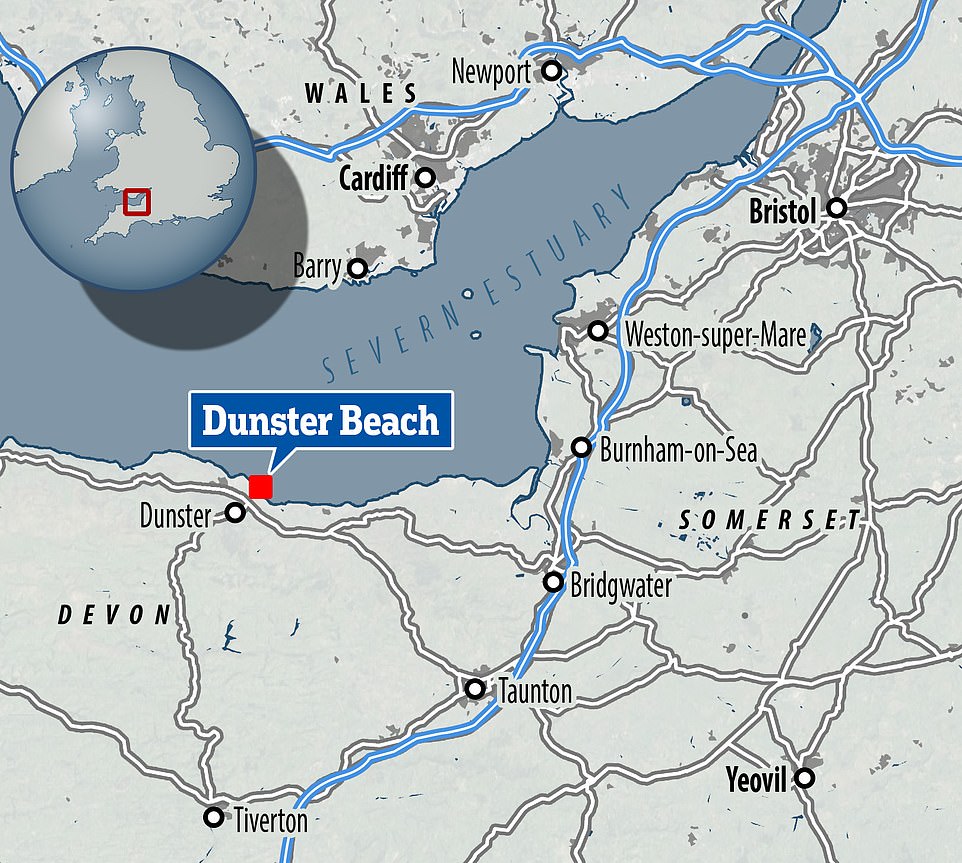 ‘It has a fantastic reputation and has been featured in many publications over the last few years and even described as the best beach hut in the world by one.’

The hut – known as Salad Days – has been fully booked for the last few years, with this year sold out several months ago.

The new owners will either be able to continue the self-catering business or just have their own escape by the beach ready to move straight into.

Current bookings for 2021 will not be affected as the new ownership won’t be until the end of the season in November.

Brett said an open day was planned in July when Covid safe viewings can take place.

Last week, a wooden cabin dubbed Britain’s ‘most expensive beach hut’ went on the market for £400,000 with its sellers saying it offers the ‘best views in Cornwall’ and also comes complete with kitchen, living room and bedroom. 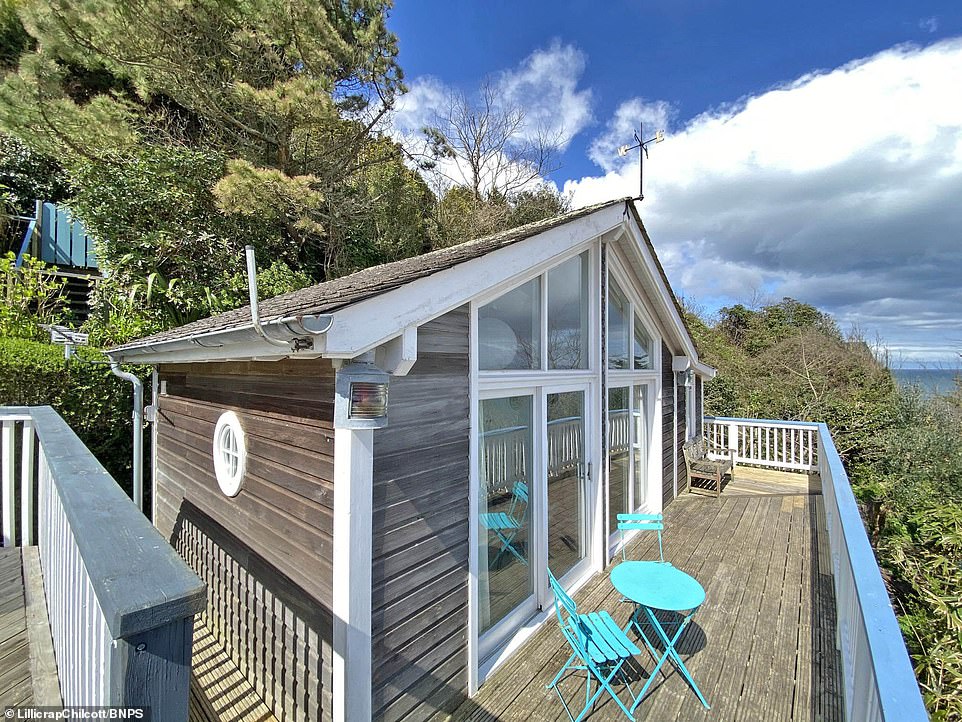 Last week, this wooden cabin with stunning views of the Cornish coast went on the market for a price of £400,000 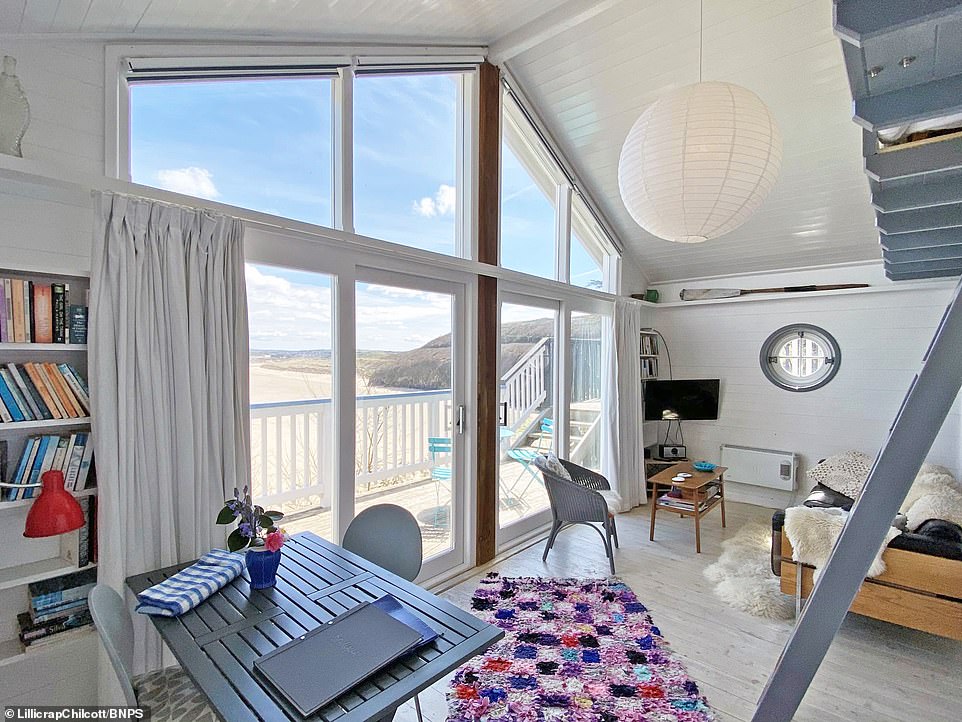 Inside is an open-plan living room, kitchen and bedroom, with space for a king-size bed above within its vaulted ceiling 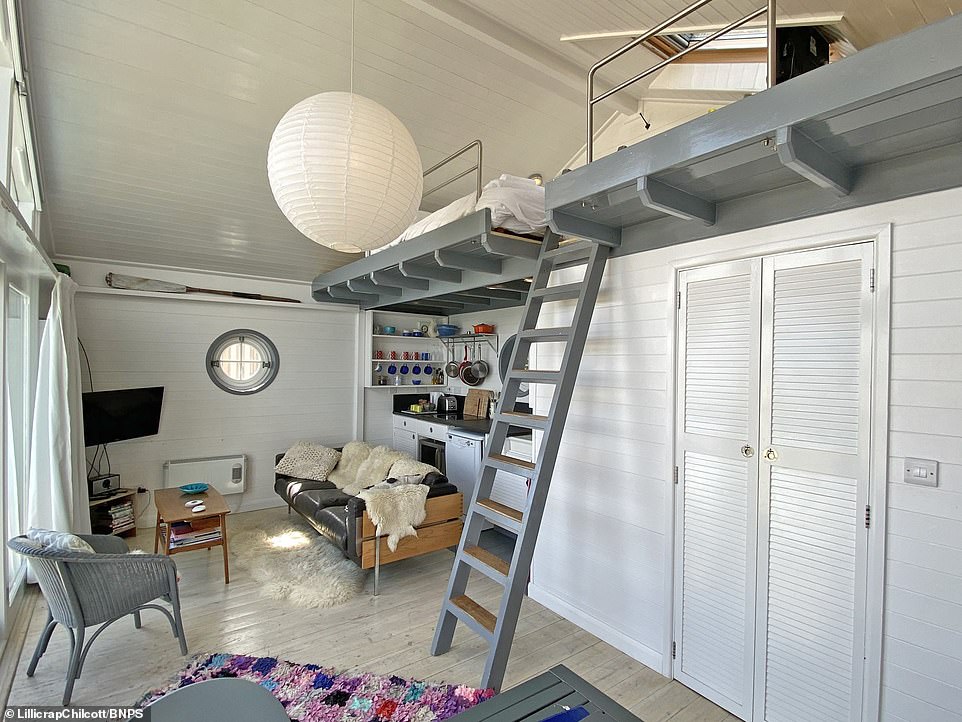 Cabin has a reception room with a kitchen area and living/dining room, a mezzanine with a king-size bed and a shower room 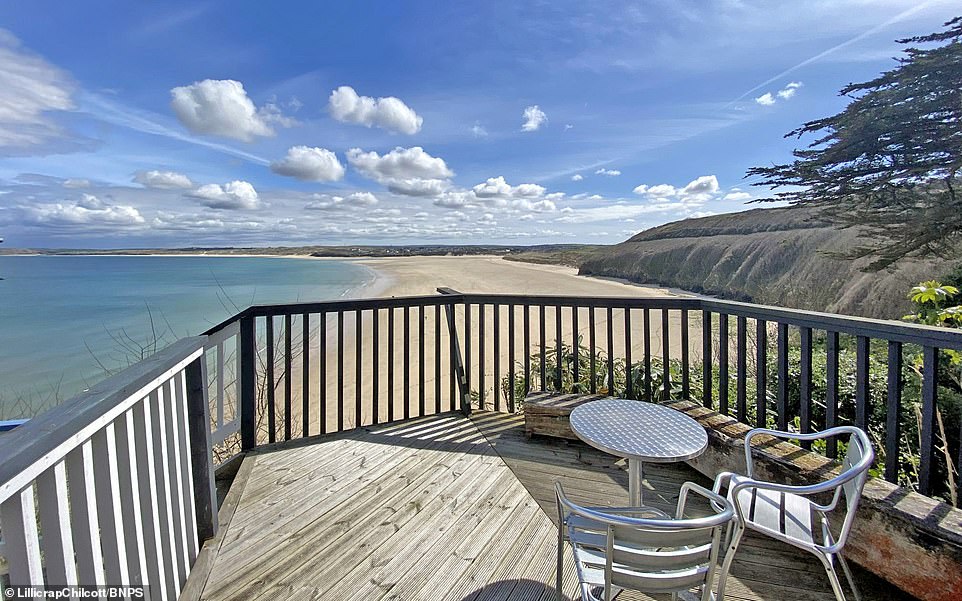 The Cabin is nestled among the trees above Porthkidney Sands beach in Carbis Bay and looks out across the sand and waves of St Ives Bay all the way to Godrevy Lighthouse.

The quirky property can only be reached by foot on the South West Coast Path, making it a really secluded coastal retreat.

It is the perfect spot to watch wildlife like seals and dolphins as well as boats and surfers and the new owners could be on the beach in minutes.

Because of its timber construction, the property is only open to cash buyers and can only be used as a holiday home, not a main residence.

Earlier this year, a wooden cabin on the exclusive Mudeford Spit in Christchurch, Dorset, which looks inland went on sale for £325,000. 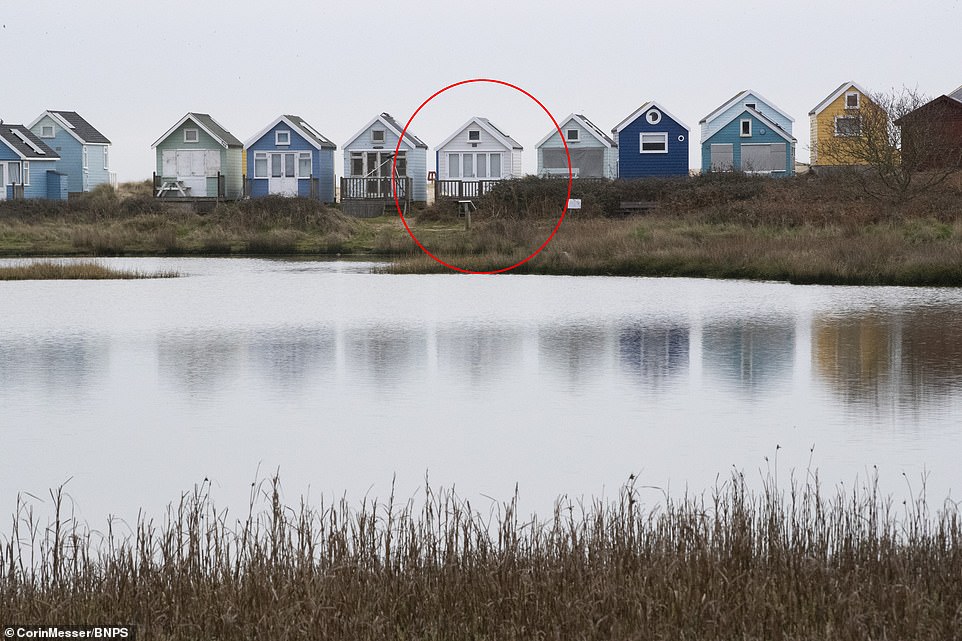 A wooden cabin on the exclusive Mudeford Spit in Christchurch, Dorset, which looks inland went on sale for £325,000 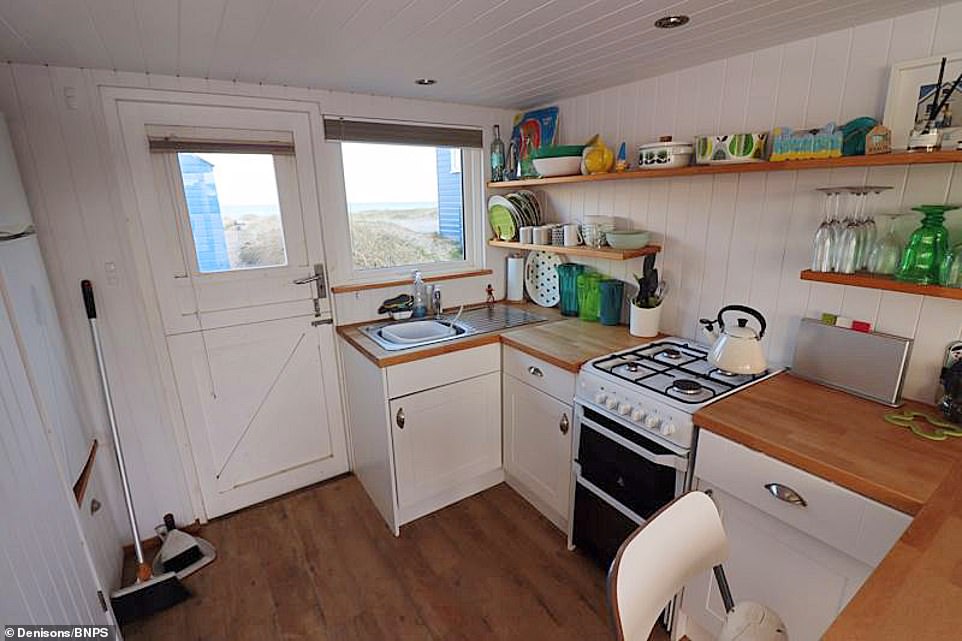 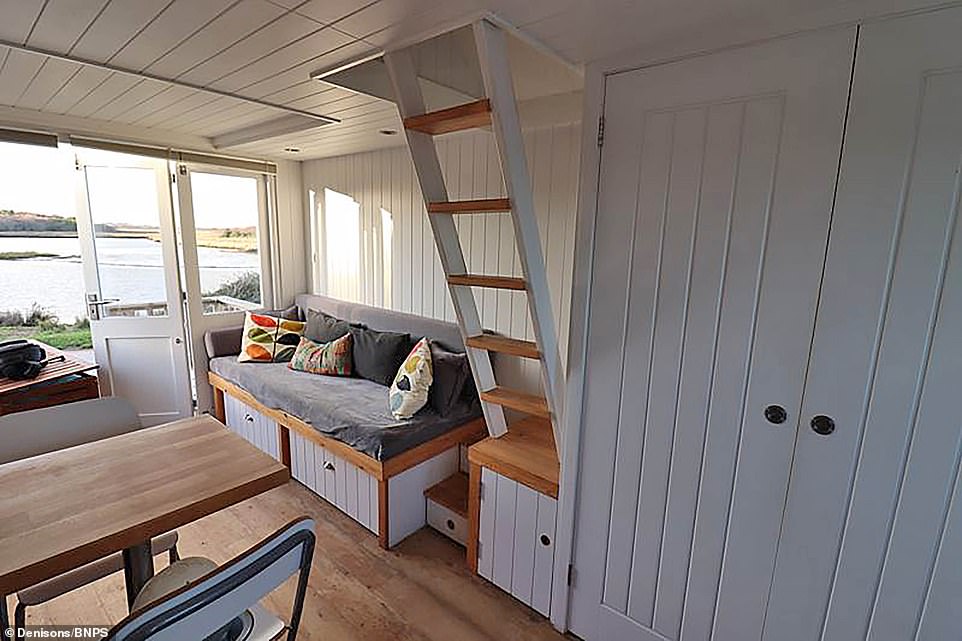 The view from the front, which looks towards the estuary. The building is situated on the exclusive Mudeford Spit in Dorset 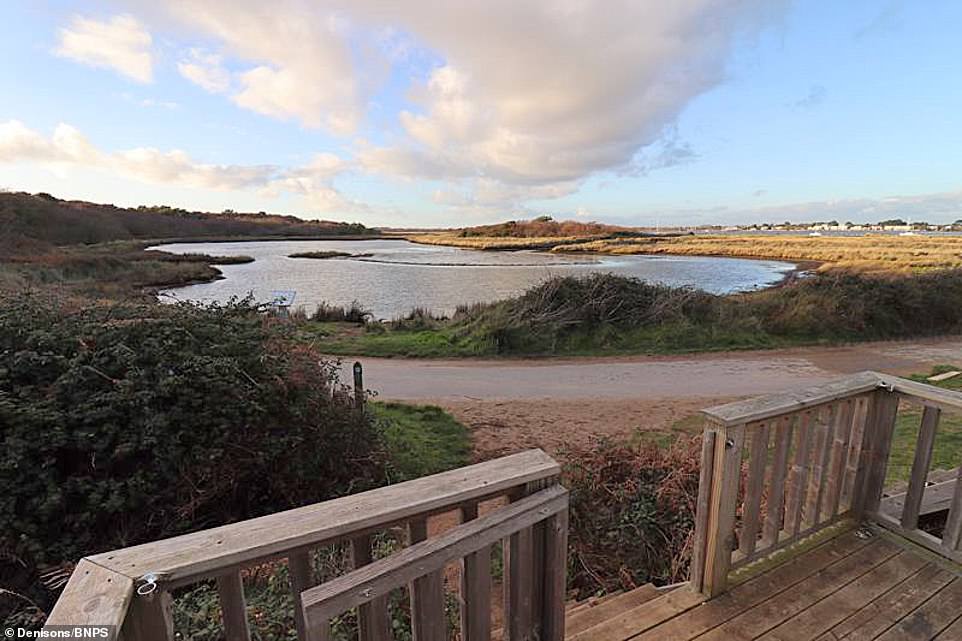 The view of the lagoon from the front of the hut, which includes a large wooden terrace for alfresco dining and drinks

The modern hut can sleep seven people, with three beds downstairs on converted seating and four in the loft space.

The site has been fitted out with a modern kitchen that includes a fridge and running water via an electric pump both powered by solar panels on the roof. There is also an oven connected to a gas bottle.

But it has no toilet or washing facilities. Instead the new owners will have to share a communal shower block.

The Mudeford sandbank is home to the most expensive beach huts in Britain.

Buyers are attracted by its incredibly remote location from which cars are banned. To get there requires a 30 minute walk, a ride on a novelty land train or a short ferry trip across Christchurch Harbour.

Its sandy beach looks out over Christchurch Bay and to The Needles on the Isle off Wight.