‘Fix the breach’: Harris on a clean-up mission with Poland after US rejects fighter jet plan for Ukraine

A day after the United States declined Poland's surprise proposal to provide Soviet-built MiG-29 fighter jets to the U.S. to give to Ukraine, Harris met with the country’s top leaders in Warsaw, where part of her job was to smooth over the controversy.

A major aim of the trip is to show unity among NATO allies in response to Russia's war on Ukraine, where the death toll has been rising. On Wednesday, a Russian airstrike devastated a maternity hospital in the southern Ukrainian city of Mariupol, burying women and children under debris and injuring more than a dozen.

At a news conference with Polish President Andrzej Duda Thursday, Harris expressed outrage at the airstrike, saying it was an example "atrocities of unimaginable proportions" committed by Russia. 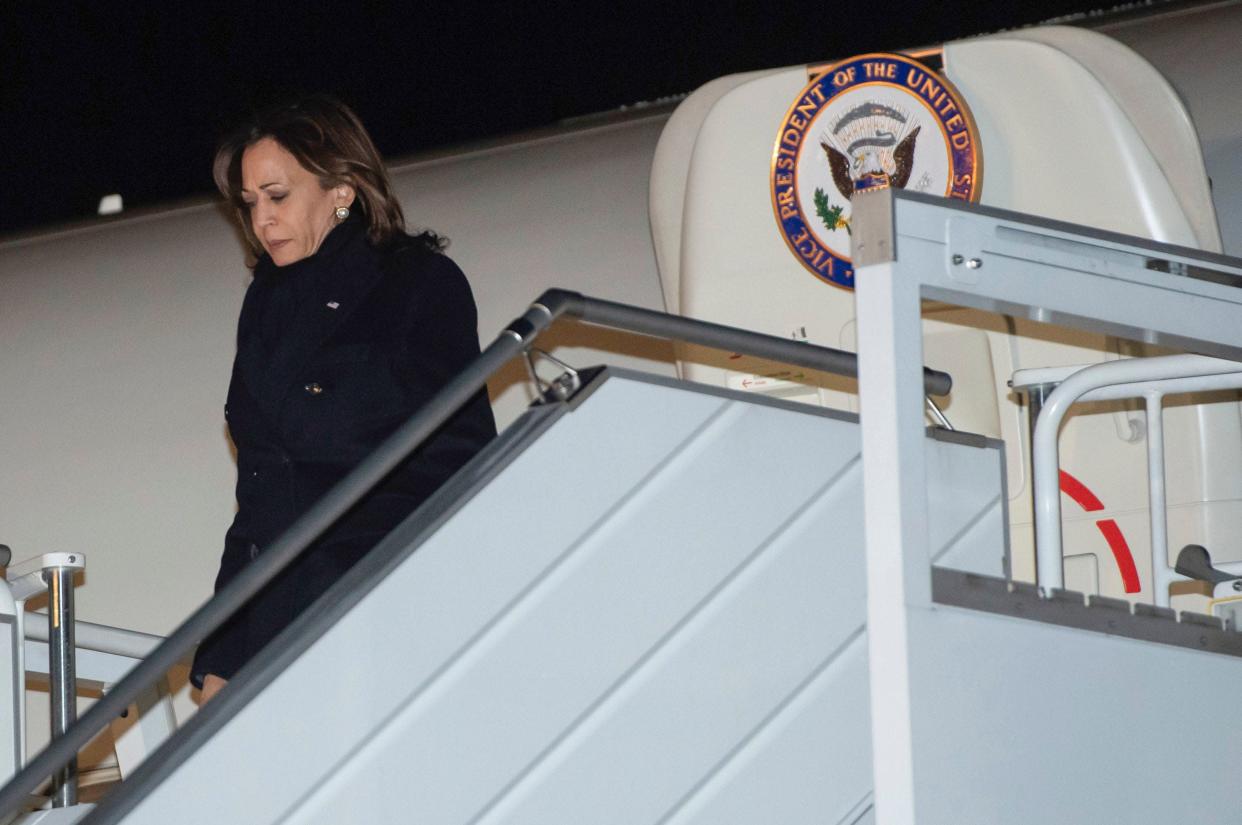 Harris arrived in Warsaw Wednesday, hours after Defense Secretary Lloyd Austin told Polish leaders that the United States does not support the transfer of additional fighter aircraft to the Ukrainian Air Force, according to Pentagon Press Secretary John Kirby.

"We believe the best way to support Ukrainian defense is by providing them the weapons and the systems that they need most to defeat Russian aggression, in particular, anti-armor and air defense," Kirby said.

Here's what's on the vice president's agenda and the challenges she is facing.

Where is Harris going and what is she doing?

Harris will meet with Ukrainians who have fled to Poland and talk to service members in the U.S. and Polish militaries.

On Friday, Harris will travel to Romania, another state that borders Ukraine, where she will meet with Romanian President Klaus Iohannis. 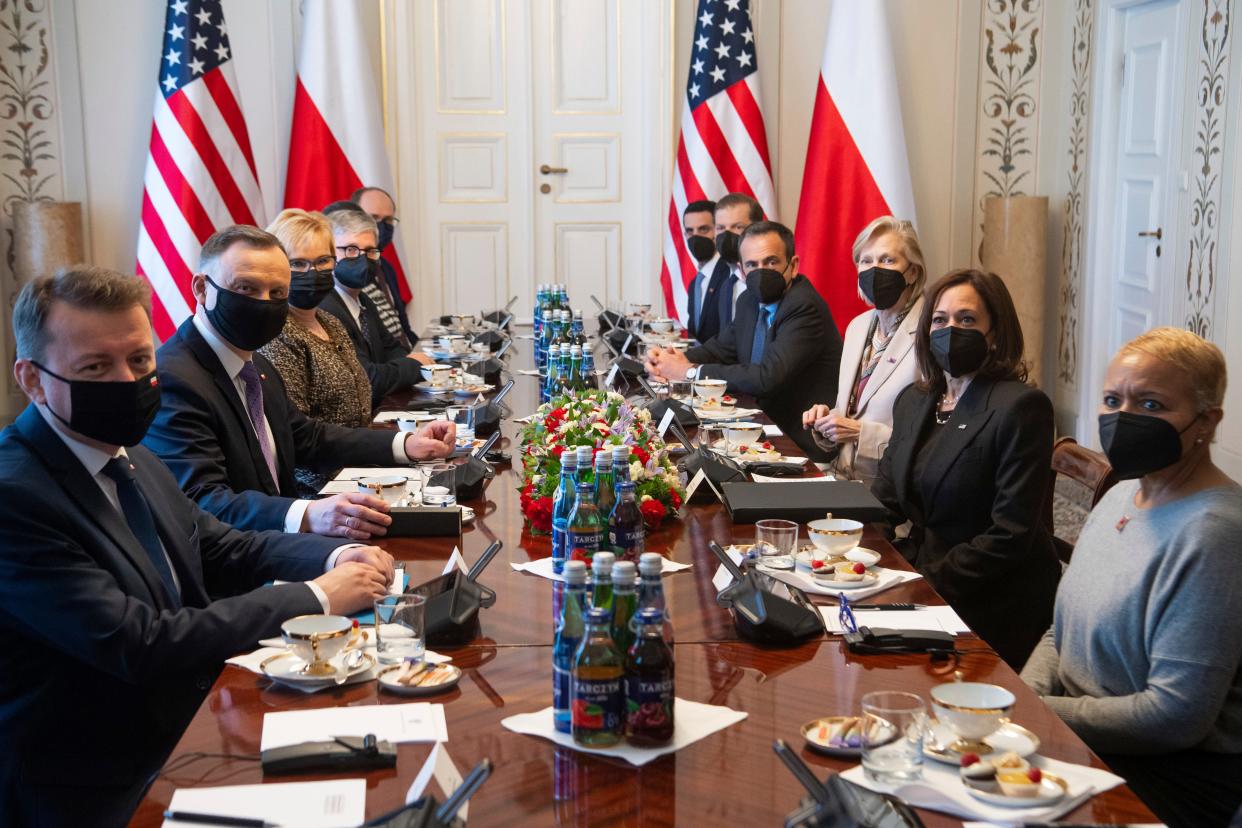 Why is she going?

Harris wants to show that the United States is firmly united with its NATO allies in support of Ukraine.

At the news conference with Duda, she described the relationship between the U.S. and Poland as deep and enduring and said the bond has only grown stronger as a result of the Ukraine crisis.

She will confer with allies on what more can be done to put pressure on Russian President Vladimir Putin. But the senior administration officials who briefed reporters about the trip on condition of anonymity declined to say what that might include. Instead, an official called it a “very fluid, very dynamic situation” that requires ongoing assessments and responses.

Stephen Mull, who was U.S. ambassador to Poland when then-Vice President Joe Biden visited Warsaw shortly after Russian troops took control of Ukraine’s Crimean region in 2014, said the main focus is likely to assure Poland that the U.S. has its back.

“I really think this is mostly your show the flag, show the strength of the Alliance relationship,” he said. “It may not sound like much, but in times like this, when the house is on fire in Eastern Europe, it means a lot.”

Experts said other topics would likely include the humanitarian relief package for refugees that is moving through Congress, possible U.S. help in the event of a disaster at one of Ukraine’s nuclear power facilities and how the U.S. and Poland can repair what the White House called a "temporary breakdown in communication" over the fighter plane issue.

“You need the vice president to get engaged, to listen to the governments, find out what they need. And in the case of Poland now, she's got some real work to do to basically get us out of this MiG-29 mess,” said Daniel Fried, former ambassador to Poland under the Clinton administration. “There's no reason that this should linger, and now she can work on it and help fix it.”

Fried said Harris will also likely focus on long-term Russia policy and humanitarian aid for the more than 2.1 million Ukrainians who have fled their home country. More than half of those refugees have made their way to Poland, according to the United Nations High Commissioner for Refugees.

What happened before Harris left?

The Polish government surprised the U.S. by offering to send its MiG-29 fighter planes to a U.S. air base in Germany for the U.S. to then give the planes to Ukraine.

"To my knowledge, it wasn't pre-consulted with us that they planned to give these planes to us," Victoria Nuland, the State Department’s under secretary for political affairs, told a Senate committee on Tuesday.

On Tuesday evening, the Pentagon issued a statement saying the prospect of fighter jets controlled by the United States flying from a U.S.-NATO base into airspace that is contested with Russia over Ukraine "raises serious concerns for the entire NATO alliance."

"We will continue to consult with Poland and our other NATO allies about this issue, and the difficult logistical challenges it presents," Kirby said in a statement, "but we do not believe Poland’s proposal is a tenable one.”

How did Poland’s surprise announcement make her trip more challenging?

The way events played out in public was “very embarrassing” for the U.S., said Robert McConnell, co-founder of the U.S.-Ukraine Foundation.

While the Biden administration has done a “remarkable job” of keeping their coalition united, “this is a major breach in that,” he said.

“If she can fix the breach between Poland and the United States, that'd be very helpful,” McConnell said. “There are probably a lot of facts, of which I'm not aware, that can be talked about behind closed doors and people say, 'Kumbaya,’ and `Let's move forward.’”

What's Poland's position now and has it changed?

Poland’s prime minister, in a speech in Vienna Wednesday, reiterated Warsaw’s willingness to provide warplanes to Ukraine but said it would only do so if the U.S. or its allies “backfill” its military with F-16 fighter jets – and if NATO as a whole agrees to such a transfer.

“Generally, the main message is that we just want this decision about the aircraft to be taken by all member states of NATO, and not unilaterally by Poland,” a Polish diplomat told USA TODAY. “We believe that this is the best way to deal with this. This is the current state of play.”

The Polish official said he could not provide anything further given the sensitivity and fluidity of the situation. But the official said Poland’s offer still stands, which is “giving free of charge all of these planes to the Ramstein (U.S. military) base, or any other place, any other military base in Germany, and then as they are already in a position of United States, then being delivered to Ukraine.”

Were logistical issues the only sticking point?

No, according to some former U.S. officials and other observers.

“What the Poles want is top cover from the U.S. They don't want to be exposed,” said former U.S. ambassador to NATO Kurt Volker, who also served as the U.S. special representative for Ukraine until his resignation in September 2019.

“The way Tony Blinken phrased this this morning was, well, every nation can make its own decisions. Okay, but if you're Poland, and you're right up there against the Russian border, and you feel you're going to be giving up your aircraft, don’t you feel a little bit vulnerable?” Volker told USA TODAY Wednesday. “And can't we be doing something to give them backfill for that and give them political assurance and cover that, hey, you know, you're not going to be targeted?”

“That gap, that seems to be an easy gap to fill, but we don't seem to be willing to do it,” Volker said.

Does Russia have a Red Line the Biden administration won't cross?

Volker said he believed that the lack of support for providing Ukraine with planes directly is due to the administration "imagining that there is some Putin-drawn line that, if we cross it, then somehow Putin now is at war with us. And so they don't want to cross whatever that imaginary line is."

"And they must think that these planes cross it," Volker said. "Meanwhile, Putin has said he's already at war with us because of the sanctions.”

McConnell likewise dismissed concerns about not wanting to risk an escalation.

Putin, McConnell said, is “going to escalate until we have to defend ourselves in NATO countries.”