The Republican governor's order unleashed fresh debate in the politically divided state, where pandemic responses have become intertwined with the upcoming presidential election. 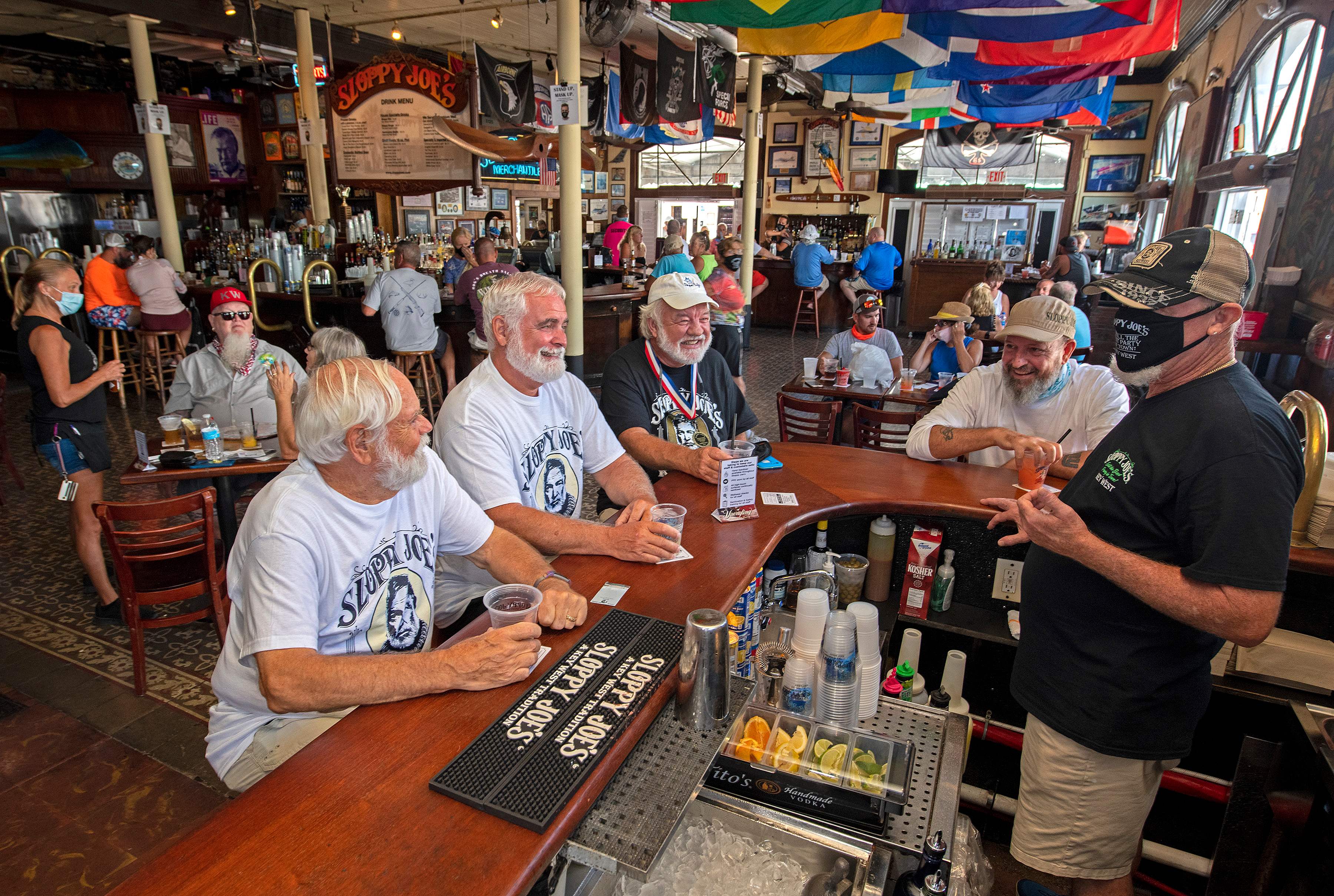 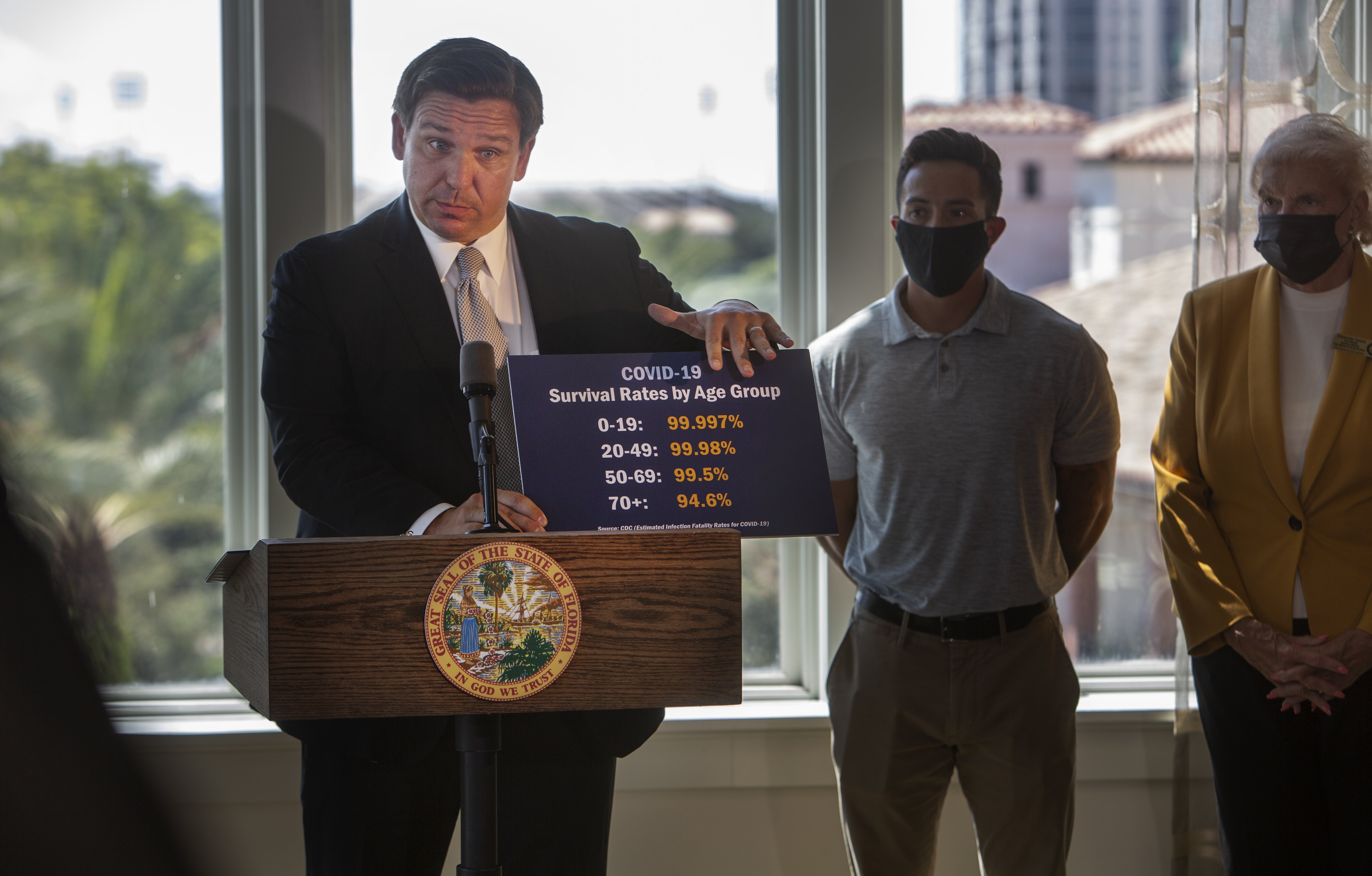 DeSantis, a major ally of Donald Trump, acknowledged that the pandemic is far from over, but he said the threat has eased and the time has come to reopen for business after six months of "people twisting in the wind."

The governor's announcement allows restaurants across the state to immediately reopen at full capacity — and prevents cities and counties from ordering them to close or operate at less than half-capacity unless they can justify a closure for economic or health reasons.

"We're not closing anything going forward," DeSantis said, while insisting that the state is prepared if infections increase again.

The governor, however, allowed local governments to limit bars to 50 percent capacity but added that he was "not going to stand in the way" of allowing them to fully reopen.

As part of his reopening plan, the governor barred cities and counties from collecting fines on people who violate social distancing rules or don't wear face masks. The governor's order virtually nullifies local ordinances put in place to limit the spread of the coronavirus. 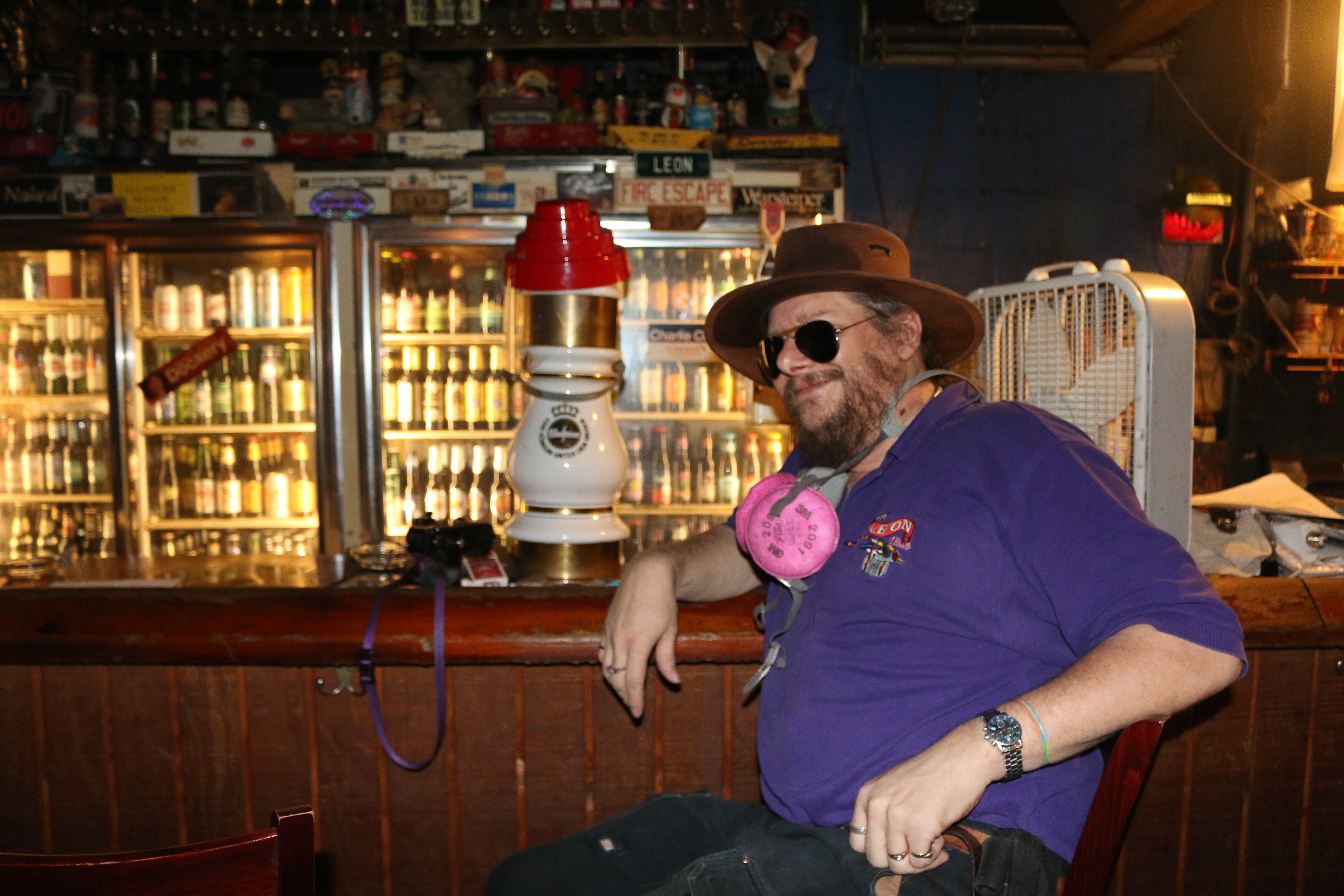 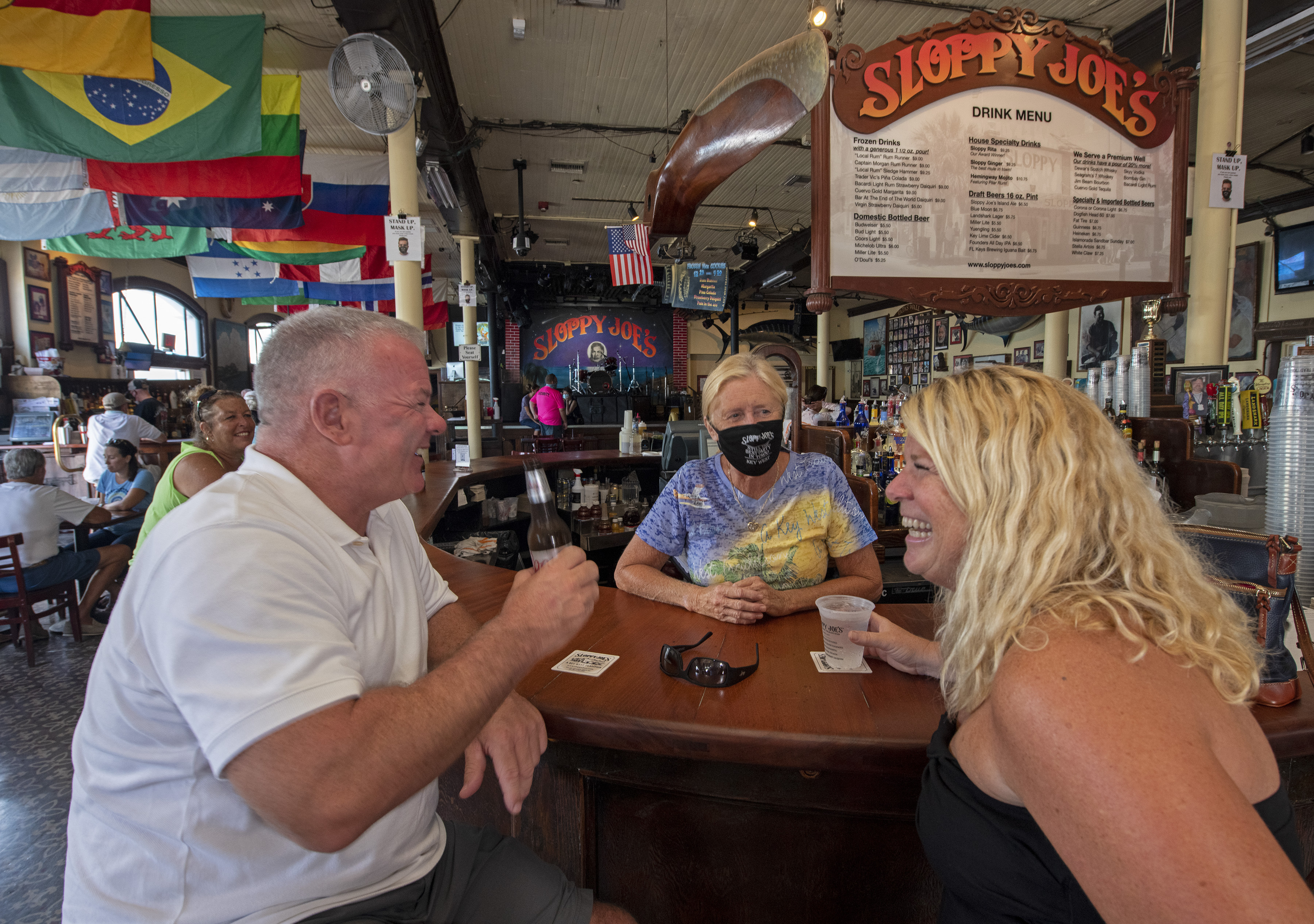 "I think we need to get away from trying to penalize people for not social distancing and work with people constructively," DeSantis said.

Florida Democrats have bemoaned the governor's push to reopen as hasty.

"No one is advocating for a full-scale lockdown in Florida. But we have been and continue to ask for common sense prevention measures such as face masks, which are essential to preventing further spread," state Senator Audrey Gibson said Thursday.

Some local officials appealed to the governor for continued authority to control the outbreak.

"We're hoping that the governor will allow us to have deeper restrictions than the rest of the state. We have a greater spread of the virus in South Florida than other parts of the state," Broward County Mayor Dale Holness told WLRN, a public radio station in Miami.

Miami-Dade County Mayor Carlos Gimenez said in a statement Friday that DeSantis' order allows him to continue restricting restaurants to half their capacity. But he acknowledged the county will no longer fine people for not wearing masks. 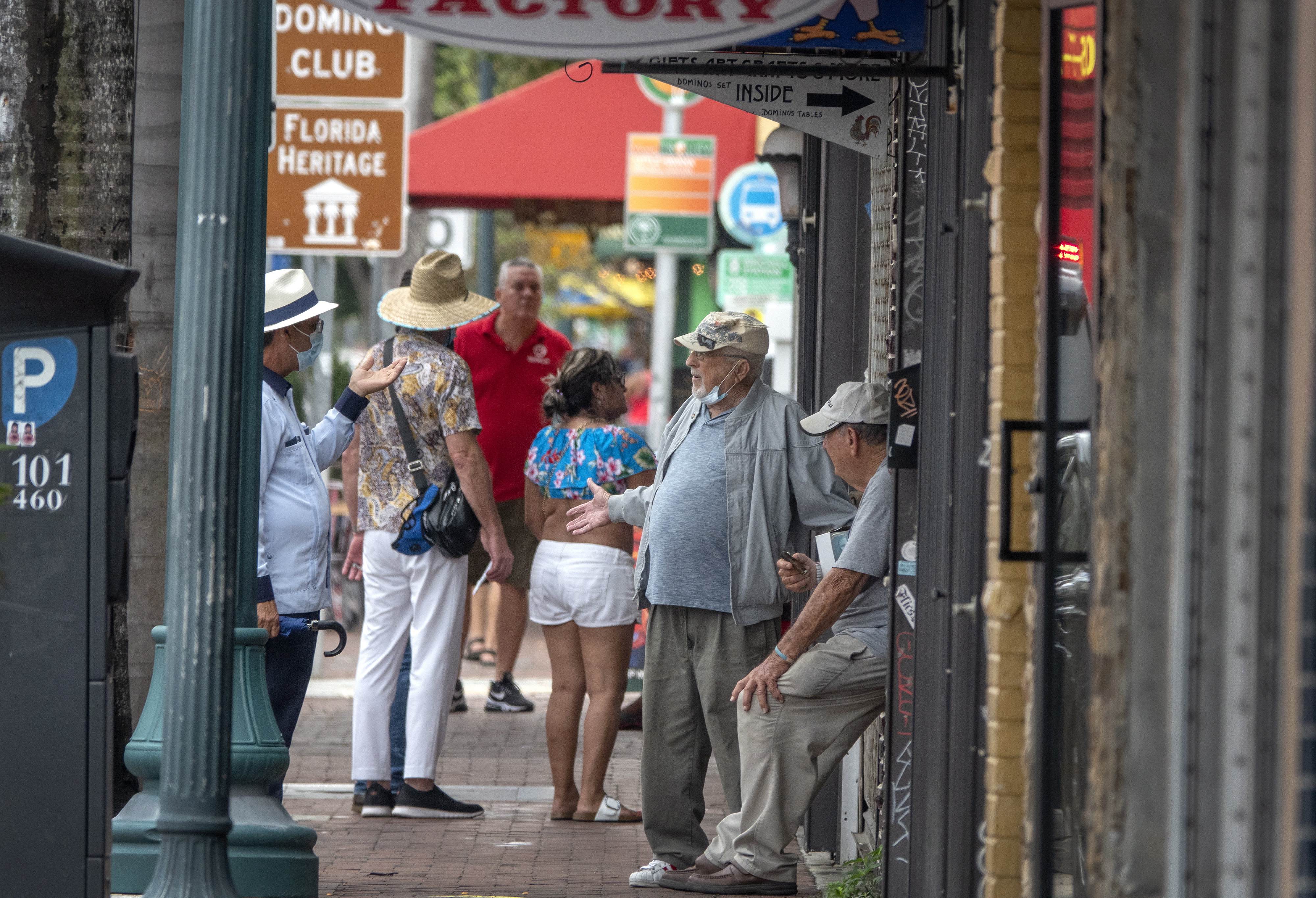 Gimenez said he was consulting with the county attorney regarding the mask mandate at businesses to ensure compliance with the new order.

Florida has long been a COVID-19 hotspot, with nearly 700,000 confirmed virus cases since the pandemic began in March. Nearly 14,000 Floridians have died.

The governor reluctantly closed bars and nightclubs on St. Patrick's Day due to the outbreak, and days later, restricted restaurants to takeout dining. Amusement parks ground to a halt.

The closures battered the economy, leaving hundreds of thousands of Floridians unemployed. Since March 15, More than 2.5million Floridians have sought unemployment benefits. 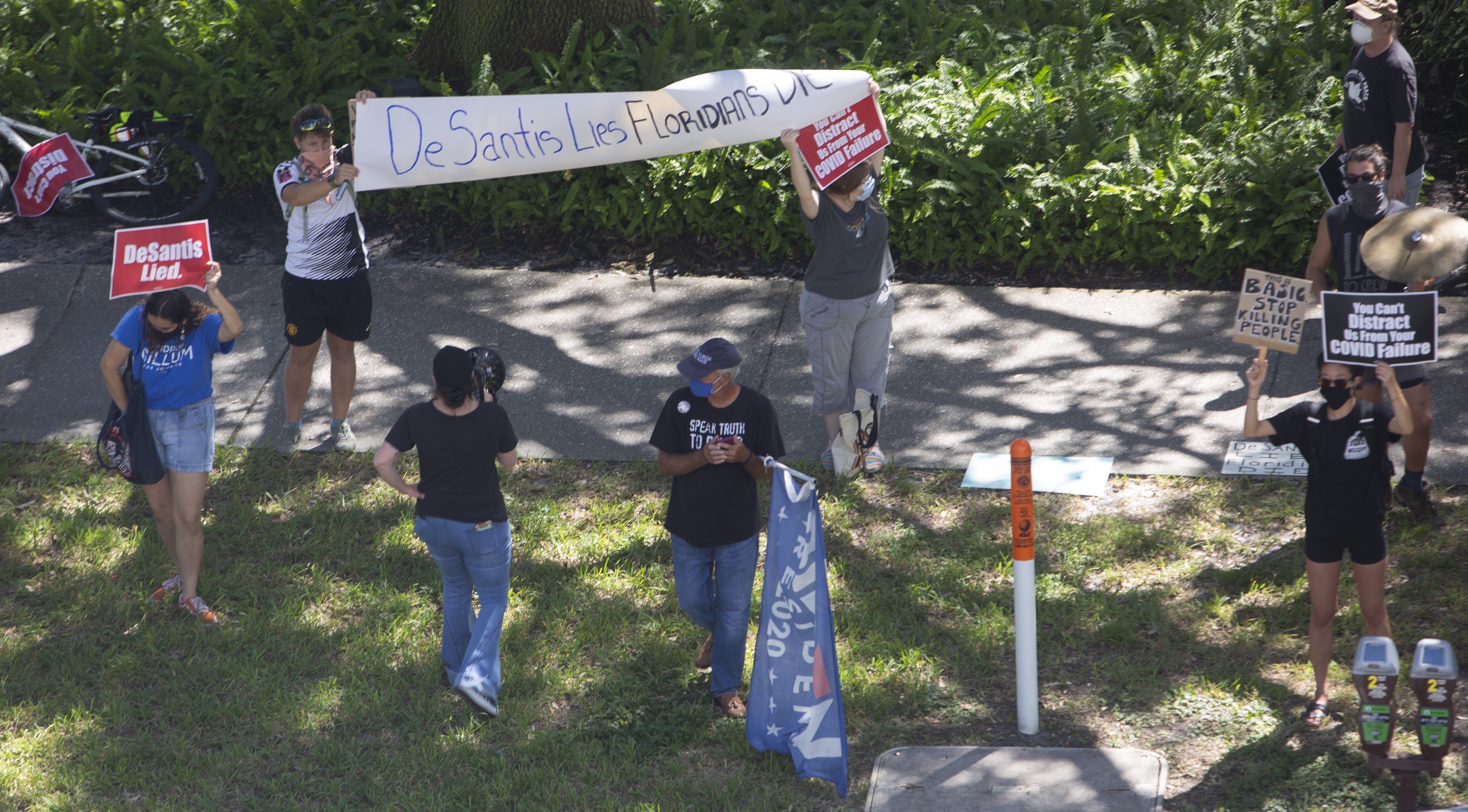 DeSantis slowly reopened the state for business since then, allowing restaurants and bars to reopen at half capacity, while deferring to local officials who advocated reopening more slowly in the pandemic’s epicenters in South Florida.

"We've been able to put a lot of people back to work over the last few months, and obviously we have more to do," the governor said.

The governor had resisted imposing a statewide mask mandate, but had allowed cities and counties to do so and impose stricter measures than he was willing to do, including closing beaches and public venues to keep the virus from spreading.

The governor's action does not preclude private businesses, such as grocery stores and sports venues, from requiring masks. In February, Florida will again host the Super Bowl.

With the economy and his political standing foundering, DeSantis has been under pressure to revive the economy. 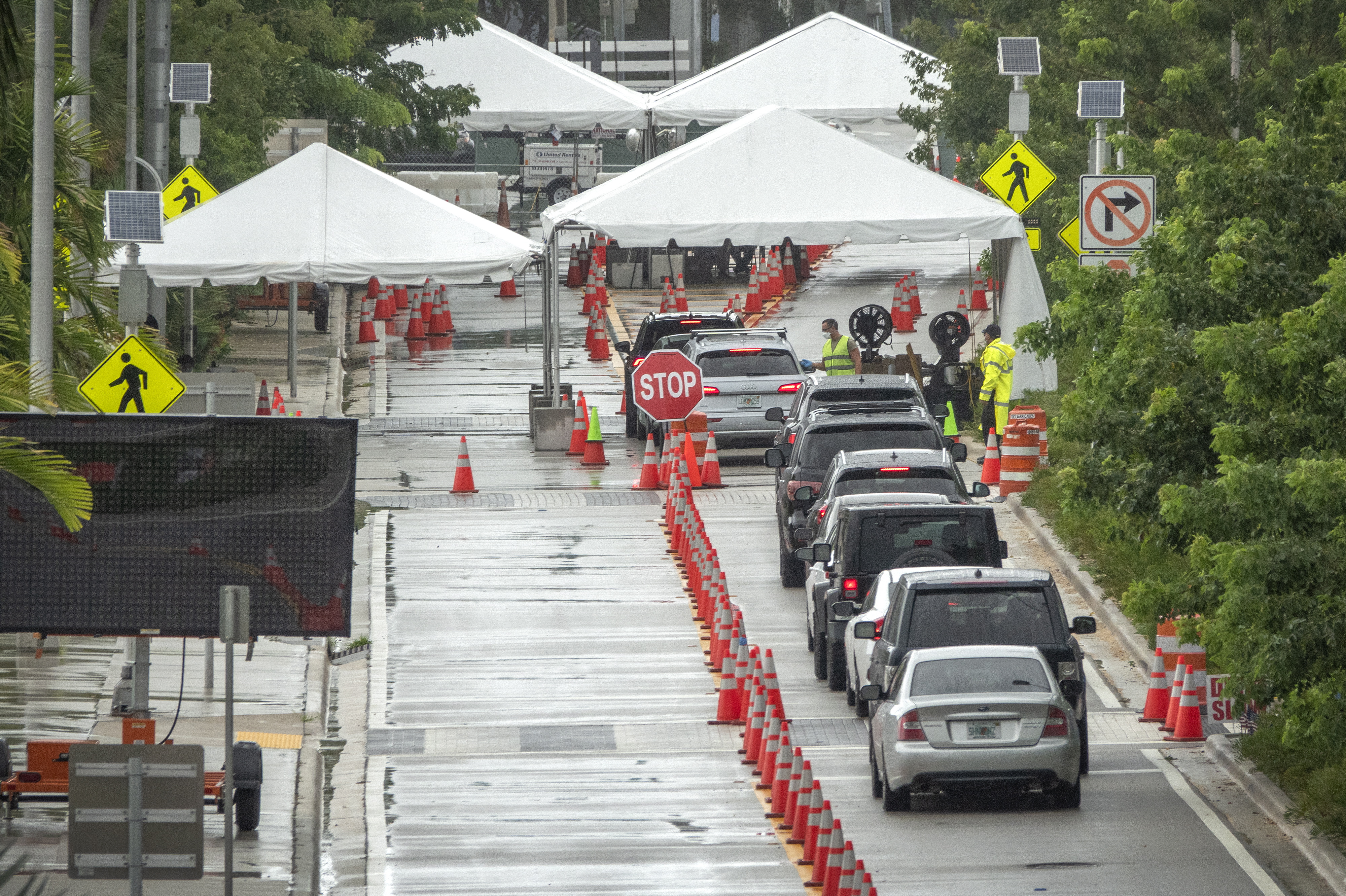 As the state has reopened, DeSantis and tourist-dependent businesses have been trying to woo back visitors.

Like Trump, DeSantis has questioned the efficacy of closures, arguing that states that had more aggressively shut down, including California, have fared no better.

"The state of Florida is probably the most open big state in the country," he boasted Friday.

California has had more than 800,000 coronavirus cases and more than 15,000 deaths associated with the outbreak.

While California has suffered slightly more infections and deaths, its population is nearly twice that of Florida.

Earlier this week, the country surpassed 200,000 deaths from COVID-19, as the outbreak intensified in the US heartland.

New infections in Florida have steadily declined since the state’s caseload peaked in July.