Undercover footage taken inside the slaughterhouse of Gressingham Duck, based in Redgrave, Suffolk, was taken by animal rights campaigners at the end of September. 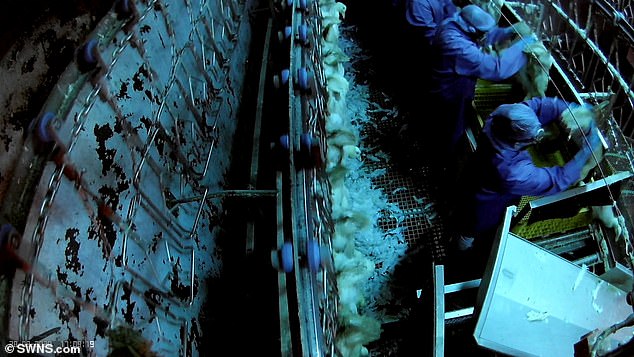 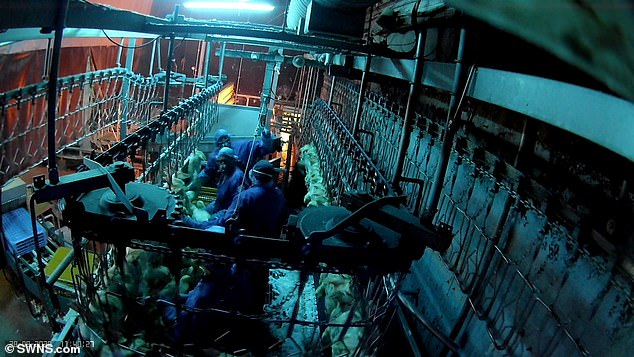 Animal Justice Project (AJP) claims that Red Tractor is unethically stamping its approval on practices inside the slaughterhouse that are condemned by the government’s own advisory body on animal welfare.

The Food Standards Agency (FSA) has now said that it wants to inspect CCTV from inside the Gressingham slaughterhouse, over the reported animal cruelty and suffering.

Gressingham Duck has said that the AJP footage shows ‘no clear evidence of abuse or neglect’ by its staff and strongly denied its claims.

The investigation comes as duck and geese sales are set to soar this Christmas, with the ‘Rule of Six’ potentially enforcing smaller family gatherings.

AJP says the footage shows the ‘harsh reality’ inside the Gressingham slaughterhouse.

It shows ducks being roughly grabbed by workers from crates, dragged by their heads, necks, and wings which AJP claims is in breach of guidelines.

The birds can then be seen being live-shackled and sent along a shackle line into an electrical waterbath – both practices it says are condemned by the European Food Safety Authority (EFSA). 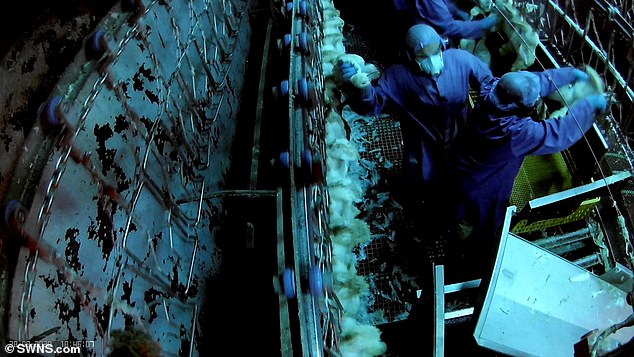 Footage shows ducks being roughly grabbed by workers from crates, dragged by their heads, necks, and wings which AJP claims is in breach of guidelines

EFSA has urged, in scientific opinion requested by the European Commission, that live shackling and waterbath electrical stunning be replaced ‘as soon as possible’, ‘to spare birds from severe welfare consequences’.

Over just one working day, AJP claim to have recorded a fifteen breaches of EU, UK government, and Red Tractor guidelines at the Gressingham slaughterhouse.

In disturbing footage, workers could be heard yelling heatedly at one another, which lead to them aggressively manhandling the ducks, dragging them across crates by their heads, necks, and wings – in breach of guidelines.

Workers filmed are accused of using excessive force when loading the ducks into the shackles, and birds were left hanging for two periods, over 14 minutes and almost 12 minutes.

Both of these times are well over the maximum time of two minutes specified in both UK and EU legislation, according to AJP.

Live shackling is also a practice that has been long condemned by the Farm Animal Welfare Council (FAWC).

The council stated in 2009 that it would welcome the end of pre-shackle slaughter inversion and live shackling, which ‘may cause considerable pain and distress’, and should be phased out. 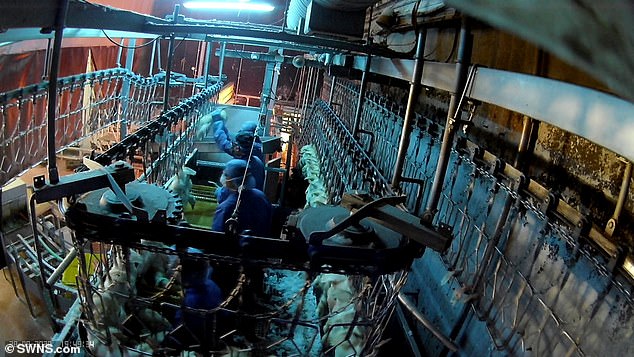 EFSA has urged, in scientific opinion requested by the European Commission, that live shackling and waterbath electrical stunning be replaced ‘as soon as possible’

The AJP is demanding action by the Food Standards Agency (FSA) – which states that ‘immediate and robust enforcement action will be taken’ if animal welfare issues are found.

Other key findings that Animal Justice Project claim to have found in their investigation include:

In December 2019, Animal Justice Project released a shocking undercover investigation at one of their farms in Norfolk.

Last year’s investigation revealed workers breaking the necks of ducks and throwing their twitching bodies back into the flock of running ducks.

Ducks also received a complete lack of enrichment, and no open water – so the birds could only dip their heads into drinkers.

The vast majority of the millions of ducks and geese farmed in the UK each year are reared in sheds with no access to water, aside from drinkers.

Animal Justice Project, supported by over 6,000 people who signed their petition – including Harry Potter star Evanna Lynch – is now advocating an end to duck farming.

The group is urging consumers to keep animals off their plates entirely this Christmas and choose plant-based alternatives instead.

‘There are several non-compliances which can be clearly seen and which need to be addressed.

‘The video shows a cramped hanging-on bay and a slaughter line which is being run too quickly for the available space, resulting in the ducks being frequently handled inhumanely and without due care. 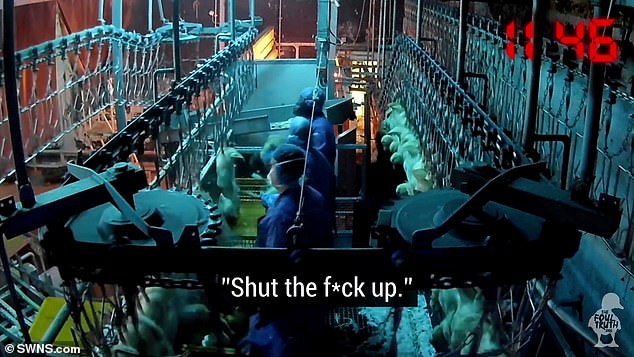 ‘Operatives argue with each other; they are distracted and hence take poor care.

‘Some birds are not removed from the crates before the crate drops down the conveyor.

‘Not all birds are shackled by both legs. Dead and injured birds are hung on shackles.

‘Shackled birds are allowed to touch each other meaning that birds further up the line will receive pre-stun non-lethal shocks.’

‘This is an unnatural position, and exerts considerable force on the bones and soft tissues of the legs and feet.

‘It is an inhumane way to treat birds of any species. No organisation should be certifying practices that are inhumane.’

Claire Palmer, spokesperson for AJP said: ‘This is the tragic reality of duck farming and slaughter in the UK, but it is not just ducks who suffer.

‘Intensive animal farming centres on exploitation for profit, not the rights of animals.

‘CCTV will not prevent suffering, as our own cameras have shown, because it is innate in this industry.

‘Consumers need to know that their choices in the run-up to Christmas and beyond can have a huge impact on other animals’ lives.

‘We urge them to have a truly compassionate Christmas and make that all-important switch to the vast array of plant-based foods now widely available on the high street.’

The spokesperson said: ‘The majority of the footage shows processes that are indicative of a well-run, high welfare poultry processing plant.

‘There is no clear evidence of abuse or neglect by Gressingham staff in this footage.

‘There are actions that are not representative of the high standards expected of our factory.

‘They will be fully investigated in conjunction with external auditors and the appropriate actions taken to ensure immediate improvements.

‘Gressingham Foods are registered under Red Tractor, meaning that they are subject to full independent audit and defined standards of production.

‘The welfare of our birds is an absolute priority. We work to the highest standards in hygiene, bio-security and animal welfare across our factories and farms.

‘All staff responsible for the welfare of our birds have the necessary training with regular updates for continuous improvement.’ Megan Fox Officially Files For Divorce From Brian Austin Green
We and our partners use cookies on this site to improve our service, perform analytics, personalize advertising, measure advertising performance, and remember website preferences.Ok