A former Carlton footballer has been charged with possession of methamphetamine and the proceeds of crime.

Ron De Iulio, who played more than 100 games with the Blues during the 1990s, was apprehended on Swanston Street on June 18 by detectives from the north-west metro regional crime squad, according to a Victoria Police spokeswoman. 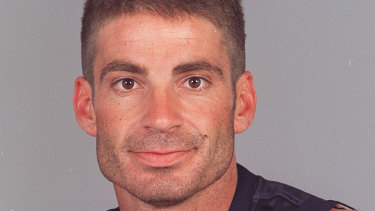 The 49-year-old was allegedly found with a small quantity of the drug commonly known as ice and an unknown quantity of cash, which police prosecutors will allege was the proceeds of crime.

Mr De Iulio, who now lives in St Kilda East, will face the Melbourne Magistrates Court on November 10 for a mention hearing.

Originally drafted by North Melbourne in 1991, Mr De Iulio was traded to Carlton without playing a game for the Kangaroos.

In his first season at the Blues, Mr De Iulio finished second on the club’s goal-scoring list behind club legend Stephen Kernahan, before finishing his AFL career as a backman.

After he was delisted in 2000, Mr De Iulio has worked as a foreman in the construction industry.