A former Brexit Party MEP admitted she had made a ‘rookie error’ after accidentally voting against Boris Johnson’s Internal Market Bill – just moments after launching a stinging attack on opponents of the bill.

The newly created peer Claire Fox fervently defended the bill during an impassioned speech in the House of Lords and said it was important that ‘political sovereignty is safeguarded’.

However she later admitted she had accidentally voted against the bill and had not got the hang of the voting app’ after social media users pointed out her error.

The mishap comes as peers last night voted by large margins to delete key clauses from the Internal Market Bill, including a measure giving ministers powers to breach the Withdrawal Agreement brokered with Brussels last year. 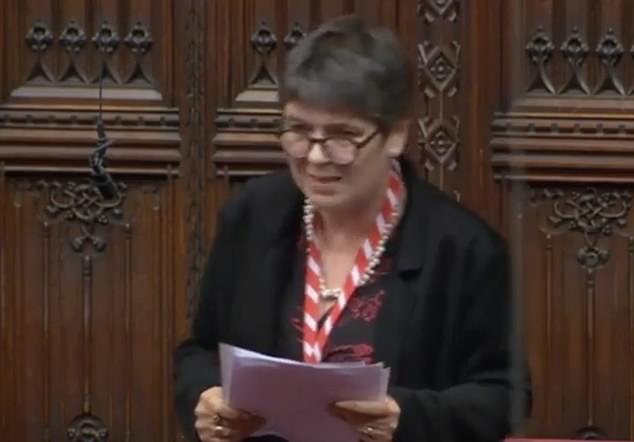 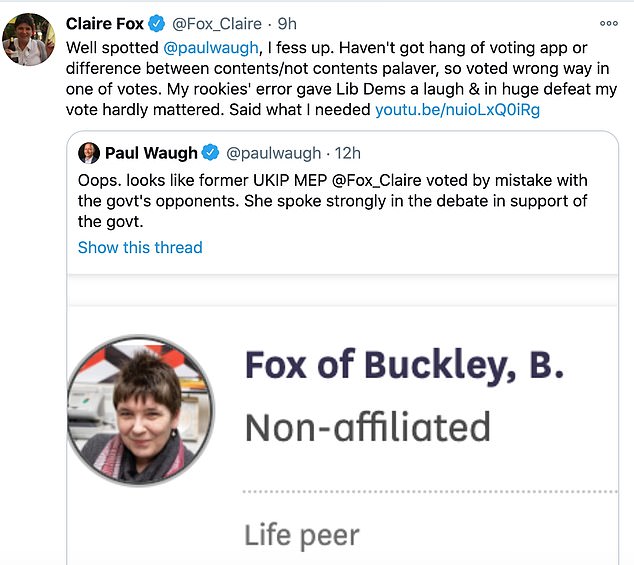 Taking to Twitter Baroness Fox of Buckley wrote: ‘I fess up. Haven’t got hang of voting app or difference between contents/not contents palaver, so voted wrong way in one of votes.

‘My rookies’ error gave Lib Dems a laugh & in huge defeat my vote hardly mattered. Said what I needed.’

During her speech the MEP told the chamber: ‘This bill should be seen as in my opinion a perfectly moral and good faith attempt to temper a treaty that threatens the UK’s geographic integrity as an internal market. And a democratic mechanism to ensure that political sovereignty is safeguarded.

‘The controversy of the bill is posed in the most dramatic terms about the morality of abiding by international law, but at its heart, as in everything to do with Brexit, it is about who rules. It is about who has the power to make the decisions in a sovereign country.

‘Yet opponents here today seem to believe that national sovereignty and democracy can be legitimately constrained by simply repeating the mantra ”upholding international law” but that phrase should not be deployed as a counter to national law made by our elected parliament.’

Ms Fox went on to explain that that main aim of the Internal Market Bill was to give the UK government the power to override aspects of an international treaty.

She continued: ‘Under pressure from Brexiteers, Boris Johnson contested and won the December 2019 general election on a manifesto that effectively repudiated part of the withdrawal agreement.

‘He pledged the UK would not be tied to EU rules. The government are now trying to keep that promise to the electorate and that’s at least honourable. 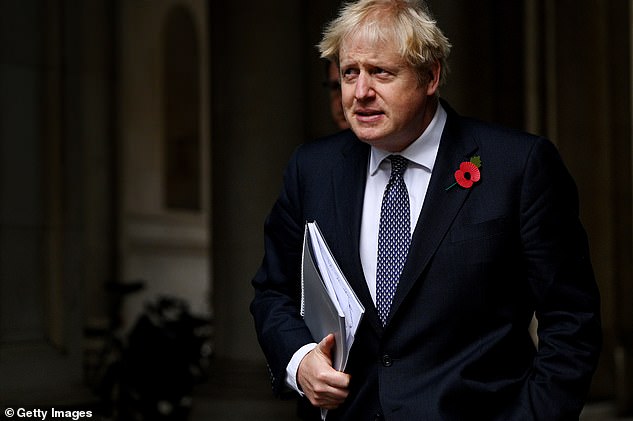 ‘Hence the aim of this part of this Internal Market Bill is to give the UK government the power to override those aspects of an international treaty that would, for example, bind Northern Ireland to a range of EU rules. That could if not tempered hand arbitration of dispute to the court of justice of the European Union.

‘It is essential that the Government has the power to counter such an egregious limit to UK sovereignty.

‘The government is not breaking the law, it is making the law, by proposing a Bill that would allow it to change some of its commitments to international treaty by getting it voted through the democratic chamber.

‘That is what governments are elected to do in a democracy and it is their right as a sovereign elected body to do so.’

She added: ‘What are the electors to make of those in this House claiming simply they are driven by protecting the integrity of the law in all instances?

Following the accidental vote, social media users took to Twitter to poke fun at the situation

‘Yet they have lobbied for, or remained silent as endless Covid regulations that have trashed civil liberties, flaunted legal norms and stretched the law to its limits have been passed by my Lords time and again.

‘My Lords may be worried by the damage to the UK’s reputation abroad.

‘I worry to the damage this House might inflict on the UK’s democratic reputation here at home if it insists on emasculating this Bill by amendments.’

While another added: ‘I would suggest this is the fault of the app ‘designers’.

Another person commented: ‘Well done you for admitting your mistake. I wish politicians would do that more often!’ Scientists advise Brits to avoid singing and BOARD GAMES at Christmas