A former chef who raped a 16-year-old girl at a Victorian restaurant and then asked her to help conceal the crime from his wife has avoided being jailed.

In June 2019, Graeme Walter was the head chef at Dromana restaurant Two Buoys, where he, the girl and other staff regularly drank after work. 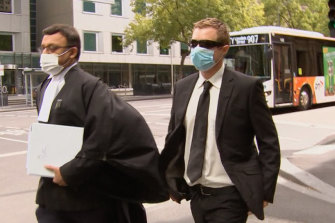 One night, when Walter and the girl were drunk and the last ones at the restaurant, he pulled down her pants and underwear and twice sexually penetrated her while they were in the bathroom. He had earlier tried to kiss her but she pushed him away.

The pair both vomited in the bathroom afterwards. Walter later drove the girl to her home and said he shouldn't have done what he did because of his wife and family, but he also asked the girl to wash his messy clothing to avoid questions from his wife, and the girl agreed to do so.

County Court judge Kevin Doyle on Thursday said he was initially inclined to jail Walter, but told the 34-year-old he changed his mind given the former chef's personal circumstances and considering prosecutors were open to a non-custodial sentence.

"You have missed going to jail by a sliver in this case," Judge Doyle said when imposing a two-year community correction order after Walter pleaded guilty to two charges of sexually penetrating a child of 16 or 17 under his care or supervision.

The girl resigned in the days after the assault, the court heard, and later told a bar manager, who in turn went to Walter. He asked the bar manager not to tell anyone and resigned over the following months and has not worked as a chef since.

The girl's family noticed a change in her behaviour and her brother, noticing she became quiet and defensive, asked why she left Two Buoys. She admitted something happened at work, but she couldn't tell as doing so would "ruin someone's life".

She went to police in January last year and Walter was arrested two months later.

The girl previously told the court she became depressed, had sleep problems and nightmares, no longer wanted to work in hospitality, lost her appetite and didn't feel safe in the community. Her relationships with her boyfriend and father had suffered, and her father felt guilt at not being able to protect her.

Judge Doyle said Walter's offending was extremely serious as he exploited a power imbalance over the girl, who should have been safe at work.

"It is clear the impact of your offending on the victim has been substantial and it is likely to endure for some time," he said.

"Because of your selfish behaviour she has abandoned a career she might have had and her relationships with her father and her partner have been affected."

Walter had been a chef since his teens and worked at restaurants on Hamilton Island and on the Mornington Peninsula, but now hopes to work as a drill operator in the mining industry.

He and his wife separated after the offending became known and they share custody of their three children.

Walter regularly binged on alcohol and used cocaine and ecstasy during his time as a chef, Judge Doyle said, but has since stopped.

Walter told a psychologist he was disgusted by what he did, felt terrible for his family break-up and was sorry towards his victim. The victim watched Thursday's sentence via a video link.

The psychologist diagnosed Walter with anxiety and depression and Judge Doyle said a prison term would have weighed heavily on him.

Walter will be a registered sex offender for the next 15 years.