This is the moment a former Marine Corps veteran snatched a gun from the hands of robber who burst into a gas station demanding money.

The Marine was chatting to the clerk at the Chevron station near I-8 and Fortuna Road, Arizona on Wednesday, at around 4.30 a.m. when two men dressed in black entered the store.

Surveillance footage shows the former military man, who has not been named, reacting with lightning speed when one of them men raises his and gun and pointed the gun at the cashier.

Within eight seconds, the hero grabs the arm of the robber and snatches the gun out of his hand, sending his accomplice fleeing.

‘Upon arrival, deputies learned of suspects entering the Chevron, one of them armed with a handgun. The armed suspect walked next to a store customer while pointing the weapon toward the cashier when the customer acted immediately and disarmed him,’ read a portion of the statement. 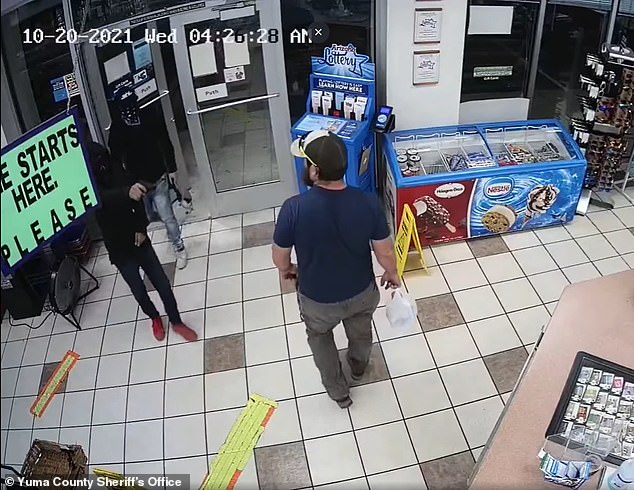 SHOWDOWN: Two men dressed in black (left) entered a Chevron station in Yuma County, Arizona, at 4.30 a.m., one of them armed with a handgun, while another customer was also in the store (right)

The customer then detained the suspect on the ground before Yuma County Sheriff’s deputies arrive, officials said.

The suspect with the handgun is a minor and was booked into the Yuma County Juvenile Justice Center for a count of armed robbery and a count of aggravated assault.

His accomplice, and another suspect who stayed outside at the door, fled the area and remain on the loose, according to local officials. 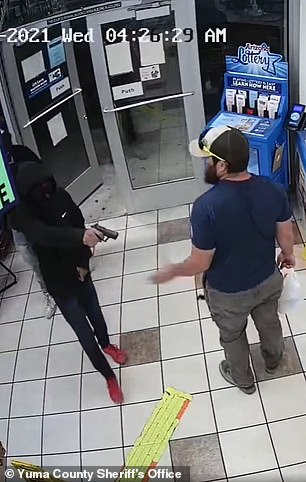 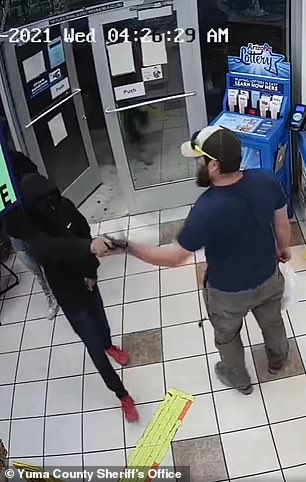 Yuma County Sheriff’s Office released footage of an October 20 incident where two out of three suspects reportedly walked a Chevron while one of them was armed with a gun. A Marine Corps veteran then takes matters into his own hands. 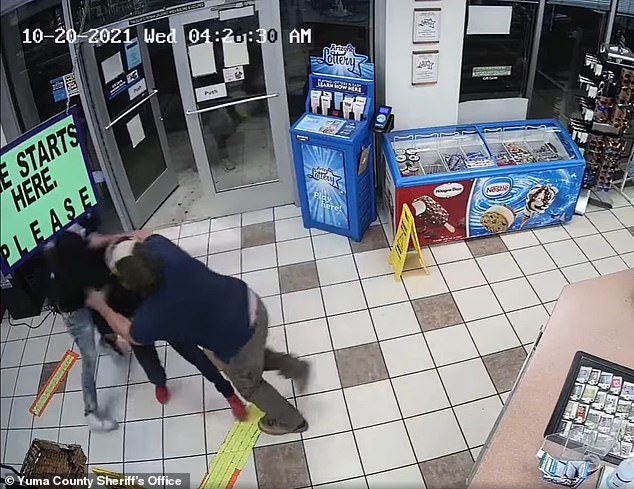 MIDDLE OF THE PACK: The armed suspect (wearing red shoes) can be seen in between of a brawl between the customer and the other suspect (wearing washed jeans) before he goes flying past the green cardboard sign saying ‘line starts here, please’ 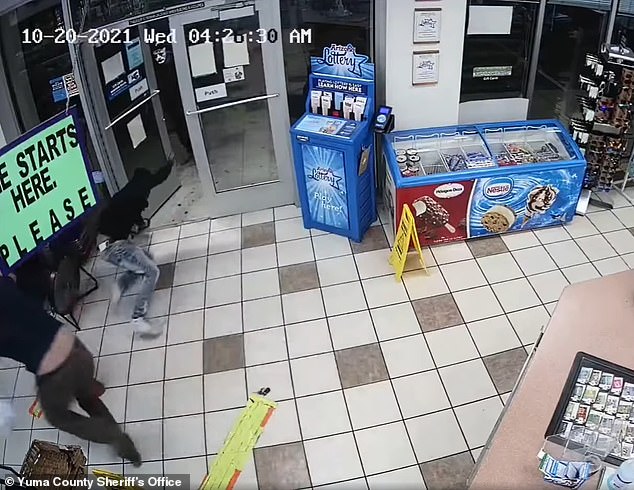 NOT SO FAST: The former Marine can then be seen detaining the armed suspect (not pictured) while the other man heads to the store’s exit before fleeing the scene shortly afterwards

The customer who fought the robbers was later contacted and explained that he was a former U.S. Marine and thanked his training for helping him alienate the situation.

‘When Deputies contacted the customer, who previously served in the United States Marine Corps, and asked how he was able to take control of the situation, he stated, ‘The Marine Corp taught me not to [mess] around,’ read a portion of the statement.

No injuries and deaths were reported and an investigation on the matter is ongoing.

Anyone with information regarding this case, please contact the Yuma County Sheriff’s Office at 928-783-4427 or 78-CRIME to remain anonymous.