As Fox News host Tucker Carlson noted on his program, he's more than willing to give airtime to outlandish claims. "We literally do UFO segments," he said.

But even Carlson said he was fed up with the total lack of evidence produced by Sidney Powell, one of President Donald Trump's attorneys, in her unfounded allegation that electronic voting systems had switched millions of ballots to favour President-elect Joe Biden. 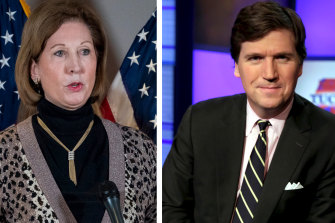 "We invited Sidney Powell on the show. We would have given her the whole hour," Carlson said on Thursday night. "But she never sent us any evidence, despite a lot of requests, polite requests. Not a page. When we kept pressing, she got angry and told us to stop contacting her."

Carlson also noted that "she never demonstrated that a single actual vote was moved illegitimately by software from one candidate to another. Not one."

Carlson's rebuke of Powell marked a notable departure for a show – and a network – that has given hours of credulous coverage to false claims by Trump and his associates that fraud cost him the election. It came after Fox News aired a rambling news conference on Thursday featuring Powell and Trump’s personal attorney, Rudy Giuliani, making numerous false and far-fetched allegations about the election.

The segment also put Carlson at odds with other Fox News hosts like Jesse Watters, who on his Thursday show described Powell and Giuliani's news conference as "a big shot of adrenaline".

Powell, who didn't respond to a message from The Washington Post, pushed back on Carlson in a statement to the Washington Examiner, saying that she would "encourage him and all journalists to review all the materials we have provided so far and conduct their own investigations".

On his Thursday show, Carlson didn't discount the larger claims of Trump's attorneys that massive fraud disrupted the election – an allegation that has been repeatedly dismissed in court and for which the White House has presented no public evidence.

While conceding that Giuliani "did not conclusively prove" any fraud at Thursday's new conference, Carlson argued that "he did raise legitimate questions and in some cases, he pointed to what appeared to be real wrongdoing". And he praised Giuliani and Powell for calling into question the security of electronic voting.

But Carlson said that Powell had gone too far without proof in claiming that Trump "had won by a landslide," and that a conspiracy masterminded by electronic voting firms had changed the results. Her statements on those subjects have been repeatedly disproved, The Washington Post's Fact Checker reported on Thursday.

"What Powell was describing would amount to the single greatest crime in American history," Carlson said.

Carlson emphasised that he "did not dismiss any" of Powell's claims, and said he "took Sidney Powell seriously with no intention of fighting with her". But he said he was disturbed that she didn't produce any evidence for his show.

"We simply wanted to see the details. How could you not want to see them?" he said.

Carlson ended the segment by defending his decision to call Powell out.