French company Valneva has started manufacturing its Covid vaccine at its Scottish facility with UK supplies expected to be available by the end of 2021 if successful.

The French biotech firm is still mid-way through clinical trials for its vaccine candidate but it has started producing the jab doses already at the site in Livingston, West Lothian.

Successful trials and the approval of the vaccine, of which Britain has already ordered 60million doses, could see the first batches delivered by the end of 2021.

The jab is an ‘inactivated whole virus vaccine’ which uses a damaged version of the real coronavirus to stimulate the immune system and can be kept in a normal fridge, similarly to the Oxford/AstraZeneca vaccine, which makes it easy to roll out.

No other whole virus vaccines have yet been approved for use in Britain, Europe or the US, with the others using only fragments of the virus or genetic material called mRNA. 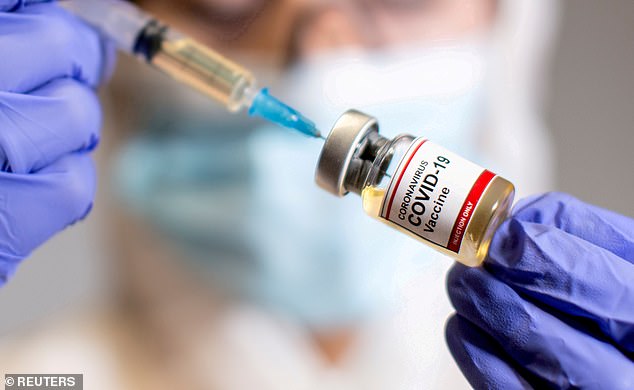 The French biotech firm is still mid-way through clinical trials for its vaccine candidate but it has started producing the jab doses already at the site in Livingston, West Lothian

Health Secretary Matt Hancock tweeted today: ‘The Valneva vaccine will be another vital tool in our fight against the virus if approved.

‘The start of manufacturing in Livingston today is another fantastic example of the strength of our Union, as we work together as one United Kingdom to tackle the virus.’

Health Secretary Matt Hancock tweeted today: ‘The Valneva vaccine will be another vital tool in our fight against the virus if approved’

The announcement comes amid Boris Johnson’s visit to Scotland, which he will use to argue that the Union has been integral in supporting people north of the border during the pandemic.

The candidate is currently in phase one/two trials and will need approval from the Medicines and Healthcare products Regulatory Agency (MHRA) before it is rolled out.

According to Department of Health Data, a total of 7.2 million people across the UK have received their first dose of a Covid-19 vaccine.

Here is a breakdown of each country:

This type of jab contain viruses whose genetic material has been destroyed by heat, chemicals or radiation so they cannot infect cells and replicate but can still trigger an immune response.

The technology has been used in vaccines to treat seasonal flu, hepatitis A, polio and rabies.

Meanwhile the Covid-19 vaccines developed by Chinese companies Sinovac and Sinopharm, and India’s Bharat Biotech, which have all been approved for emergency use in their countries, are also inactivated vaccines.

The virus that causes Covid-19, Sars-Cov-2, is studded with spike proteins which it uses to enter human cells.

While the genetic material virus in the Valneva vaccine candidate has been destroyed, the inactivation process preserves the structure of the spike protein, which helps the body identify the substance as a ‘foreign invader’ and induces an immune response.

So later, when a vaccinated person comes into contact with the virus, the immune system is primed for attack.

Initial results from the ongoing clinical study, involving 150 participants at testing sites in Bristol, Southampton, Birmingham and Newcastle, are expected in April.

These tests will show whether the vaccine produces a safe and effective immune response against Covid-19.

If successful, larger tests will be planned for April, with more than 4,000 UK volunteers taking two doses and will include those aged 18-65 as well as over-65s.

The Department for Business, Energy and Industrial Strategy (BEIS) said that manufacturing the vaccine now means it can be rolled out quicker if it receives regulatory approval.

It follows a joint investment in the Livingston facility by the Government as part of an agreement to secure early access to the jab, according to the Government.

The Oxford/AstraZeneca and Pfizer/BioNTech vaccines are currently being rolled out across the UK, with Government data showing more than 7.1 million people have received their first vaccine dose.

Valneva will potentially have the capacity to supply up to 250 million doses of the inactivated whole virus vaccine – containing whole bacteria or viruses which have been killed – to the UK and internationally if successful.

Business Secretary Kwasi Kwarteng said: ‘By starting manufacturing, we will have a running start at rolling these out as quickly as possible to protect the British public if it receives regulatory approval.

‘This facility in Scotland, backed by millions from the Government, will help us beat coronavirus and boost our resilience against future pandemics.’ 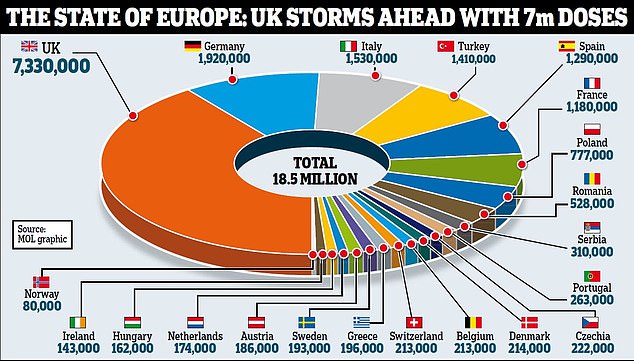 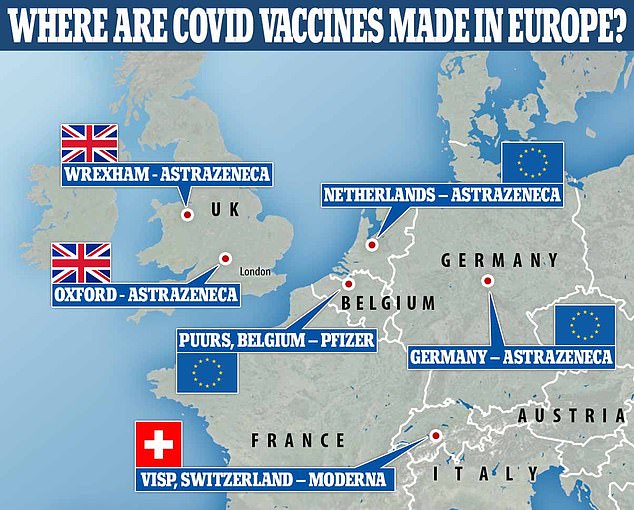 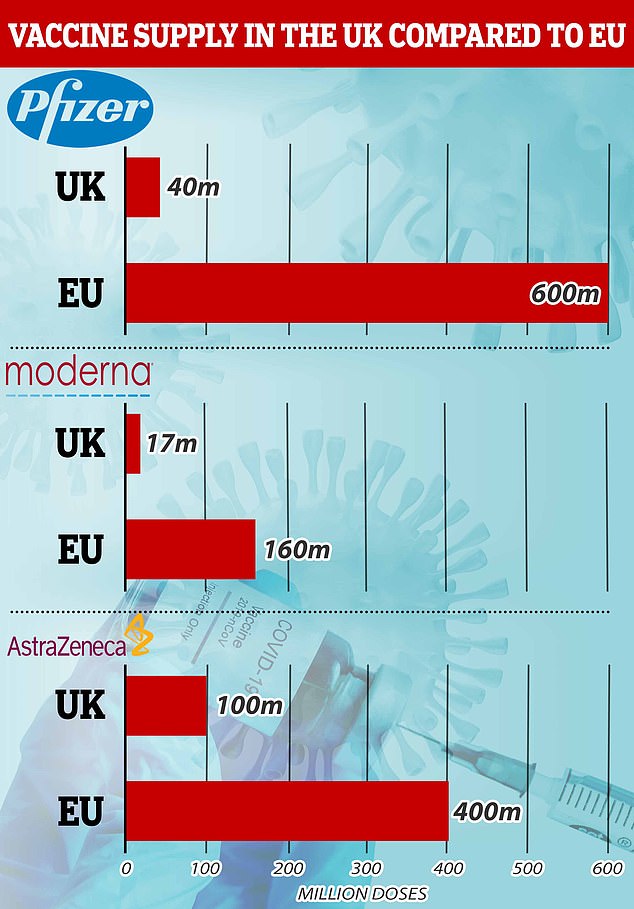 These set of graphs show the number of vaccines ordered by the UK and the EU. The EU has also ordered a number of other vaccines, including 300million Sanofi-GSK doses and 405million CureVac doses

The facility will establish a permanent UK ability to manufacture inactivated viral vaccines, a type which is also used for flu, polio and rabies jabs, according to the BEIS.

Valneva chief executive Thomas Lingelbach said: ‘Our team in Scotland have done an amazing job to get manufacturing started so quickly.

‘We believe that our vaccine, assuming successful development, can make a major contribution in the UK and beyond.’

It comes after  EU chiefs want more of the Oxford jabs – made in Staffordshire and Oxfordshire – be handed over to make up for a 75million shortfall on the continent.

The European Commission said the Anglo-Swedish firm was obliged to meet its contractual obligations despite production issues at its Belgian site.

However, so far both AstraZeneca and Pfizer look to be holding firm against the sabre-rattling from Brussels.

It comes after MEPs warned that the UK would ‘suffer’ for denying the EU, and the bloc’s health commissioner insisted Britain should not receive priority – even though it signed a contract with AstraZeneca three months before Brussels did.