Frenzied activity of hotel staff where Meghan and Harry will stay

Tight security, beer deliveries and purple flowers changed for white: Frenzied last-minute activity of hotel staff where Meghan and Harry will stay tonight – so everything is just perfect for the Royal arrivals

Staff at the hotels where Prince Harry and Meghan Markle will stay before their wedding were in a frenzy of activity today in preparation for the big night.

Gardeners at the luxurious Coworth Park hotel in Ascot, where Harry will sleep on Friday, dug up two beds of purple flowers at the entrance and replaced them with white ones.

A van with a logo for Singha beer was seen making a delivery at the hotel where Harry will spend his final night as a bachelor accompanied by his elder brother Prince William.

Coworth Park is known for its ‘cheeky’ cocktail bar which is decorated on an equestrian theme in recognition of nearby Ascot and is sure to be a hit with the keen polo players. 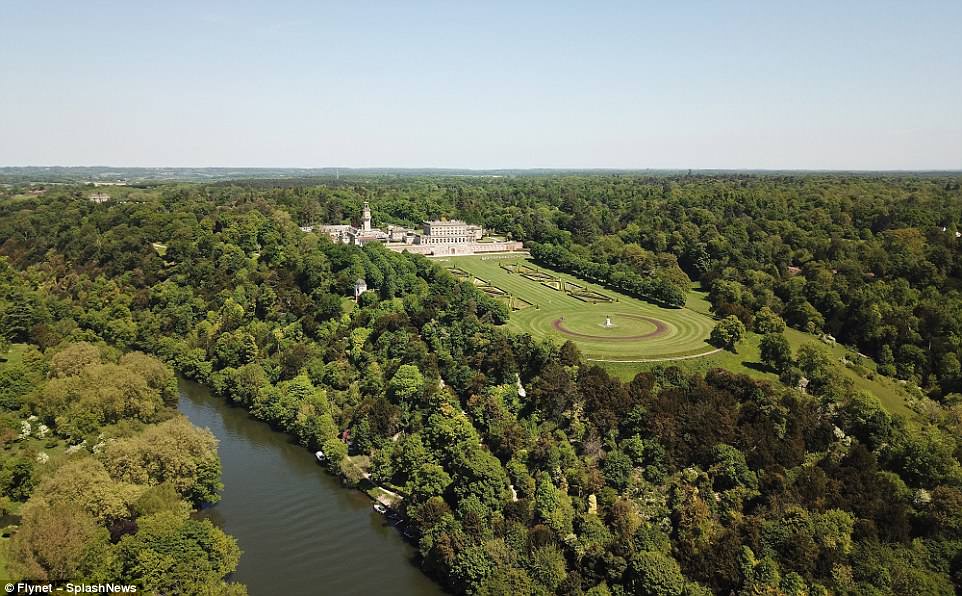 A aerial view of the £1,500-a-night luxury Cliveden Hotel in Taplow, Berkshire, where Meghan Markle will spend tonight with her mother, Doria Raglan. It is from here that Meghan will make the 25-minute trip to Windsor Castle to marry Prince Harry 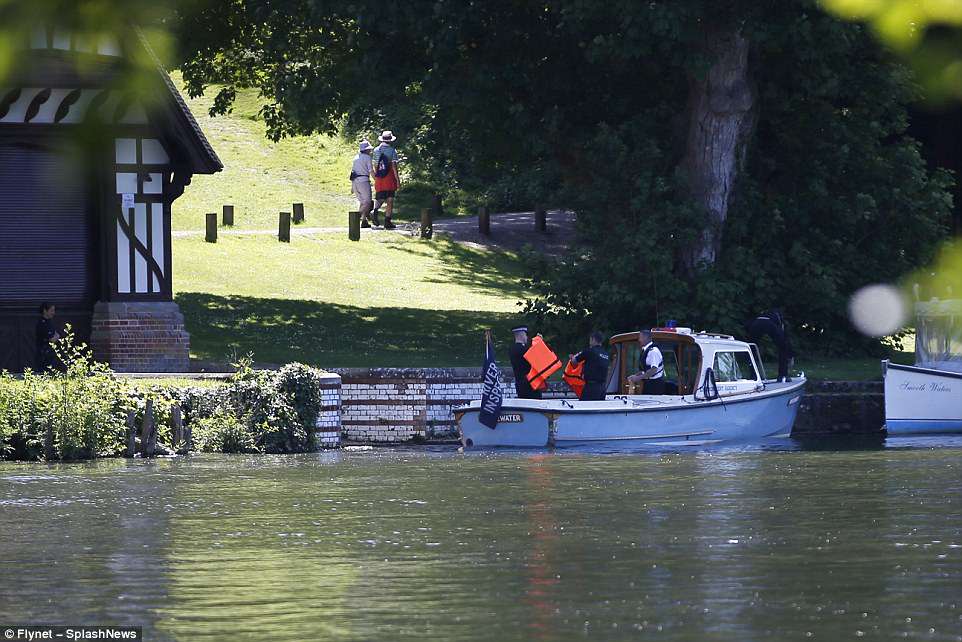 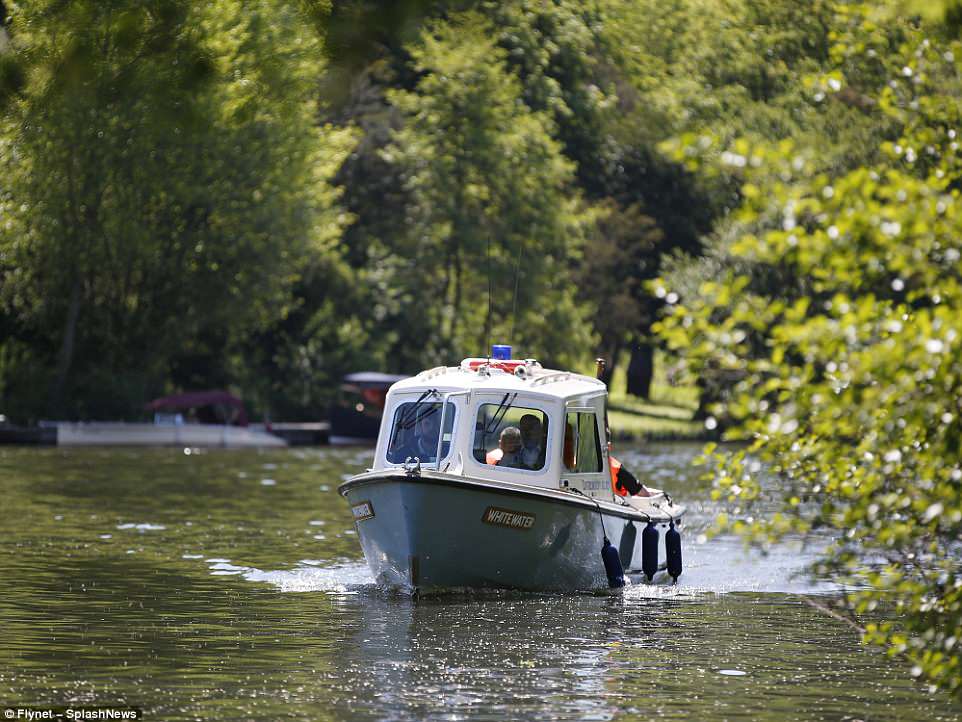 Teams of officers are patrolling the river adjacent to the estate as they make the final preparations for Meghan’s arrival. It is unknown whether friends of the former Suits actress who have jetted in for the wedding tomorrow will be staying there too

The Duke of Cambridge and his younger brother regularly play polo on Coworth Park’s world class grounds, where last year Meghan watched her then boyfriend play.

A spa worker was also seen arriving at the hotel yesterday afternoon where the princes could pamper themselves with manicures and pedicures for the big day.

Coworth Park describes itself as the ‘scenic route to five-star bliss’.  The hotel’s website adds: ‘Coworth Park offers idyllic relaxation in many guises, from a rural detox to an indulgent, romantic escape.’

Meanwhile staff at the Grade I-listed £1,500-a-night Cliveden House hotel in Taplow, Berkshire, where Meghan will sleep, frantically mowed lawns and lugged boxes of rolls and goodie bags as all was made perfect before the star arrives.

Meghan will be staying at the hotel with her mother, Doria Ragland, though Kensington Palace has not confirmed whether her closest girlfriends, Jessica Mulroney, Misha Nonoo and Lindsay Roth, will be dropping in.

Security was tight yesterday at both locations. An extensive team of suited bodyguards guarded the entrance to Coworth Park supported by uniformed officers from the Hampshire Constabulary Marine Unit who arrived in a marked van. Meanwhile at the exclusive Coworth Park hotel in Ascot, Berkshire, a female gardener works at changing the hotel’s purple flowers to a more wedding-appropriate white in preparation for tomorrow’s wedding at St George’s Chapel at Windsor Castle Also spotted at Coworth Park was a delivery van leaving with a Singha Beer logo on the side. Prince Harry will stay at the hotel tonight with his brother Prince William, the Duke of Cambridge, before he weds Meghan in front of crowds of 100,000 people 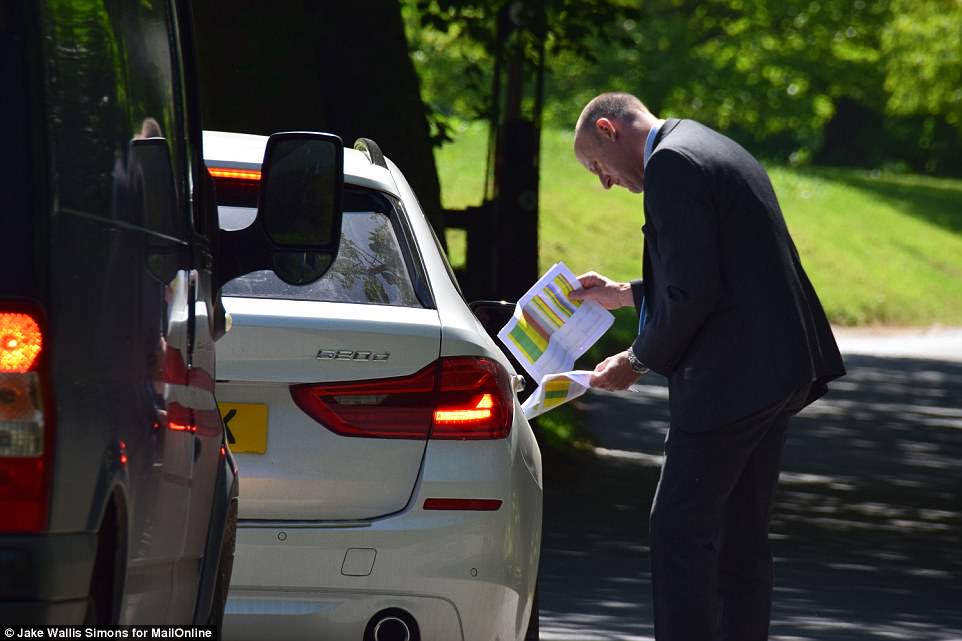 At Cliveden House, police vans guarded the multiple entrances to the estate, with officers riding golf buggies patrolling the entrance to the house.

The bridal party will have a wealth of options to spoil themselves at the lavish hotel, including two swimming pools, an afternoon tea room and even champagne boat trips on the nearby River Thames.

The hotel, which is set in 376 acres featuring a Japanese Water Garden and a Chinese pagoda, was built in 1666 and is adorned with antique and period features.

Its outdoor swimming pool is also notorious for the part it played in a scandal that rocked Britain.

The spot is where John Profumo met Christine Keeler and began an affair which almost brought down the government.

On the day of the wedding itself, crowds are expected to line the streets as Meghan and her mother embark on the short drive to St George’s Chapel where the nuptials will take place.

Prince Harry’s hotel is 17 miles away from Windsor Castle in equally indulgent surroundings. It is thought that the prince may choose the Dower house, a Grade II-listed private cottage in the grounds dating from 1775 which boasts its own charming river garden.

Another unusual feature is a swimming pool that plays music under water.