From drag queens to army vets: The unlikely Trumpists facing a backlash

Stephen Rowe is a black man who is tired of being called a white supremacist.

It’s a label he says he’s been given by “the left”, not because he actually believes that white people are the superior race, but because he happens to support Donald Trump. 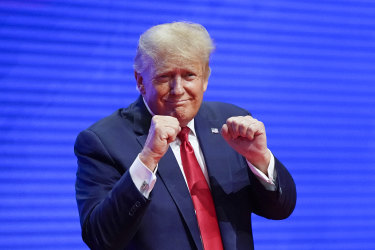 “I look at myself in the mirror and I don’t know how being called a white supremacist actually aligns,” he says, with a laugh.

“But it really does happen. I’ve also been called a race traitor, I’ve been called Uncle Tom (a black man considered to be servile to white people) and a whole bunch of other things that are too rude to say. It’s just something you have to get used to.”

Fifteen months after Trump lost the election, Rowe, 29, is emblematic of the former president’s ongoing popularity among voters from minority groups that many view as central to the Democrat’s broad coalition. 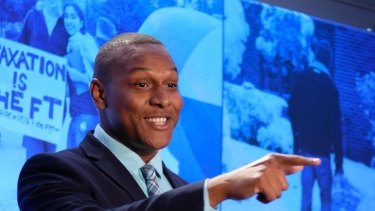 Trump supporter and proud conservative Stephen Rowe is trying to recruit more people from diverse backgrounds to climb the ranks of the movement.

For Rowe – who argues that “being a black conservative is not a contradiction, it’s a compliment” – this is too often taken for granted by Democrats.

While Joe Biden won the 2020 US election with about 80 million votes, Trump still achieved 74 million votes, partly by making significant inroads among Hispanic voters and by courting black voters and members of the LGBTQI community.

Rowe is a digital strategist for the Leadership Institute, which teaches conservatives how to run campaigns and engage in grassroots activism.

Now, as Trump hints at another presidential run in 2024, Rowe is trying to recruit more people from diverse backgrounds to climb the ranks of the movement.

Last week, at the annual gathering of the right-wing pageantry known as the Conservative Political Action Conference (CPAC), he led a panel discussion titled “Are You Ready To Be Called A Racist” for those who might be considering running for school boards, local councils, or state and federal office.

“I think we have a really exciting opportunity right now,” he says. “We’ve seen the debates over critical race theory, the pushback over vaccines and mask mandates, and the groundswell of support for Donald Trump. I certainly look forward to seeing him run.”

Barometer of the base

It’s a Sunday afternoon in Orlando, Florida, and a drag queen wearing a khaki dress, mustard boots and a rose tiara is traipsing down the hallway of the Rosen Shingle Creek Resort on the fourth and final day of CPAC.

“Are you from Australia?” Lady MAGA asks after hearing my accent. “I’m so sorry – it must break your heart what’s happened over there with all those COVID lockdowns. Australia used to be a beacon of freedom; now it’s practically Russia.“

Billed as the biggest gathering of conservatives in the world, CPAC has traditionally been a good barometer of the Republicans’ base and a presidential testing ground for would-be candidates to raise their profiles. 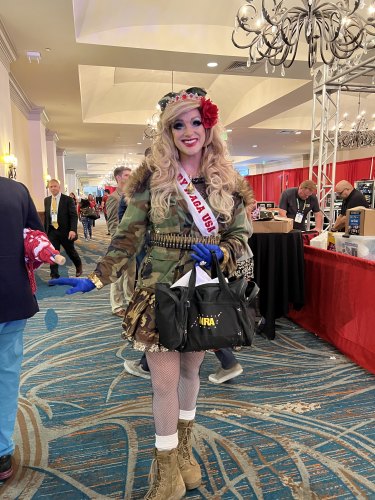 Trump fan: Lady MAGA is the Utah president of a group called the Log Cabin Republicans, which represents LGBTQI conservatives and allies.Credit:Farrah Tomazin

Every year, thousands of conservatives attend the event, paying between $300 to $3000 for a ticket, which allows them to rub shoulders with the who’s who of the Republican Party.

But while CPAC was once a platform for conservatives to discuss serious issues such as taxes or economic policy, nowadays, it feels more like a fringe festival to air cultural grievances.

This year – with the theme “Awake Not Woke” and panel discussions such as “The Moron In Chief”; “Fire Fauci” and “Lock Her Up, For Real” – it also felt like a Trumpist convention.

If the daily speeches were any guide, Republicans have clearly found their formula for November’s midterm elections. They will focus on culture wars, denounce “radical left ideology”, and be vocal at local school board debates, on everything from book banning to anti-racism.

“We are the party of inclusion, of diversity, of ideas!” Donald Trump jnr bellows from the stage.

Lady MAGA – the drag queen walking the hallways also known as Ryan Woods – is the Utah president of the Log Cabin Republicans, which represents LGBTQI conservatives and allies.

Once a closeted gay Mormon who voted for the Democrats, Woods turned to the Republicans because the party aligned with the two things he values most: freedom of speech and the Second Amendment right to own guns.

Last year, he was stood down from his job as a Delta flight attendant, after posting photos of people holding firearms, which reportedly violated the airline’s social media policies.

Woods says this wasn’t the first time he was “cancelled”.

For several years, Woods’ drag persona had been Ryanna Woods, inspired by the character Elle Woods from Legally Blonde. But in 2019, when he debuted Lady MAGA – an acronym for Trump’s campaign slogan “Make America Great Again” – his friends from Utah’s gay scene vanished.

“It’s so sad because these are the people who are supposed to be about love, tolerance and inclusion – yet at every single show, they would cuss President Trump,” he says. “For a while I didn’t say a word because I value freedom of speech. In the end I was excommunicated.” 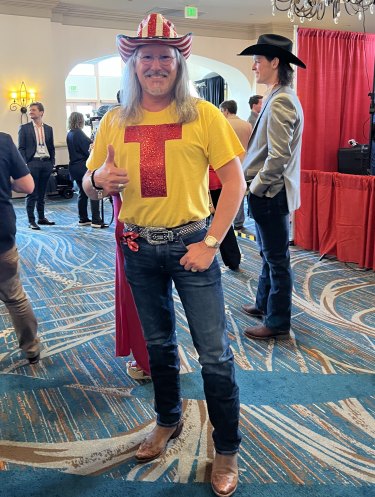 Texas small business owner Michael Manuel tells a similar story. A few years ago, no one from his community knew he was a Republican. He was drawn to Donald Trump because “he’s not a politician – he’s a businessman and he speaks what we’re thinking”.

That changed after the murder of George Floyd in May 2020, whose death under the knee of white police officer Derek Chauvin sparked protests across the US.

Manuel, who runs a women’s clothing boutique in Beaumont, about an hour east of Houston, started reposting videos of rioting and looting by extreme left-wing groups, and began speaking out against what was happening on Facebook.

“I ended up losing best friends, customers, and a lot of business,” he says.

“Me and my partner have been together for 32 years and we’ve lost all of our gay community friends because they’re all liberal. I still don’t know why Donald Trump is so bad – I’ve never heard him say anything bad about the gay community.”

Others might disagree. The Trump administration’s first term involved numerous policy rollbacks, from fighting LGBTQI workplace protections, to banning trans people from serving in the military.

In Manuel’s home state of Texas, Trump ally Governor Greg Abbott has issued an order that gender-affirming care should be considered as child abuse. And in Florida where CPAC was held last week, the Republican state legislature is debating a so-called “Don’t Say Gay” bill that will prohibit sexual orientation and gender identity in the state’s primary schools.

Manuel and Woods are nonetheless among a small but rarely discussed voting bloc: LGBTQI Republicans, some of whom seem prepared to overlook some of the party’s less than gay-friendly policies in favour of free-speech and parental rights.

According to a report by the 2020 Williams Institute, nearly nine million LGBTQI adults were registered to vote in the 2020 general election. Only 15 per cent were Republicans compared to 50 per cent Democrats.

Latinos, who represent around 32 million registered voters, according to the Pew Research Centre, are another interesting study in contrasts. At the 2020 election, Trump enjoyed an 8 per cent swing from this voting bloc- despite coming to office branding Mexican immigrants as rapists and drug dealers and vowing to build a “big, beautiful wall” along the US border.

Many agreed with his policies, drawn to the Republicans’ antisocialist narrative, religious conservatism on issues such as abortion, and its pro-business stance. 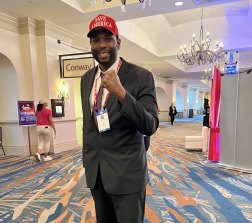 Professional boxer Donnie Palmer is so incensed by the “radical Left” he’s running for Congress in Boston.Credit:Farrah Tomazin

As for black voters, more than 30 million registered at the last election, and despite Biden’s occasional racial gaffes – including asking a black reporter if he’d smoked crack, or suggesting that African Americans “ain’t black” if they were considering voting for Trump – they backed him in record numbers.

Donnie Palmer, a former army veteran and teacher was not among them. He laments what he sees as “identity politics” by the left, which he believes is responsible for much of America’s divisions.

The professional boxer is so incensed by the “radical Left” he is running for Congress in Boston against Democrat Ayanna Pressley, a member of the party’s progressive “squad.”

“I prefer policies that unite and protect our community, rather than divide and destroy,” says Palmer.

Brenda Alvarez, who travelled from Long Island to see Trump speak at the conference, had similar views. 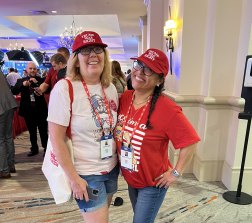 “We need to save our country”: Diane Lewis and Brenda Alvarez from Long Island at the conference.Credit:Farrah Tomazin

Sporting a red T-shirt with the words “I’m Still A Trump Girl”, Alvarez says she came to the US as a child with her parents from Ecuador for a better life. That’s why it upsets her when she hears people “bashing America”. “If they don’t like it, they should just leave,” she says. “Some people are out to destroy America. We need to save our country.”