From the Archives, 1960: Man rescued from 65-foot pylon hanging by a boot

A semi-conscious man hung by his boot from the lip of a bucket as he was hauled to the top of a 65-foot pylon shaft near Punt Road Bridge, Richmond, yesterday afternoon. 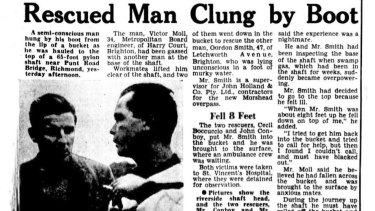 The man, Victor Moll, 34, Metropolitan Board engineer, of Harry Court, Brighton, had been gassed with another man at the base of the shaft.

Workmates lifted him clear of the shaft, and two of them went down in the bucket to rescue the other man, Gordon Smith, 47, of Letchworth Avenue, Brighton, who was lying unconscious in a foot of murky water.

The two rescuers, Cecil Boccuccio and John Conboy, put Mr Smith into the bucket and he was brought to the surface, where an ambulance crew was waiting.

Both victims were taken to St Vincent’s Hospital, where they were detained for observation.

At the hospital, Mr Moll said the experience was a nightmare.

He and Mr Smith had been inspecting the base of the shaft when swamp gas, which had been in the shaft for weeks, suddenly became overpowering.

Mr Smith had decided to go to the top because he felt ill.

“When Mr Smith was about eight feet up he fell down on top of me,” he added.

“I tried to get him back into the bucket and tried to call for help, but then I found I couldn’t call, and must have blacked out.”

Mr Moll said he believed he had fallen across the bucket and was brought to the surface by anxious mates.

During the journey up the shaft he must rolled off the bucket and caught his foot on the edge.