From the Archives, 1976: Smoke-bombs, knives at Sir John Kerr protest 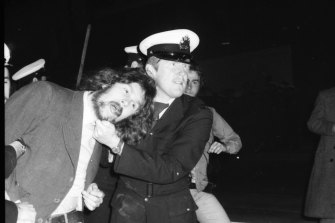 Police arrest one of the protesters. Credit:The Age Archives

Mounted police formed a wedge to force a path through the demonstrators for Sir John’s car.

Several people were trampled by the horses and two girls were injured during the wild scenes.

Twelve people were arrested and charged with street offences.

The Vice Regal car was damaged by a flying banner pole hurled by a young demonstrator.

Frenzied police horses fell against the side of the Rolls-Royce, kicking dents in the side panels. 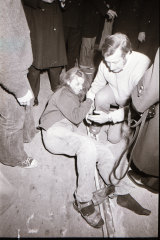 A protester knocked to the ground in the confrontation with police.Credit:The Age Archives

About 400 State and Commonwealth police, four brawler vans, dozens of squad cars and 12 mounted police were called out.

The police cordoned off streets around the Leonda Restaurant where Sir John was addressing the annual dinner of the Law Institute of Victoria.

Cars and taxis bringing guests to the dinner were kicked and pounded. About 30 were badly damaged.

As Sir John dined, demonstrators opposite the restaurant almost succeeded in a renewed bid to break through police lines.

A policeman was slightly injured as demonstrators wielding banner poles battled with police.

Demonstrators threw about 10 sulphur bombs over their heads. The bombs exploded under police horses, sending acrid orange smoke billowing across the street.

Other demonstrators hurled crackers and rolled marbles under the horses hooves.

One girl was taken to hospital after falling under a taxi carrying dinner guests. She was treated for an injured foot.

Another girl was treated for a sprained ankle when she fell under a police horse.

Last night’s demonstration was organised by the Victorian ALP Students Association but several other student bodies turned out.

Organisers accused police of overreacting but senior police denied this.

“Police have done what was required of them – nothing more nothing less,” he said. “It does not take many in a crowd to like this to cause trouble.

“Who can tell if the police horses incited the situation?”

More than 20 demonstrators wore black top hats made of cardboard.

A planned walkout by lawyers was called off when about 20 boycotted the dinner.