From the Archives, 1984: Army defuses doorstop crisis for bomb owner

Mr Jim Crump’s old bombshell — which his children sometimes rolled down the passage when he wasn’t using it as a doorstop —has turned out to be live. 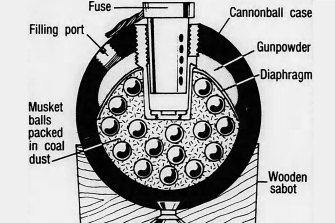 An illustration of the doorstop bomb.Credit:The Age Archives

It dates from August 1857, according to an inscription found by army technicians who managed to open it this week by remote control.

If you are sitting by the TV one night watching an old cavalry charge, you will see shells bursting overhead and horses going down all over the screen.

This type of shell had that effect. The length of its fuse determined the point at which it exploded. And when it did, it un-leashed musket balls at great force.

“This was the last design based on the round (and solid) cannonball before it changed its shape into a shell,” Major Joe Hastings, senior ammunition technical officer, said yesterday.

Old cannon used to fire two things, he said. One was the solid cannonball width would sometimes burst, usually in two, and go winging for a couple of hundred metres. The other was a jumble of metal fired point-blank at troops in a blunderbuss fashion.

The history of artillery changed when Lieutenant Henry Shrapnel (1711-1842) thought of putting the jumble of metal in a hollow ball and arranging for it blow up at the other end. It was he who invented the mixture of gunpowder and musket balls, used with great success in the Peninsula War and at Waterloo.

“The French hated it,” wrote one military historian, “because they could not reply to it… Shrapnel, in fact, had a great deal more to do with beating the French than he receives credit for.”

Shrapnel’s invention, however, was liable to explode accidentally or prematurely through friction, Major Hastings said.

Eventually, Captain E. M. Boxer, devised a shell in which the charge was enclosed in a tube and thus kept apart from the bullets, which were packed in coal dust.

In 1840 he improved on this by separating the bursting charge and the bullets with an iron diaphragm. It was this type of shell that Mr Crump, 78, kept in his home in Burke Road, Glen Iris, for 50 years.

“Somebody had a go at Mr Crump’s shell before we did,” Major Hastings said. “Whoever it was had removed some of the powder, but there was enough still left to make the shell function through a fire or a hard knock.”

Major Hastings’s team took almost two weeks to examine the shell, which Mr Crump thinks he found in his grandfather’s effects in Hobart in 1854. His grandfather had migrated from England in 1854.

X-rays proved fruitless, and the shell was sent to a country base with the instruction that nobody trying to open it was to be placed at risk.

Now that it has been made safe, the shell is being returned to Mr Crump.

“This was an exceptional case,” Major Hastings said. “We cannot offer this to everybody, but we did so this time because the Crump family seemed to doubt that there was any danger and were a little incredulous that we would take the normal course sad blow it up.”