From the Archives, 1994: NCA bombing jolts a street and scars a city

Blast jolts a street and scars a city

In the street lay 200 metres of wreckage – broken glass, pieces of office furniture and burnt paper. A telephone handset dangled from the charred window 12 floors above. 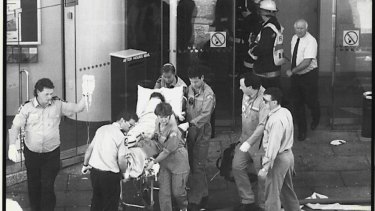 Ambulance workers take one of bombing victims out of the NCA building in Adelaide.

Flesh from the killed NCA officer’s body had landed in the shower of glass on the street below.

If there was a morning that Adelaide lost its innocence, this was it.

According to a bomb squad officer at the scene, the impact of the explosion would have been like a shotgun blast multiplied 100 times.

It blew out a 12-millimetre thick plate glass window. A witness said a straw hat had been catapulted out the window along with what appeared to be computer paper.

Adelaide City Council workers were among the first on the scene. To the horror of arriving police officers, the worker had begun sweeping up the shards of glass – potential evidence.

Within minutes, police had cordoned off almost 200 metres of Waymouth Street following a telephone call claiming another bomb was due to explode shortly after 11 am.

The street was evacuated as bomb squad personnel checked all 12 floors of the NCA building.

About 11 am the excited crowd of hundreds of people, mainly nearby office workers, heard a small explosion as the bomb squad imploded a suspected package. There was no second bomb.

The body of the NCA officer, Detective Sergeant Geoffrey Bowen, remained in the building for several hours waiting for the coroner’s van.

A severely injured lawyer, attached to the NCA for the past eight years, had been taken to the Royal Adelaide Hospital an hour after the blast. Three other people were also taken to hospital.

Early reports indicated that the parcel bomb had been delivered to the NCA office on Tuesday evening, but a scanning device used to monitor all mail and courier deliveries had not picked up the explosives.

The office where Detective Sergeant Bowen was opening his parcel was gutted. It is believed the other injured people were in the same room.

Detective Sergeant Bowen, 36, had been married with two young children.

An Adelaide fire officer, Mr Bill Dwyer, said the scene inside the building was “utter chaos”. “To do this damage it had been a sizeable explosion,” he said.

Waymouth Street is a normally busy thoroughfare. Police said that if the blast had occurred 15 to 20 minutes earlier, there would undoubtedly been civilian casualties from the large amount of glass falling.