From the Archives, 1997: Anthrax jumps safe cordon in Victoria

Victoria’s anthrax outbreak spread at the weekend, with more cattle dying and a new attack confirmed five kilometres outside the disease zone. 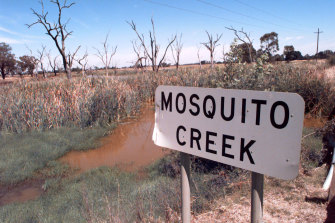 Mosquito creek runs through the middle of the Anthrax zone west of Tatura.Credit:Andrew De La Rue

A total of 105 cattle have now been killed on 52 properties in the Stanhope-Tatura region over the past three weeks. But it was the death of cattle at a farm five kilometres south-east of the main zone that caused the most anxiety yesterday.

Victoria’s chief veterinary officer, Dr Andrew Turner, said more than 21,000 cattle had been vaccinated on 209 properties, including farms in a ring around the isolated outbreak.

But the vaccine took between 10 and 14 days to become effective and there was little else farmers could do, he said.

“It’s a concern that the disease is behaving unusually. We usually get one property infected, and a few others, and with vaccinations it goes away,” he said. 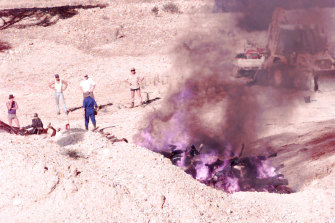 CFA and Dept of Agriculture watch the burning of anthrax infected cattle in an old quarry 17 km west of Tatura.Credit:Andrew De La Rue

While it is known that the disease is caused by contact with infectious microscopic spores on grass or in soil, it is not known how the spores were carried into the region or what activated them from their dormant state.

A spokesman for the Department of Natural Resources and Environment, Dr John Galvin, said: “It’s certainly the worst outbreak in terms of number of cattle lost for at least 50 or 60 years in Victoria.”

Anthrax could kill apparently healthy cattle in a couple of hours. It also could kill humans in three to four days after an incubation period, unless treatment was administered.

Dr Turner said agriculture department staff were working on the theory that the renewed outbreak coincided with hot, humid weather. Outbreaks dropped when overnight temperatures fell into the teens, but the return of hotter, humid conditions over the weekend brought further outbreaks.

Farmers say there is a climate of fear and anxiety in the community around Tatura. Yesterday, some said they had heard that cows were dying even though they were vaccinated nine days earlier.

There was no insurance and no other solution. Vaccinated cattle could not be moved off the property for six weeks and cows killed by anthrax sometimes took a day or more to be moved. All farmers could do was sit and wait.

“They came up the other day to pick up the latest carcase, but they couldn’t tell me what was going on,” one farmer said. “They said they weren’t giving out many details because there was too much speculation.”

Dr Turner said he understood farmers were frustrated. “Basically, we’ve got to keep plugging away with the vaccinations. We can’t go and spray paddocks with anything, or use some magic potion to solve it,” he said.