The FTSE 100 fell to a two-month low today as a chill ran through the market due to fears over high energy prices and inflation.

The blue-chip  index dropped 1.4% early before paring back some of the losses to reach 6,899 (-0.93%), helped by a 11% rise in British Airways owner IAG’s share price thanks to President Biden listing US travel restrictions for double-jabbed Brits.

The price of wholesale gas has surged by 250% since the beginning of the year and added 70% just since August as demand increases while the economy opens up, according to figures from Oil & Gas UK.

Energy stocks were also among top losers, with shares of heavyweights Royal Dutch Shell and BP falling 1.5 per cent and 0.9 per cent respectively this morning before recovering slightly in the afternoon.

Investors now await the BoE’s Bank of England’s meeting this week for a timeline on its plan to ease its massive pandemic stimulus against the backdrop of rising inflation pressures from supply chain disruptions and higher energy prices.

‘It is quite clear there is a growing sense of unease about the economic outlook as a growing number of companies look ahead to the prospect of rising costs, and the possible effects on their profit margins, at a time when central banks are coming under pressure to pull back on the generosity of their current stimulus measures,’ said Michael Hewson, chief market analyst at CMC Markets UK. 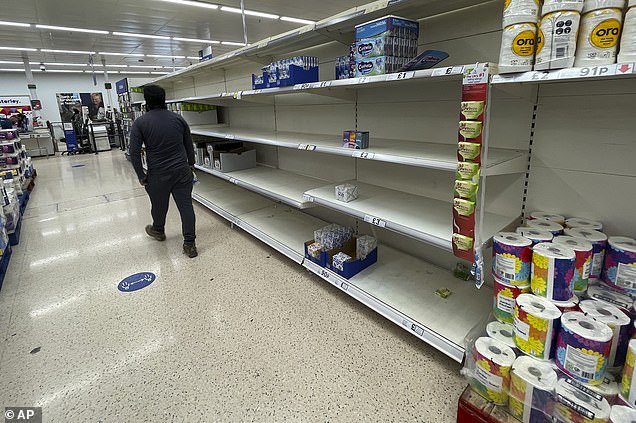 Empty shelves at a supermarket in London today. Gas shortages are set to add to the problems faced by food suppliers

The FTSE 100 is still on track to record gains for this year, but the pace of those gains have recently slowed after it fell for three straight weeks over concerns of rising costs and evidence of slowing economic growth.

Britain is considering offering state-backed loans to energy firms after wholesale gas prices soared, prompting big suppliers to ask for support from the government to cover the cost of taking on customers from companies that have gone bust.

The domestically-focused mid-cap index fell 1.1% with energy stocks among the top fallers.