This is the moment Extinction Rebellion activists were forcibly removed by furious Italian motorists after they blocked a busy motorway in Rome on Thursday.

Demonstrating over environmental issues, the protesters sat in a row across Rome’s Raccordo – the city’s main ring-road and one of its busiest – holding banners.

A video shot from the side of the two-lane road showed the demonstrators using road-block protest tactics also used in Britain, causing a huge traffic jam to snake back as far as the eye could see, with no police officers or vehicles in sight.

In response, irate Italian motorists at the front of the queue jumped out of their vehicles to take action – dragging the protesters across the tarmac and dumping them on to the side of the road. 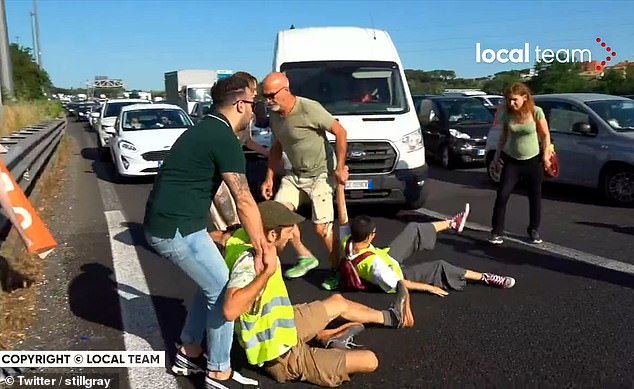 Pictured: This is the moment Extinction Rebellion activists were forcibly removed by furious motorists after they blocked a busy motorway in Rome on Thursday

One man ripped an orange banner from the hands of the Extinction Rebellion activists and threw it over the side of the motorway barrier. A woman, dressed in a summer dress while still carrying her handbag, tore a second sign from their grasp.

After removing the banners, a second man joined the first in forcibly dragging the protesters by their arms across the tarmac to the side of the road, making enough of a gap for several vehicles to get through and past the demonstration.

However, as the first man was dragging the remaining protesters off the road, the activists he had first removed saw an opportunity and ran back into the middle of the road, and in front of the on-coming traffic – only to sit down again with their banner. 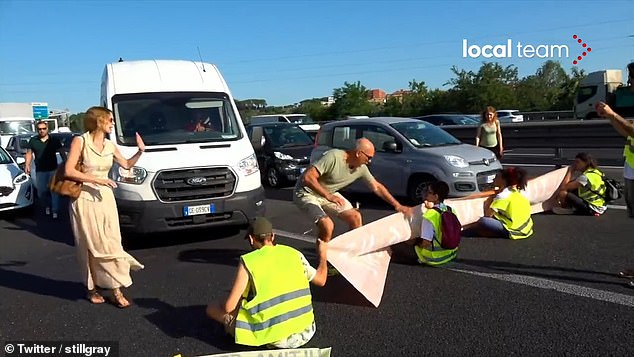 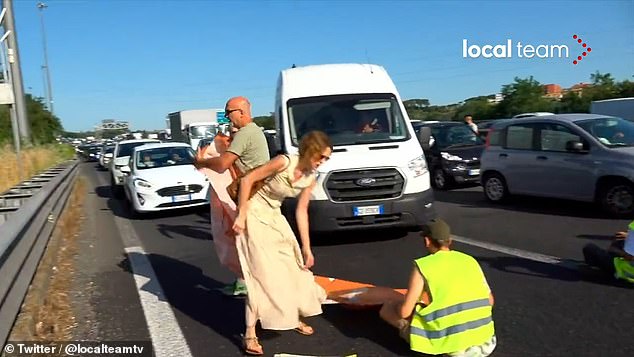 Pictured: Two motorists are shown ripping banners away from protesters in Rome on Thursday 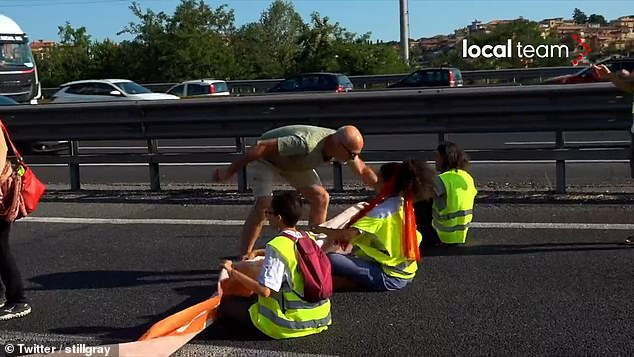 Pictured: A furious motorists is shown trying to snatch a banner away from a Extinction Rebellion protester sat in the middle of a busy motorway on Thursday 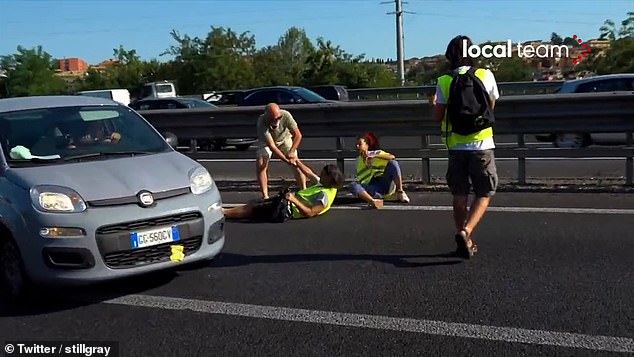 With no police in sight, Italian motorists were forced to take matters into their own hands and dragged the activists out of the road to allow for cars to pass

With the traffic again being blocked, the man grabbed one of the female protesters by the hair and dragged her again to the side of the road. This did not deter her, however, as she quickly shuffled back in front of the traffic.

According to Italian publication Corriere Dello Sport, the young protesters were part of an Extinction Rebellion off-shoot group called the ‘Last Generation’ campaign.

The group is calling for the end of all fossil fuel extraction projects, and is demanding that Italy does not restart its coal plants – and instead develop more wind and solar energy sources.

Britain has been grappling with similar protests in recent years, with Extinction Rebellion also wreaking havoc on public transport. Another group – Insulate Britain – have used the same road-block tactics as the activists in Italy. 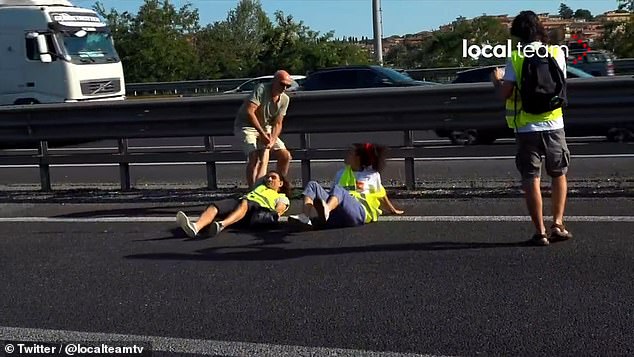 Pictured: A motorists is seen dragging an Extinction Rebellion protesters out of the road 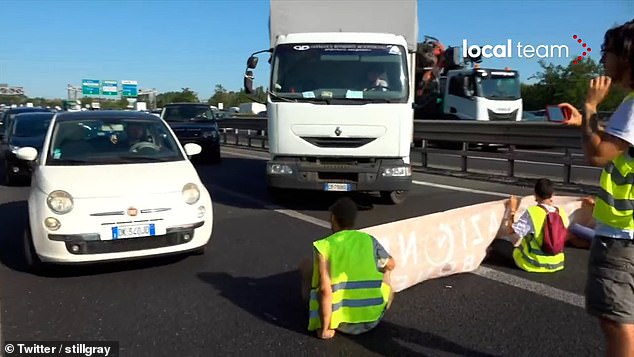 As some drivers made a break for the gap made by their fellow motorists, the protesters quickly moved back into position and blocked the road again 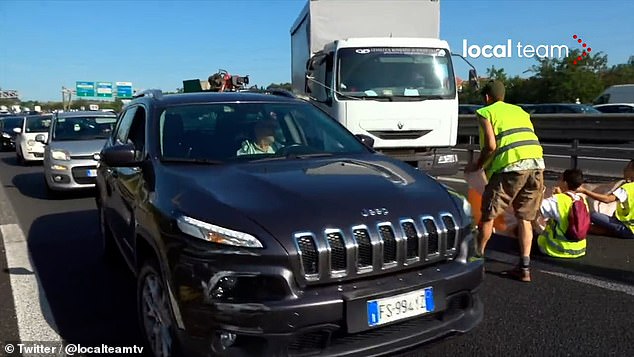 Some cars were able to get through the road-block, but after being removed the activists quickly shuffled back in front of the traffic, continuing to block the busy ring road 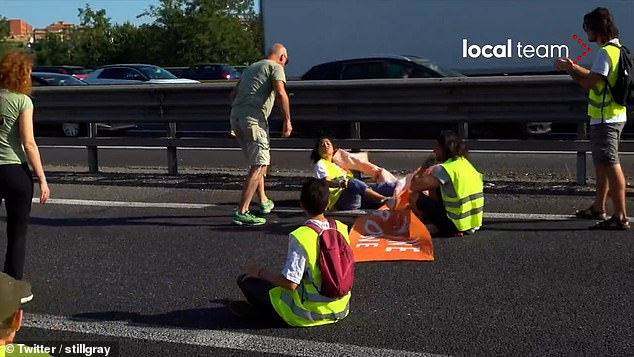 Pictured: The man who was most forceful in a video of the incident was shown dragging one of the protesters by her hair in order to get her out of the busy road

Legal action has been taken against the protesters, and injunctions have been taken out to deter activists with potential prison sentences.

The video showed the first man – wearing sunglasses, shorts and a T-Shirt – shouting in the face of the female activist who had sat back down in the middle of the road.

This time, he picked her up and threw her to the side of the road. In the meantime, the second man was able to make a gap in the activists long enough for more cars and trucks to drive through and away from the scene.

By the end of the video, however, the protesters are shown persisting with their efforts, blocking at least half of the road – again with their orange banner.

Corriere Dello Sport reported that the protest was eventually broke up with the arrival of local police, the Carabinieri (federal police) and the Digos (special forces) – with the protesters being taken into custody.