The G7 summit, summed up in one photo

There were hundreds, if not thousands, of photos taken at the Group of Seven summit in Quebec City this weekend, a two-day gathering of leaders from member states to discuss everything from climate change to international trade policy.

But one in particular stood out after it was published Saturday and ricocheted around the internet for its surreal composition. 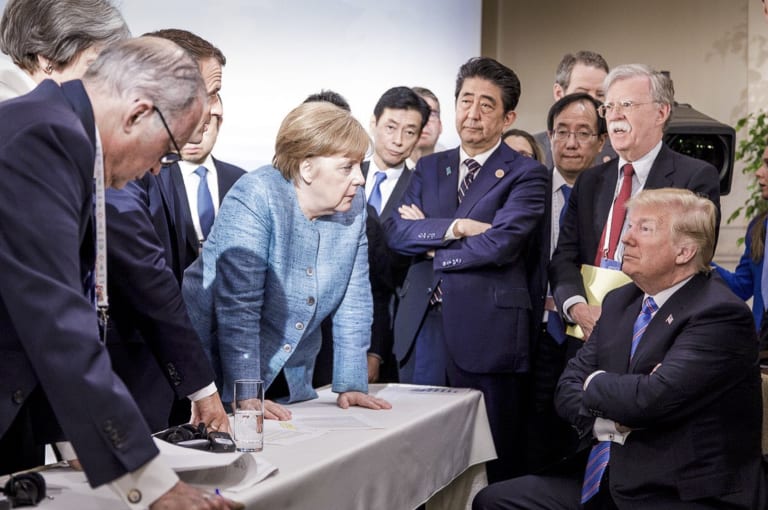 World leaders gather at the second day of the G-7 meeting in Charlevoix, Canada.

In the photo, German Chancellor Angela Merkel stands behind a long, narrow table, both hands pressed firmly into its surface atop some documents that are angled every which way. With as neutral an expression as possible, she stares directly at President Donald Trump, who sits on the other side of the divide.

Is he angry? Bored? Amused? Rare is the countenance where all three are equally plausible, but here it's difficult to say. Trump's eyes stare blankly ahead, focused in the direction of Merkel but not quite affixed upon the German chancellor. His arms are crossed in front of his chest, revealing below them only the length and wayward tendency of his tie.

Surrounding Merkel and Trump are a slew of other leaders, each with an unplaceable gaze. From his partially obscured side profile, one can only make out French President Emmanuel Macron's furrowed forehead. Japanese Prime Minister Shinzo Abe is fully visible in the frame but his thoughts remain just as inscrutable as the others', with his arms also crossed against his chest and his glance somewhere over Merkel's head.

To Abe's left stands US national security adviser John Bolton, the only one in the picture who looked as if he might have been in the middle of talking. If he was, though, no one appeared to be listening.

"Day two of the G-7 summit in Canada: spontaneous meeting between two working sessions," part of the German leader's caption stated in English.

It was a far cry from the official photos the White House had released of Trump's visit to the G7 Summit, which were mostly posed pictures or those that depicted Trump in a serious, commanding light. The disparity prompted some to wonder: Was Merkel – or someone on her staff – trolling the US President?

After all, during the summit, Trump had threatened to enact stiff penalties if other countries did not agree to dramatically reduce or end tariffs on American goods.

"Well, if they retaliate, they're making a mistake," Trump told reporters Saturday when asked about what might happen if those countries did not agree. "We're like the piggy bank that everybody is robbing. And that ends."

The day before, Trump had called for Russia to be reinstated to the group, despite its annexation of Ukraine's Crimea region four years ago, a stance that broke with the other leaders at the gathering. As The Washington Post's Damian Paletta, Anne Gearan and John Wagner reported Friday, Trump's demand got the G-7 summit off to an even rougher start:

"This annual gathering typically is meant to display a show of unity, but Trump has forced a more combative tone, with messy public feuds breaking out over trade disputes. Most of the foreign leaders at the summit had hoped to use the meeting to confront Trump about new tariffs he is imposing on imports, but instead found themselves reacting to Trump's Russia comments and bombastic Twitter posts.

"… Even before the Russia remarks, Trump had effectively upended this year's G-7 summit by raising the prospect of refusing to sign on to a joint statement with other leaders asserting commonly shared principles and values. And after French President Emmanuel Macron said the other six nations would be willing to move on without the United States, Trump criticized him and Canadian Prime Minister Justin Trudeau – threatening to impose new trade penalties and pull out of the North American Free Trade Agreement."

Some felt it was this power dynamic that Merkel's photo perfectly captured.

And meme it the people did. To many, the picture was something more than "a thousand words". It was art.

"It's got a [Norman] Rockwell quality to it," HuffPost congressional reporter Matt Fuller tweeted.

Fuller wasn't only one who saw echoes of one of America's preeminent early 20th-century painters and illustrators in the assortment of enigmatic facial expressions of a room full of the world's most powerful leaders.

As Trump's body language in the photo suggests, he may not have been thrilled to be there at all, as The Post's Paletta and Gearan reported on Saturday:

"He did not back away or blunt his critiques, and despite first-name references to "Angela" and "Justin," Trump did little to disguise his distrust of the international consensus model of world affairs that the G-7 represents.

"… Trump had grumbled to aides ahead of the meeting that he didn't want to go sit through lectures from the other leaders, and he mused about sending Vice President Mike Pence in his place.

"He arrived to the meeting late and left early, holding a solo news conference on Saturday morning where he gave the trade ultimatum and said the size of the U.S. economy means other nations can't win a trade war."

Trump delivered a parting shot hours after he had left the meeting, tweeting that he had directed US representative not to sign the joint communique that underscored trade rules after he was angered by remarks made at a news conference by Trudeau.