George Floyd protests spread across the UK: Crowds gather in Bristol, Portsmouth and are due in Birmingham after 15,000-strong London demo turned violent

Black Lives Matter activists are gearing up for another afternoon of protest in the UK following ugly clashes with police in London yesterday.

Demonstrations in Bristol, Birmingham and Portsmouth are riding momentum from yesterday’s mammoth gathering in the capital to keep alive the anger over the killing of African-American George Floyd.

Today’s protests in cities across the nation have so far appeared to avoid scuffles, with campaigners in Bristol instead displaying a powerful homage by lying on College Green face down – as if playing dead.

The placard-waving procession later swept through the streets while chanting. Unlike yesterday’s London protest, barely any police were pictured.

In Portsmouth, masses of people flocked to the Guildhall in the centre of the city for speeches by campaigners.

In recent days, global anti-racism protests have eclipsed the coverage of the coronavirus, but the pandemic still continued to cast a shadow over today’s rallies.

Many demonstrators covered their face with masks, while officers and local authorities pleaded with people to observe social distancing after crowds crammed tightly together in London caused alarm. 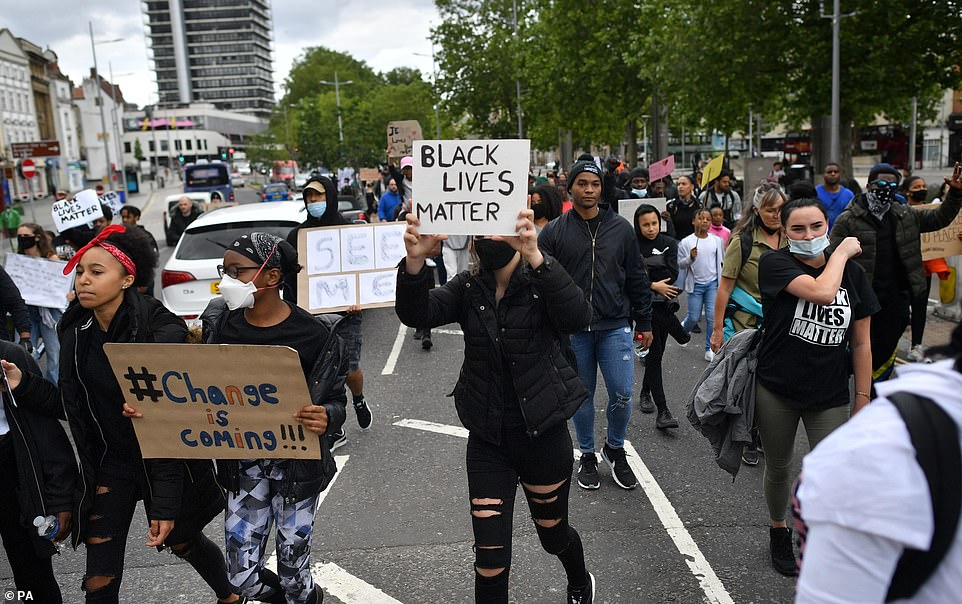 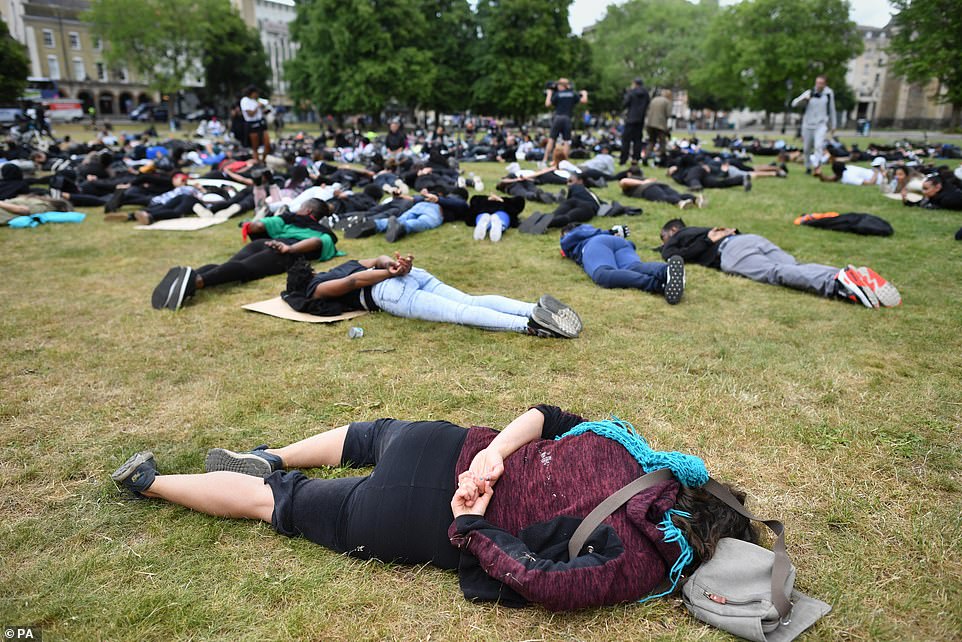 Today’s protests in cities across the nation have so far appeared to avoid scuffles, with campaigners in Bristol lying in face down – playing dead – in a powerful image 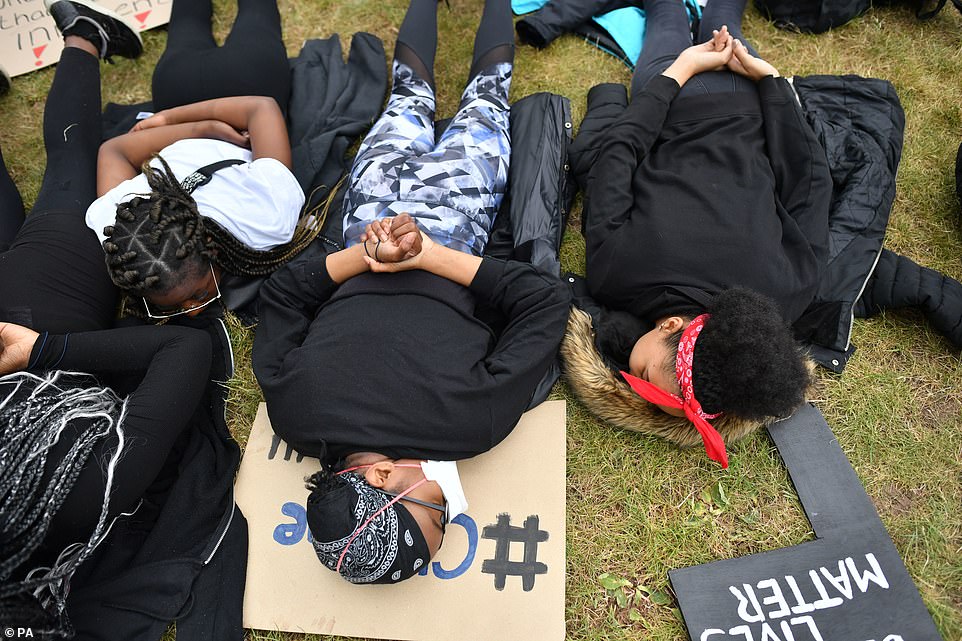 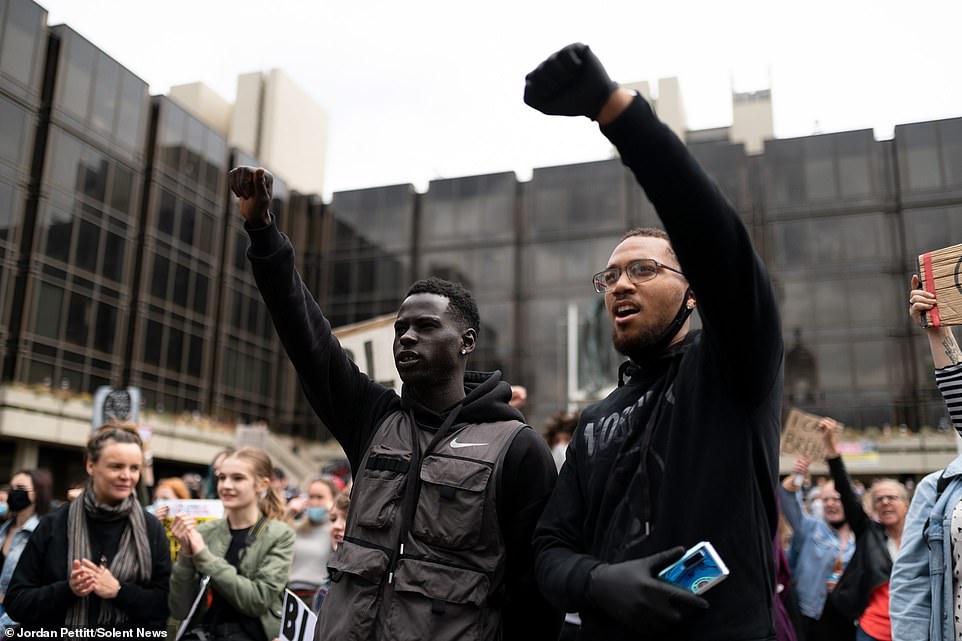 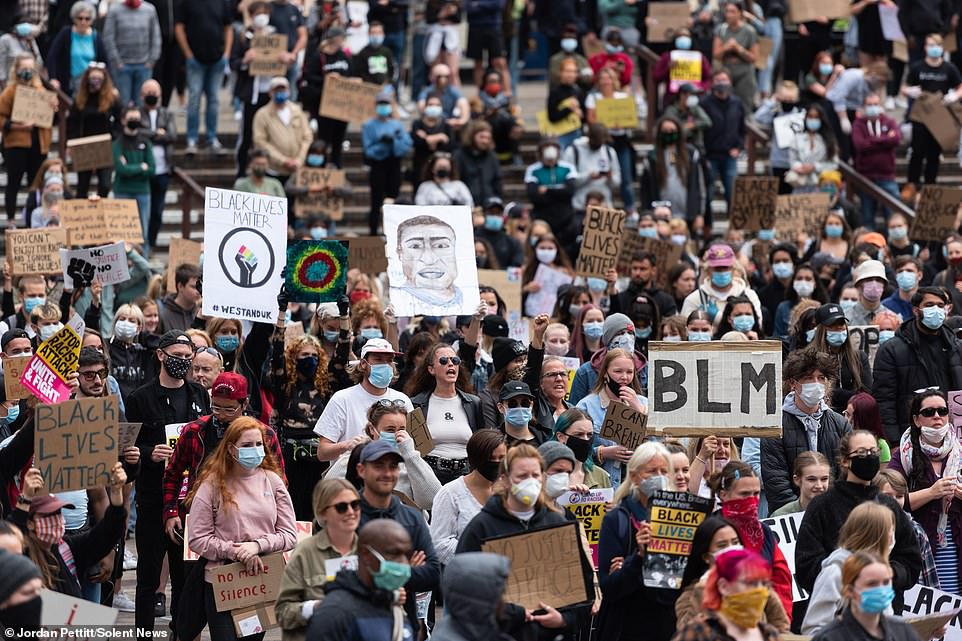 Hundreds of people flock to the Guidhall in Portsmouth, failing to maintain social distance, to voice anger over the killing of George Floyd

In Birmingham, where hundreds are expected to rally in Victoria Square from 4pm, West Midlands Police said ‘we recognise there will be lots of emotions by many people who feel moved by what they saw and want to express their frustrations’.

Assistant Chief Constable Matt Ward said: ‘Our aim is to allow and facilitate peaceful protest, and therefore we are not going to stop people coming out on to the streets if they’ve got legitimate concerns they want to share.

‘You can still protest while maintaining social distancing.’

Birmingham City Council has urged demonstrators to keep two metres apart ahead of a Black Lives Matter (BLM) demonstration in the city centre.

Birmingham City Council said it supports the BLM movement but urged protesters to keep two metres apart and stay in groups of six or fewer. 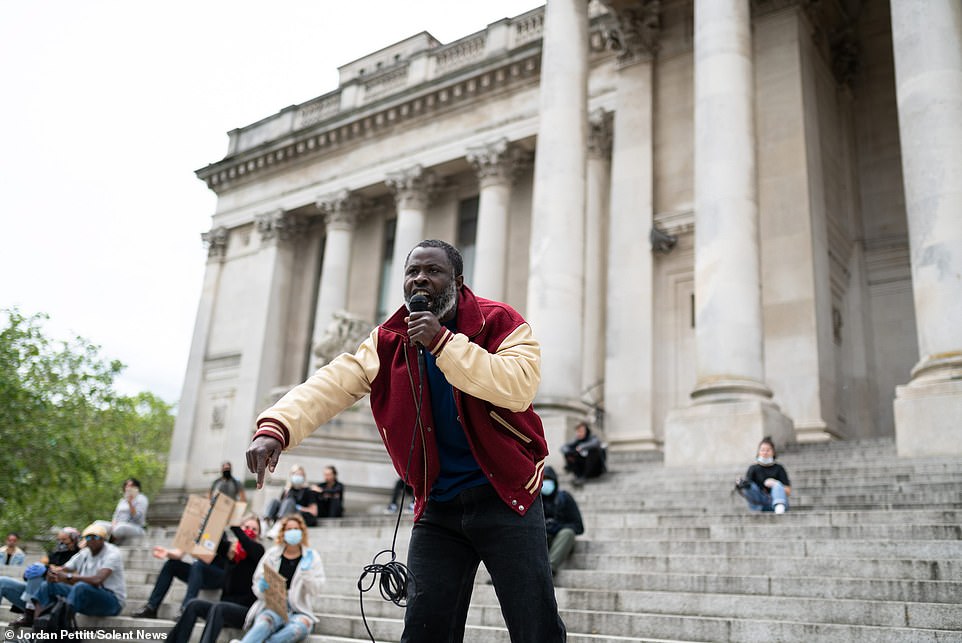 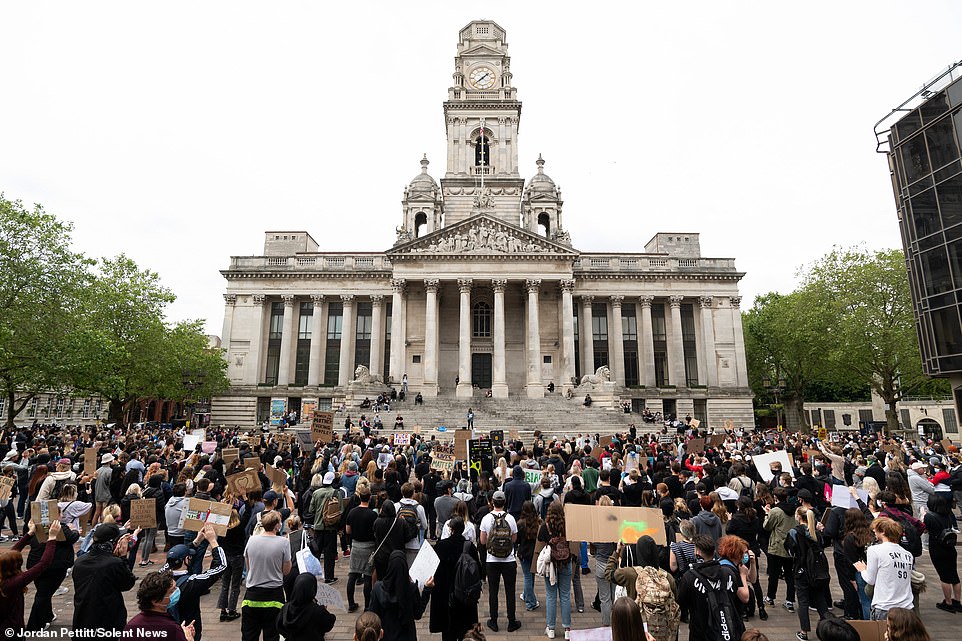 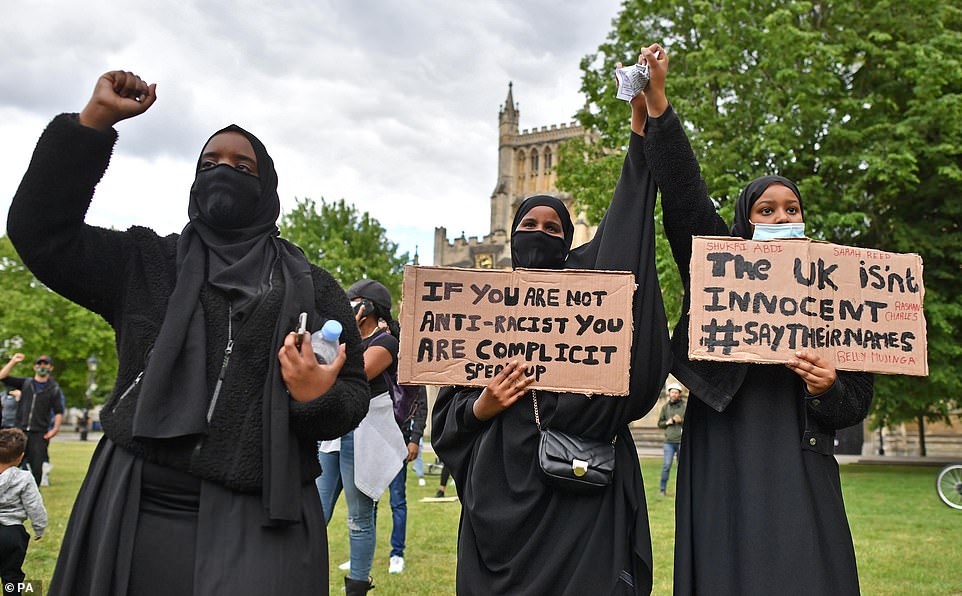 After a largely peaceful demonstration in Hyde Park in London on Wednesday, during which Star Wars actor John Boyega gave an impassioned speech, tensions later escalated outside Downing Street.

One officer was pushed to the ground in view of the Houses of Parliament, while another clip showed officers being forced down Whitehall by a group advancing towards them.

Other footage showed objects including signs and a traffic cone being thrown at officers, while plastic and glass bottles were also seen being launched in their direction.

The Metropolitan Police said 13 people were arrested during the protests, which ran into the early hours of Thursday morning.

One, Soofuu Yakr, 26, has been charged with assaulting Nine News Australia TV reporter Sophie Walsh and possessing cannabis and a screwdriver. He was due before magistrates on Thursday.

Ms Walsh was heard screaming on camera during her report and later tweeted she was ‘shaken but OK’; later, her colleague was filmed abandoning his live broadcast, fleeing as tensions flared up.

Scotland Yard said two men were arrested at Downing Street on suspicion of assaulting an emergency worker and violent disorder. 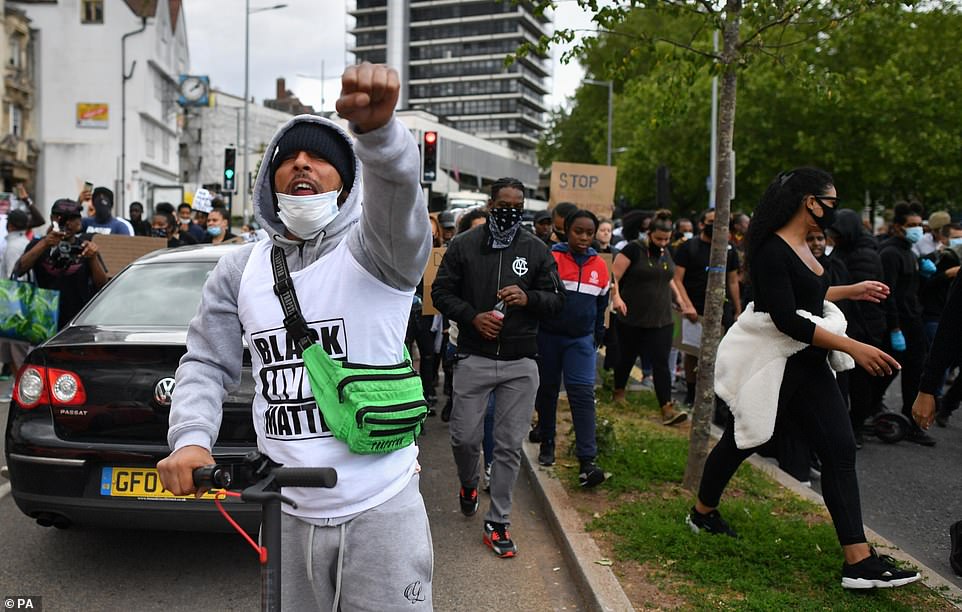 At one point, police escorted a man to the side of the road who was bleeding from the head, with blood over his clothes and camera.

Mr Floyd died after a white officer held him down by pressing a knee into his neck in Minneapolis on May 25, sparking days of protest in the US.

Prime Minister Boris Johnson said he was ‘appalled and sickened’ to see what happened to Mr Floyd, while chief constables from across the UK issued a joint statement saying they ‘stand alongside all those across the globe who are appalled and horrified’.

An online-only rally is due to take place this Sunday, campaign group Stand Up to Racism said, with speakers to discuss ‘how we turn the new wave of anger over racism and injustice into an effective movement for change’.

An online fundraiser for the UK chapter of the Black Lives Matter movement had reached more than £270,000 on Thursday morning, with the funds going to ‘support black life against institutional racism’.

Despite rumours circulating on social media that The Cenotaph had been vandalised during the protests, police said they were ‘not aware of any damage’.

In the US, protests began in Minneapolis where Mr Floyd died, and quickly spread across the country.

Some have included clashes between police and protesters, with officers recorded firing tear gas and rubber bullets on crowds.

US President Donald Trump has pressed state governors to take a more forceful approach against protesters.