Germany slashes growth forecast to just 2.6 per cent this year while Brexit Britain roars back with 6.5 per growth driven by rapid vaccine roll-out

The German economy will grow just 2.6 per cent this year as the country’s Covid recovery stumbles, forcing economists to slash their forecasts.

Economy Minister Peter Altmaier broke the bad news Wednesday, saying Germany will miss the 3.5 per cent forecast earlier this year due to supply chain issues that have slowed some industries to a crawl.

He spoke as UK Chancellor Rishi Sunak revealed Brexit Britain is on track to grow 6.5 per cent this year and return to pre-pandemic levels before 2022, three months earlier than Germany.

The UK is among the fastest-growing economies in the G7 thanks to a rapid pandemic recovery driven by its world-beating vaccine roll out.

Without Brexit, it is likely the UK would have been locked into Brussels’ vaccine programme which was slower to get going and meant the EU had to wait longer to lift virus restrictions holding its economy back. 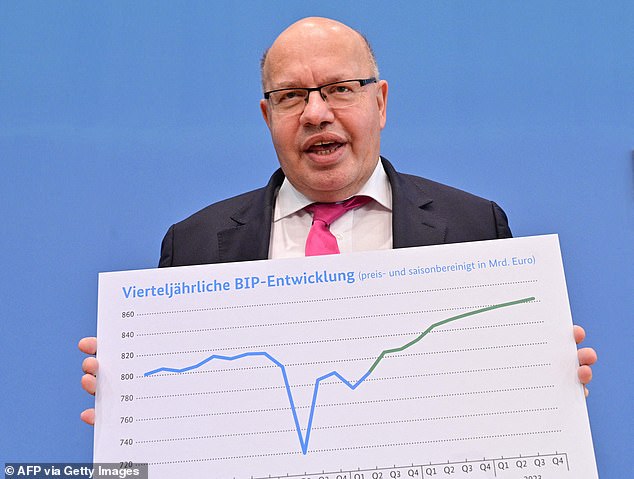 Peter Altmaier, the German economic minister, has downgraded growth forecasts to just 2.6 per cent this year – down from the 3.5 per cent that had been predicted

Mr Altmaier said he does not expect another Covid lockdown in Germany this winter, but added that rising case rates could still have ‘negative economic consequences’.

Economists from major think-tanks – including the OECD – have credited the UK’s rapid recovery to its vaccine progamme and economic reopening.

Meanwhile Europe’s slow-paced Covid recovery has hurt its economy, but Altmaier’s downgrade on Wednesday was not directly due to the pandemic.

Shortages of raw materials and components have combined with a gas shortage to slow down production lines and drive prices up, Mr Altmaier said.

Altmaier said the economic recovery will speed up next year – when the effect of lockdowns will have flushed out of the system – with growth of 4 per cent forecast.

That puts Germany on track to recover to pre-pandemic levels by the end of March 2022, three months later than scheduled.

By contrast, Britain will reach pre-pandemic levels by the year-end and will continue growing strongly next year – expanding by another 6 per cent.

The news a much-needed boost for the UK, which suffered one of the deepest Covid recessions of any major economy last year.

A whopping 9.8 per cent of GDP was erased in 2020, according to World Bank figures, while the German economy only slipped 4.9 per cent.

That is why, despite growing much faster than Germany’s economy, the UK’s is only set to get back into the black three months earlier.

Germany’s gloomy forecast comes against a backdrop of tough news for the country.

The German Ifo institute’s closely watched business climate indicator fell for the fourth consecutive month in October, according to figures published this week.

‘Supply problems are giving businesses headaches,’ Ifo president Clemens Fuest said in a statement, describing the bottlenecks as ‘sand in the wheels of the German economy’.

As supplies have dried up, costs have risen, with the prices faced by industry rising by 14.2 per cent year on year in September, a rate not seen since the 1970s.

Meanwhile, other indicators are turning downwards: German exports fell in August for the first time since April 2020, near the start of the pandemic.

Under pressure from ‘surprisingly long-lasting bottlenecks in components, raw materials and transport, more forecasts for the economy will be revised downwards’, said Ulrich Kater, chief economist at Deka Bank. 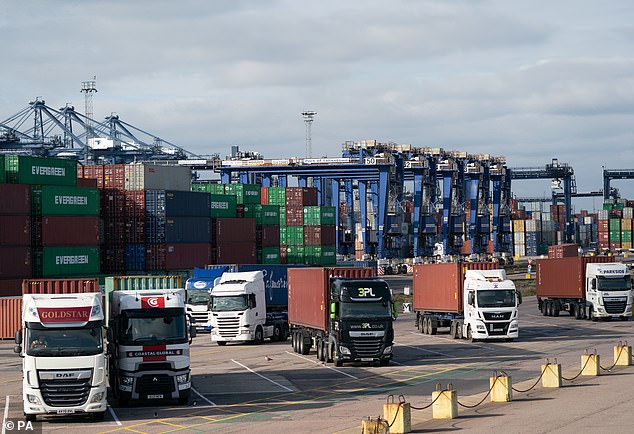 The question of how to get the economy rolling again will be at the top of the agenda as the parties seeking to form the next German government pick up talks on Wednesday.

In their initial agreement, the Social Democrats, Greens and Free Democrats (FDP) pledged massive investments and less red tape to prepare Germany for a greener and more digital future.

But they vowed not to introduce any tax hikes and to maintain Germany’s strict debt rule, which limits deficits to 0.35 percent of GDP in normal times, a red line for the FDP.

Finding a way to deliver on both will require ‘creativity’ by the parties’ own admission, and could see the new coalition house their investment programme somewhere else, such as public lender KfW, as per one mooted solution.

To avoid ‘choking off’ the recovery, the challenge over the next months – and likely for the next government – was to ‘reduce obstacles and burdens, speed processes up and put the emphasis on innovation’, Altmaier said at the press conference.