Singapore: Singapore’s top infectious disease expert warns that NSW and Victoria can learn from the city state’s troubles in opening up at 80 per cent vaccinated – by getting extra beds ready to ease pressure on hospitals as infection numbers spike.

Professor Dale Fisher, an Australian who chairs the WHO’s Global Outbreak Alert and Response Network, believes there are lessons to be learnt about the difficult transition to living with the virus. 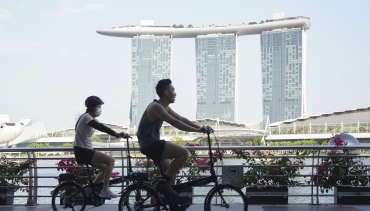 Cyclists ride past the Marina Bay Sands Hotel in Singapore, where curbs have been tightened this week.Credit:Bloomberg

Singapore, which opened restaurants, bars and gyms in mid-August before hitting the 80 per cent vaccination mark a month ago, tightened restrictions again this week as new daily cases skyrocketed to a record 1939, surpassing even Indonesia, whose new infections fell to a year-long low of 1760 on Sunday.

The number of seriously ill on the island remains low – there were two deaths on Monday while 194 people required oxygen and 27 were in intensive care – but the sheer speed of the rise in cases caught the government by surprise as it began shifting towards home recovery and community care for the mildly sick.

“We went from 100 to a 1000 in a very short space of time and that messaging wasn’t I guess uniformly received,” said Fisher, a physician based at the Yong Loo Lin School of Medicine at the National University of Singapore.

“Suddenly the hospitals were overwhelmed with people that didn’t need to be there for health reasons.“ 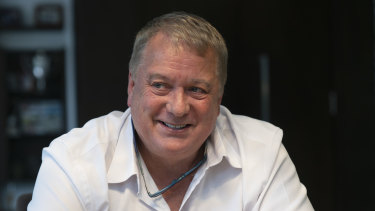 New infections dipped to 1647 on Monday but Singapore’s government has expressed concerns daily cases could rise beyond 3000 by next week and is planning for a scenario of as many as 5000 a day.

That involves a readiness for 300 ICU beds if needed and the introduction of new “stepped up” community care facilities for elderly COVID-19 patients who have underlying conditions but aren’t seriously ill.

However, the first of those new centres was only opened last week at a re-purposed nursing home. 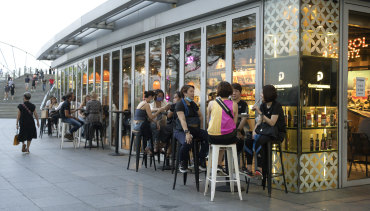 Singaporeans gather on the weekend before dining group limits were lowered to two people.Credit:Bloomberg

”If there is a lesson for NSW and Victoria, [it is] could this be a problem for you as numbers continue to increase as you ease restrictions?” Fisher said.

Singapore Finance Minister Lawrence Wong said the government had no choice but to ramp up restrictions for a month to avoid unnecessary deaths. They include winding back the number of people allowed to meet in public from five to two and a return to working from home and online schooling.

But indoor venues remain open for the fully vaccinated and the country hasn’t clamped down on international travel, which includes a quarantine-free travel lane from Germany and allows arrivals from some countries – including Australia – to quarantine at home for seven days.

While there is frustration at the latest setback, Wong maintains Singapore isn’t “going back to a scenario of low daily cases anymore”, with the government intent on treating the virus as an endemic disease.

Simon Hayes, an executive search recruiter for multinationals and local businesses in Singapore with Andrews Partnership, said there was an acceptance from businesses in the regional economic hub that “it was never going to be a straight path to normality”.

“The Singapore government made it very clear from the outset it was going to retain some options [to pull back] and that’s exactly what it’s done,” Hayes said.

“The reaction from large businesses has been fairly sanguine. It’s something they realised was going to be a possibility. I think there’s confidence in the Singapore government in the long run, that the government has a plan, that it’s following the plan and it might take a while, but we’ll get there.”