Ghost town Britain: Commuting city workers shun the office as new lockdown is announced but some Tube and train carriages are still busy with builders and cafe workers who can’t work from home

Office staff largely worked from home today as Britain’s third national lockdown began to clamp shut, but tradesmen, key workers and essential businesses continued to travel in to their jobs.

Prime Minister Boris Johnson said last night the restrictions, which will come in tomorrow, would allow the virus to be contained and the NHS protected.

His call to arms was largely obeyed by city staff who stayed away from travel, but people including builders and cafe workers still journeyed to their work as permitted under the new rules.

It came despite big business including Amazon, Goldman Sachs and the London Stock Exchange to stay home unless they were essential staff. 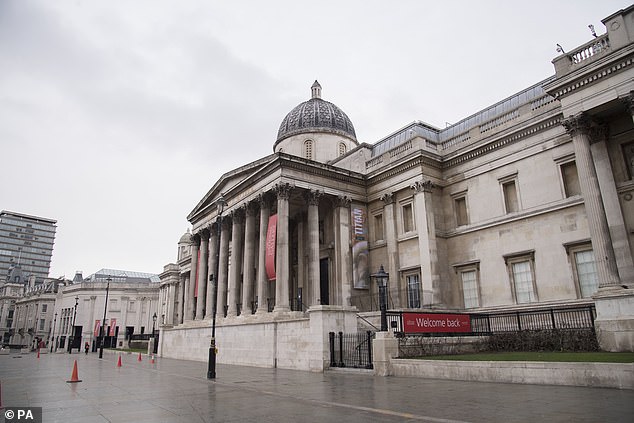 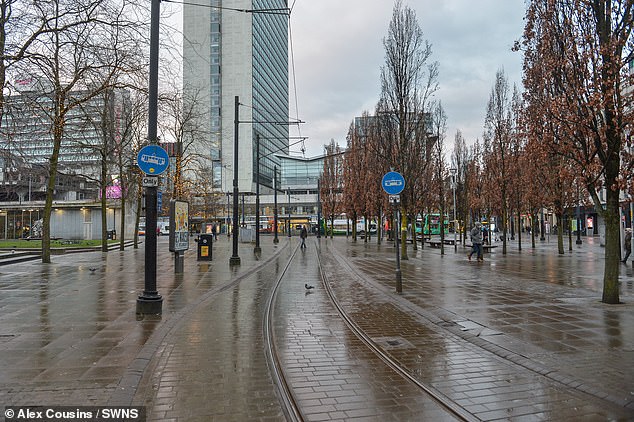 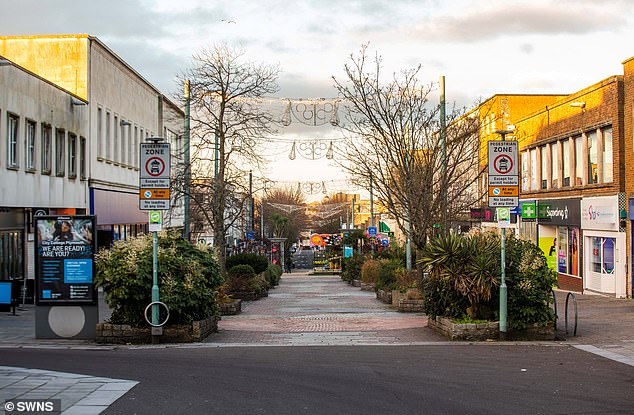 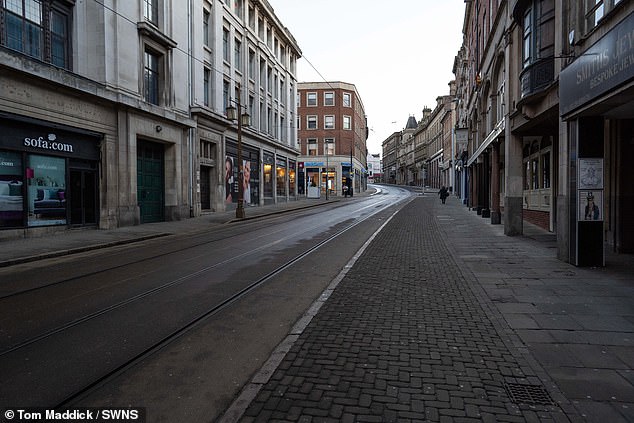 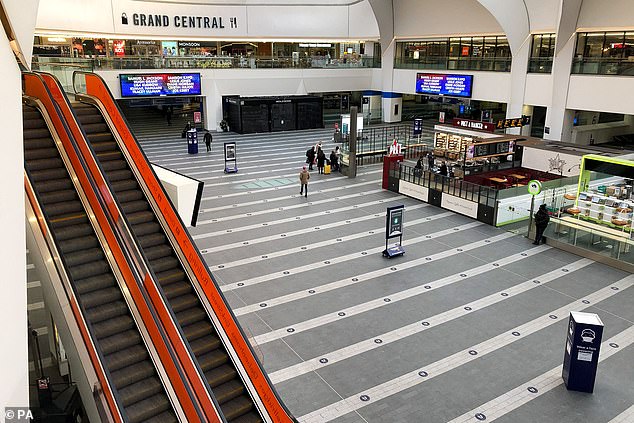 New Street train station in Birmingham at 8.47am the morning today after the PM’s address 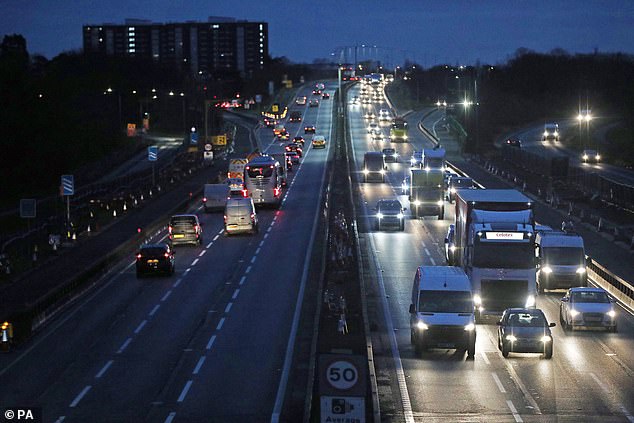 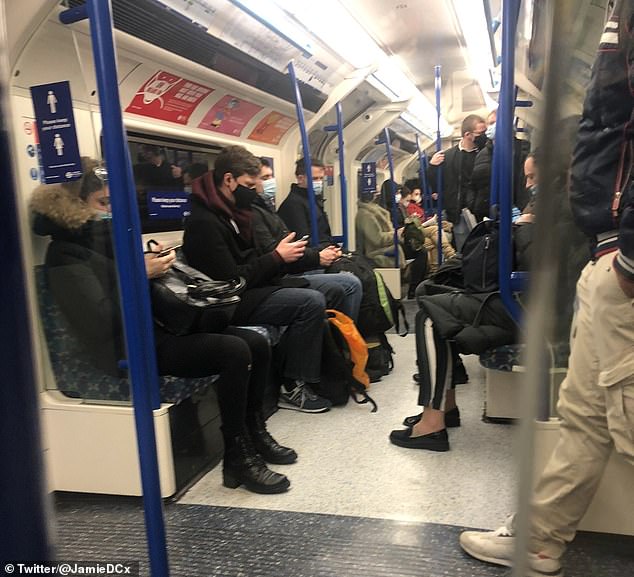 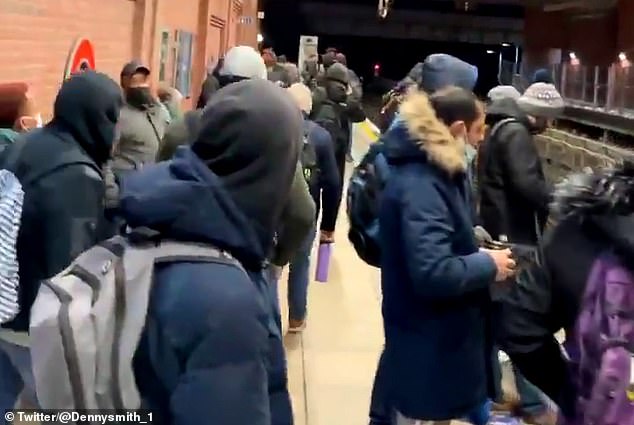 Staff at the world-famous London Stock Exchange were mostly working at home, with just a small key team allowed into offices.

It was the same with other big firms, including Standard Chartered, with those who can work at home doing so.

Goldman Sachs staff in Europe, the Middle East and Africa were all told last night by memo only key members should come in.

It said: ‘In the UK, until further notice, we will continue with our in-office essential approach announced in December.

‘Across the broader EMEA region, the challenges are similar with new local lockdowns continuing into January in many countries.

‘This will necessitate ongoing caution and flexibility from all of us.’ 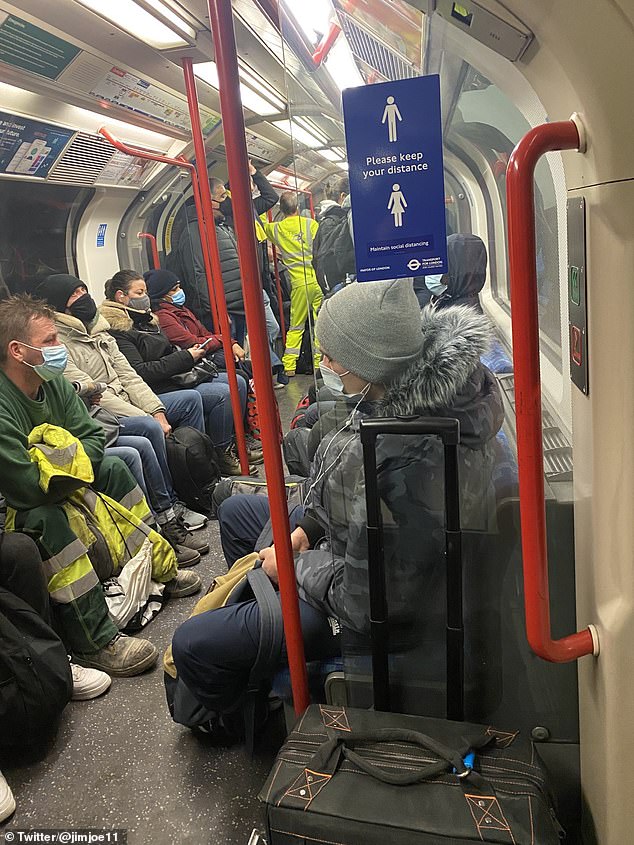 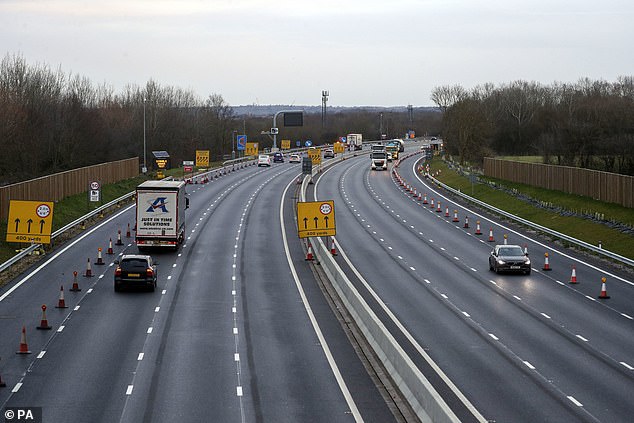 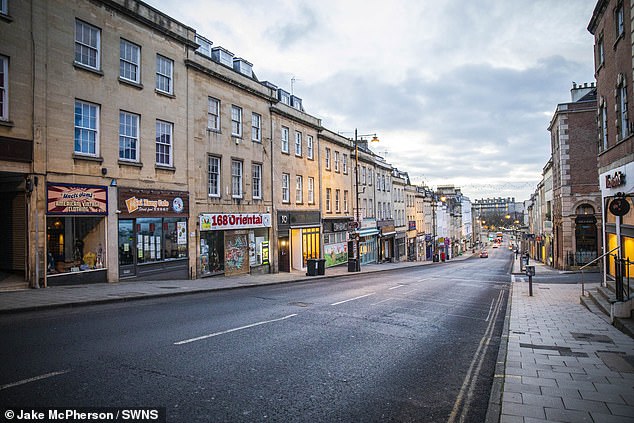 The new lockdown in England at a glance

The guidance is for people who are fit and well.

There is additional advice for people who are clinically extremely vulnerable to coronavirus and households with a possible or confirmed coronavirus infection.

They should not attend work, school, college or university, and limit the time you spend outside the home.  The guidance says you should only go out for medical appointments, exercise or if it is essential.

The rules for all people in England also state:

Amazon have also told staff across the world as long as they can do their jobs from home they are welcome to do so until June 30.

The Prime Minister plunged England into a national lockdown described by some as more brutal than last March on Monday in a desperate bid to keep the mutant coronavirus at bay while vaccines are rolled out.

Just a day after he urged parents to send their children back, the PM declared in a sombre address from No10 that primary and secondary schools will be shut from today until at least February half-term, with only the vulnerable and offspring of key workers allowed to go in.

University students are being told to stay at home and study remotely, while exams will not go ahead as planned. Nurseries can stay open.

Under the the new guidance, published overnight, non-essential retail, all hospitality, gyms and swimming pools will be ordered to close across the country.

Vulnerable people are being told to shield where possible. Communal worship can continue with social distancing in place.

The public will once again only be allowed to leave home for one of five reasons.

They are to go to work if essential, shop for necessities, exercise – allowed with one other person from another household, care for someone, or to seek medical help.

Those who break the rules face a £200 for the first offence, doubling for further offences up to a maximum of £6,400.

The extraordinary third national squeeze will come into effect in the early hours of Wednesday after the regulations are laid today, but Mr Johnson urged the public to adopt the new rules now.

MPs will get a vote on them on Wednesday when Parliament is recalled, although there is no prospect of them being defeated.

With his hands clasped together and seated behind a desk in Downing Street, Mr Johnson made clear there is no chance of them being lifted for at least seven weeks – and possibly longer if the vaccine rollout does not go well.

‘Our hospitals are under more pressure than at any time since the start of the pandemic.

‘It’s clear we need to do more.. while our vaccines are rolled out,’ he said.

He said it would not be ‘possible or fair’ for exams to go ahead this summer as normal.

‘The weeks ahead will be the hardest but I really do believe that we are reaching the end of the struggle,’ he said.

The PM pledged that by mid-February the top four categories on the vaccine distribution list will have had their first jabs.

There are 13.2million people in the top four groups on the vaccination list – care home residents and the over-80s, frontline healthcare workers, the over-70s and the clinically vulnerable.