The founder of a global coalition of MPs is pushing for the International Olympic Committee to reconsider Beijing's hosting of the 2022 Winter Games as politicians around the world voice increasing concerns over China's human rights record.

The move paves the way for a worldwide alliance between human rights groups and conservative and progressive politicians to force a boycott of the Games. The development also could further threaten the finances of the IOC as it battles to keep the coronavirus-stricken Tokyo Olympics on track for 2021. 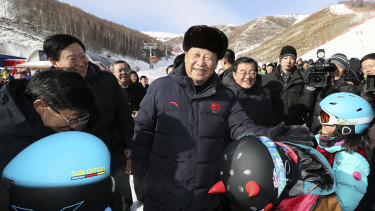 British MP Sir Iain Duncan Smith, co-chair of the Inter-Parliamentary Alliance on China and former leader of the Conservative Party in Britain, said: "I have asked that the IOC thinks again about hosting in China."

Sir Iain said it was time for broader economic restrictions on China and that other national governments "should be much more supportive of Australia", which had been made "a scapegoat" over its calls for an independent inquiry into the coronavirus pandemic.

"The free world does have a strong position to say the bullying, the threatening, the internal repression, the border disputes, the arrogant attitude to your neighbours, the breaking of the treaty with Hong Kong — these must have consequences," he said. "At the moment the Chinese believe these consequences are no more than just condemnation." 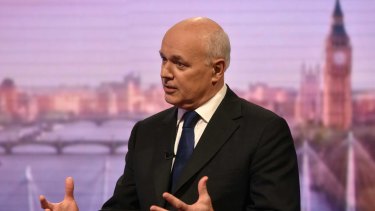 British MP Iain Duncan Smith says the Chinese government must know that their actions have consequences.Credit:Getty

Sir Iain's stance follows 160 human rights advocacy groups delivering a joint letter to the chief of the International Olympic Committee calling for Beijing to stripped of the Games over its crackdown on the pro-democracy movement in Hong Kong and detention of Uighurs in Xinjiang.

Further questions have been raised about how the world's media can cover the Olympics after a widespread crackdown against western outlets. Australian reporters Mike Smith and Bill Birtles were forced to leave China in September and other correspondents have struggled to obtain accreditation to enter the country.

Independent Australian MP Zali Steggall, a bronze medal winner in alpine skiing at the Nagano Olympic Games in 1998, said while the Olympics were a matter for the IOC, it needed to be "monitoring the unfolding situation" in China.

"I have been concerned about the allegations of serious human rights abuses and the recent shutting down of free speech in China," said Steggall, who has no association with the inter-parliamentary alliance. 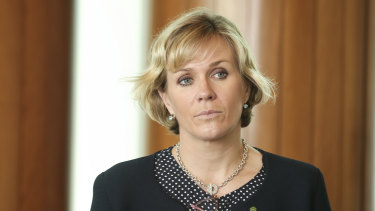 The chair of New Zealand's Foreign Affairs Committee Simon O'Connor said his country would act cautiously but the "Olympics could be a catalyst" for greater global pressure on China's actions.

"It doesn't matter if it is Hong Kong, Uighurs, Taiwan or the stealing of technology," he said. "This is not a very good mix at the moment and it's hard to see in a years time what is going to make that improved."

"I would say sport is something that unites us, but it is very strange that [the Dutch] King and Queen might be applauding in Beijing in 2022 while knowing there are 1 million Uighurs in punishment camps and Hong Kong is captured by China."

Beijing will be the last Olympics exempt from human rights principles being incorporated in its host city contract by the IOC, which will bind hosts to UN conventions from Paris 2024 onwards.

The Chinese government has been ramping up its multibillion-dollar infrastructure building ahead of the games, adding a ski jumping centre, a speed skating stadium and a new 1.3 million square metre convention centre.

President Xi has urged China's population to take up winter sports ahead of the Games in a country that has historically had limited alpine participation.

China's Ministry of Foreign Affairs rejected the accusations from the 160 human rights groups on September 9 that it had violated human rights in Xinjiang or Hong Kong.

"The groundless allegations of these organisations are not worth refuting," said foreign affairs spokesman Zhao Lijian."Attempts to politicise sports run counter to the spirit of the Olympic Charter. China firmly opposes them."

In July, IOC member Dick Pound raised the possibility of cancelling the Beijing Games if coronavirus forced them into abandoning the Tokyo Games.

"Taking the political side out of it for the moment say there is a COVID problem in July and August next year in Tokyo, it is hard to imagine there is not going to be a knock-on effect in the same area five months later," he said.

The IOC, which is already expecting to bear a $1.2 billion cost-blowout for the delayed Tokyo Olympics, was contacted for comment.

The Olympics have long triggered human rights flashpoints. Berlin in 1936 was used as a showcase for Nazi propaganda. Prior to the 1968 games in Mexico, hundreds of demonstrating students were killed less than two weeks before the opening ceremony. The Munich games in 1972 saw Israeli athletes taken hostage and murdered by Palestinian militants. Beijing's summer Olympics in 2008 saw mounting concerns over crackdowns on dissidents and political suppression in Tibet.

The Sochi Winter Olympics in Russia in 2014 also were marred by the exploitation of migrant workers and threats against journalists and activists who had documented environmental damage caused by the Games.

Athletes have participated under the Olympic flag in the past as independent competitors when sanctions have been applied to particular countries.

Norwegian Liberal Party leader Trine Skei Grande said that Beijing's internment of political prisoners, destroying the rule of law in Hong Kong, lack of free speech and democratic accountability "reflect the paranoia of an unelected regime, insecure in its position and threatened by dissent".

However, the alliance member she said the Olympics should be an opportunity for a discussion about human rights. "I don't think human rights will improve from countries deciding not to partake in the Olympics," she said.

China's Ministry of Foreign Affairs was contacted for comment.