Politics can be brutal. But rarely has this been as obvious as during West Australian Labor Premier Mark McGowan’s decimation of the Liberal and National parties at the polls last weekend. Mr McGowan shattered political records, delivering his party an expected 52 of 59 seats, reducing the Liberals to a likely three seats and the Nationals four.

In a further humiliation, the Liberals, once a dominant force in the west, will be compelled to hand over the role of opposition leader to the head of the Nationals, Mia Davies, after failing to garner enough seats. 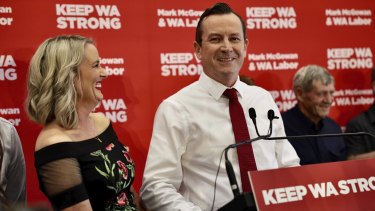 While there is some talk of the two opposition parties – who once shared power – coming together again, even as a joint force they would fail to reach double digits in the lower house. And with Labor also predicted to form a majority in the upper house, it all but crushes any opposition Mr McGowan will face for the next four years.

To have such overwhelming electoral support is an enviable position for any government, but when it translates into such a lopsided parliament, it raises concerns for democracy. Checks and balances on the use of power are written into every democratic constitution for good reason. Unfettered control over the legislative process has rarely been a recipe for longevity in power or good governance.

Ask former prime minister John Howard, who in his fourth and final term finally gained control of both houses of parliament, only for it to be his downfall after pushing through the unpopular “Workchoices” laws on industrial relations.

Enforcing scrutiny and compromise in the legislative process provides a level of accountability and transparency that is not possible when there is not sufficient MPs sitting opposite the government. That is now the case in Western Australia.

And how can so few Liberal and National MPs be expected not only to ensure they keep a watchful eye on the government, but also develop policies, an essential role in building credibility as an alternative government?

Regrettably, Western Australia is hardly alone in facing such a scenario.

In NSW, polling is showing that Labor’s opposition leader, Jodi McKay, would lose her own seat and the party would suffer its worst primary vote in almost 120 years if a state election were held now. The poll predicts Labor’s primary vote has crashed to 23.9 per cent, a figure lower than the landslide loss of 2011 under former premier Kristina Keneally and the lowest recorded by NSW Labor since 1904.

And in Victoria, Liberal opposition leader Michael O’Brien is fending off an imminent spill of his position as his party looks to act on its fears that the party could face a wipe-out of similar scale to Western Australia when the state goes to the polls next year.

There is little doubt that the prominent role state governments have had to play in managing the pandemic has boosted their electoral support no matter whether Liberal or Labor. Even in Victoria, which had to endure long lockdowns after the state’s hotel quarantine was bungled, Premier Daniel Andrews has maintained strong support.

But such support places further responsibility on these governments to ensure that they do not interpret such backing from voters as a green light to ignore criticism and opposing views. Good policy, good governance, good accountability and transparency all rely on scrutiny that is often led by an opposition. It may be the worst job in politics, but without it democracy would falter.