GOP senator: ‘I will step in’ if Biden doesn’t start receiving intel briefings

Washington: Several Senate Republicans have broken with the Trump administration to argue that President-elect Joe Biden should get access to classified intelligence briefings, even though the president continues to contest the election results.

Senator James Lankford, an Oklahoma Republican, said he will intervene if the Trump administration doesn't start allowing Biden to receive the daily intelligence briefings by Friday. 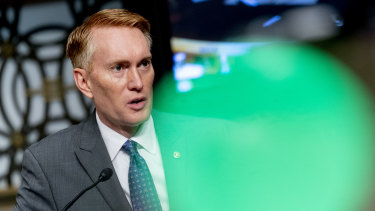 Incoming presidents typically have access to those assessments during the transition, so they can be prepared to deal with any national security threats on day one.

"This needs to occur so that regardless of the outcome of the election, whichever way that it goes, people can be ready for that actual task," Lankford told Tulsa radio station KRMG on Wednesday.

"If that's not occurring by Friday, I will step in," said Lankford, who sits on the Senate Homeland Security and Governmental Affairs Committee.

Senator Chuck Grassley, Republican-Iowa, also said Biden should get the briefings when asked about the matter by a CNN reporter on Thursday. 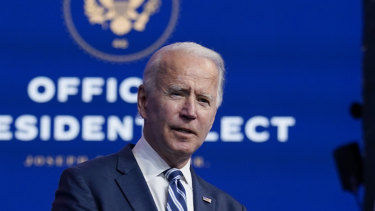 "I would think – especially on classified briefings – the answer is yes," Grassley said.

Senator Ron Johnson, chairman of the homeland security committee, also told reporters he would have "no problem" with Biden receiving the briefings.

The GOP shift comes amid a broader, behind-the-scenes tussle between the president and Senate Republicans over the fate of CIA Director Gina Haspel. Trump's allies are reportedly pushing for Haspel's ouster, while Senate Republicans have come to her defence.

Trump has long distrusted and derided the intelligence community. On Tuesday, Arthur Schwartz, a New York public relations consultant who is close to Donald Trump jnr, accused Haspel of undermining the president, though he did not specify how.

"Why the hell are Republican senators trying to manipulate @realDonaldTrump into keeping Gina Haspel, who undermines Trump and subverts his agenda at every turn?" Schwartz tweeted.

He singled out three high-ranking GOP senators – John Cornyn of Texas, Marco Rubio of Florida, and Senate Majority Leader Mitch McConnell of Kentucky – and said they were "getting played by a master case officer."

Senator Angus King, an independent from Maine who caucuses with the Democrats, said the Haspel fight appears to be related to a push by Trump and his allies to declassify intelligence they believe would undercut the conclusion that Russia interfered in the 2016 election to boost Trump's campaign against Democrat Hillary Clinton. Haspel is resisting that for fear it would expose vital US intelligence secrets.

"The president wants to release information that would compromise sources and methods" to serve his own political interests, said King, who sits on the intelligence panel.

"This is serious business on two levels," he said. "It could very easily compromise our ability to obtain information and intelligence, which is critical. And it could endanger people's lives."

McConnell met with Haspel in his Capitol Hill office on Tuesday, an unusual private session that drew the attention of reporters. They both declined to say what the meeting was about, but McConnell is a strong backer of Haspel and may have been signalling his opposition to her ouster.

Cornyn, who sits on the Senate Intelligence Committee, took a more public stance.

"Intelligence should not be partisan. Not about manipulation, it is about preserving impartial, nonpartisan information necessary to inform policy makers" and so they can protect the US, Cornyn posted in response to Schwartz's tweet. 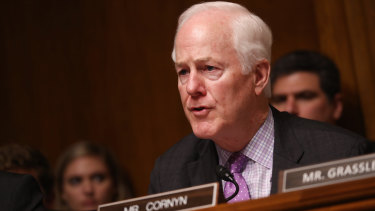 Cornyn's remark prompted a fierce response from Trump Jr. He suggested Cornyn and the other GOP senators were "taking a trained liar's word" on the dust-up instead of consulting with others in the White House, such as Trump's chief of staff Mark Meadows or his national security adviser Robert O'Brien.

The intra-party GOP fight comes as many experts warn that Trump's refusal to concede and allow Biden to begin his transition could harm national security.

"Our adversaries aren't waiting for the transition to take place," former Rep. Mike Rogers, who chaired the House Intelligence Committee when he was in Congress, tweeted earlier this week in urging for Biden's access to critical intelligence information.

"He needs to know what the latest threats are & begin to plan accordingly," said Rogers. "This isn't about politics; this is about national security." 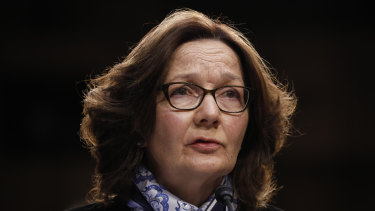 There is a behind-the-scenes tussle over Gina Haspel, the director of the Central Intelligence Agency.Credit:Bloomberg

King said Republicans who continue resist giving Biden access to the briefings are endangering the country.

"The transition is inherently a dangerous period. It's a period when adversaries view us as vulnerable," said King. He noted that the September 11 commission found the 37-day delay between the Clinton and Bush administration contributed to the lack of preparation for those devastating attacks.

"There are clear national security implications here, and you want the incoming administration to be as fully as informed as possible about where the danger areas are," he said.

So far, a key Trump appointee has refused to affirm Biden's electoral win, preventing the president-elect's team from beginning its official transition. Emily W. Murphy, head of the federal General Services Administration, has yet to sign off on an official declaration recognising Biden's victory – a move that blocks his access to the intelligence briefings, as well as other critical materials and funding his team needs to prepare for the transfer of power.

The White House and the GSA did not immediately respond to a request for comment.

Lankford, a member of the Senate Oversight Committee, said he has "already started engaging in this area." He noted President Bill Clinton made available briefings to then-Texas Governor George W. Bush in 2000, even though that election was much closer and hotly contested for weeks after voting ended.

Most Republican lawmakers have refused to acknowledge Biden's victory and backed Trump's refusal to allow the transition to begin. And Lankford reiterated that position in a tweet after his radio interview.

Trump is "fully in his right to ask for recounts and for every legal question to be fully vetted and resolved," he tweeted Wednesday evening. "It is important for the 71 million Americans that voted for President Trump that at the end of all this their questions are answered."

Still, Lankford is not alone in his push for Biden to be allowed to ramp up his official transition. Biden was declared the winner of the presidential election on Saturday. States will certify their election results in the coming weeks.

Rubio, the chairman of the Senate Select Committee on Intelligence, said any declaration from the GSA would not undercut the legal claims that President Donald Trump's campaign is making in several states. Trump has claimed, without evidence, that voter fraud and other irregularities cost him the election.

"We need to have that contingency in place," Rubio, told Bloomberg News earlier this week. "I don't think allowing the GSA to move forward on some of the transition work prejudices in any way any of the legal claims the president intends to make."

McConnell, who has not acknowledged Biden's victory, said that Trump is "100% within his rights to look into allegations of irregularities and weigh his legal options."

Biden said Trump's fraud allegations are baseless and his unwillingness to concede is "an embarrassment," but insisted it will not impede the transition.

"We are already beginning the transition," he said. "Nothing's going to stop that."