An inmate at Goulburn jail has been charged with terrorism offences for allegedly plotting to attack police, military and Corrective Services officers.

Tuki Lawrence, 24, who was in prison for a domestic violence offence when he came under suspicion, was charged by counter-terrorism police after letters were found in his cell that allegedly outlined plans to carry out attacks. 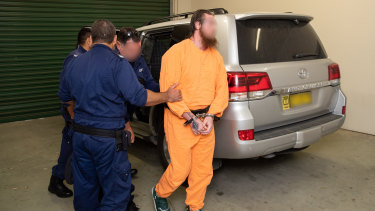 Goulburn jail inmate Tuki Lawrence, 24, has been charged over an alleged terrorist plot.

Investigators first linked Lawrence to Islamic State sympathisers two years ago, including Isaak El Matari, who wanted to create a Blue Mountains base to launch guerilla attacks across Sydney, and Radwan Dakkak, 25.

El Matari, from Greenacre, allegedly proclaimed himself the “General Commander of Islamic State Australia” and pleaded guilty in October to making preparations for a terrorist act and incursion into foreign countries for the purpose of engaging in hostile activities.

Dakkak, from Denistone, served 18 months in prison on two charges of knowingly associating with a member of a terrorist organisation. Shortly after his release in January, he was charged with breaching a control order by allegedly accessing online material supporting executions, beheadings and torture.

After the operation – jointly run by the Australian Federal Police, NSW Police and other agencies – identified Lawrence as an associate of El Matari and Dakkak, he became subject to greater scrutiny.

He was placed on a continuing detention order after a search of his cell in October 2019 allegedly uncovered the evidence of plans to attack law enforcement and military personnel.

With his possible exit from prison looming, police charged Lawrence on Thursday with two counts of acts done in preparation for terrorist attacks.

The offences carry a maximum penalty of life imprisonment.

NSW Police Force counter terrorism and special tactics commander, Assistant Commissioner Mark Walton, said investigations involved specialist officers trained to “identify and disrupt potential terrorist plans by individuals or groups, monitor those at risk of radicalisation and detect those who seek to do harm within our community”.

Lawrence is due to appear before Parramatta Local Court on April 2.