The British Government’s preparation for a ‘no deal’ Brexit has ground to a halt, officials have claimed.

Theresa May will not be able to deliver on her threat to walk away from talks if Brussels tries to impose a punishment deal because money has not been spent on contingency plans, it has been reported.

The stark warning piles further pressure on the Prime Minister who is struggling to get her divided Cabinet to sign up to her Brexit vision.

And it comes ahead of a crunch summit next month when  EU leaders have demanded Britain spell out more fully how it plans to avoid a hard Irish border after Brexit. 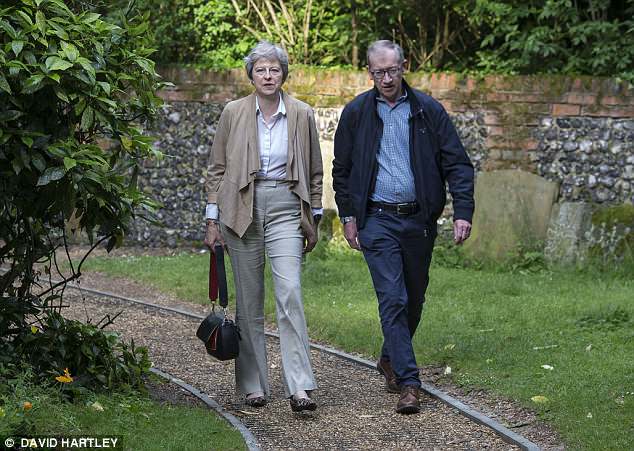 Theresa May (pictured with her husband Philip on her way to church in Maidenhead yesterday) will not be able to deliver on her threat to walk away from talks if Brussels tries to impose a punishment deal because money has not been spent on contingency plans, it has been reported

Brexiteers have  urged the PM to invest in preparing for a no deal Brexit to strengthen the UK’s hand in the talks.

But a senior British Brexit official told the Financial Times: ‘Our preparedness for no deal is virtually non-existent.

‘Our ability to deliver a ‘no deal’ outcome recedes with every week that passes.’

While other officials involved in the talks said they are being discouraged from taking on projects that might only be needed should there be no agreement on customs and regulatory co-operation by next March.

The revelations will spark alarm among Brexiteers who have repeatedly urged the PM and her Chancellor to spend more money on the no deal preparations.

Sir Ivan Rogers, the UK’s former ambassador to the EU, last week warned that the UK had still not set up the independent regulatory bodies needed if the UK has a ‘no deal’ Brexit.

He said: ‘If we want . . . genuinely to go it alone . . . then we have to be going full tilt in developing that regulatory capability at huge speed.

‘The fact that, in so many areas, we are obviously not doing that . . . is yet another reason why the EU side has long since concluded that the UK would not walk out.’

Another former mandarin told the newspaper: ‘How many years does it take to set up a medicines agency? Or chemicals approval? Or civil nuclear-safety standards? Or a new state aid policy?

‘Where is the legislation? Where are the skilled staff coming from?’ 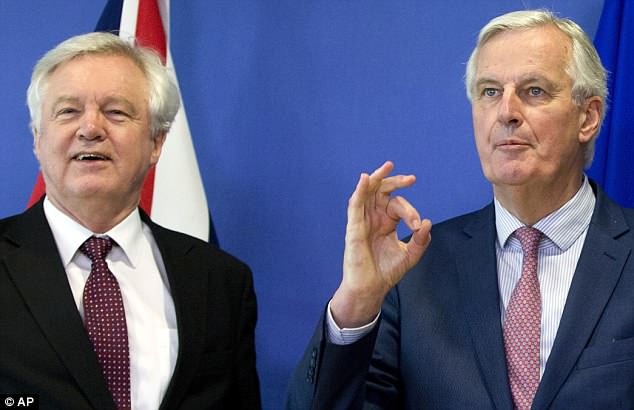 But the money only became available in the financial year starting in April – just a year before the UK leaves the bloc.

Another £1.5bn has been set aside but this is only set to be used for the financial year after March 2019 when the UK is formally due to leave the EU.

Jacob Rees-Mogg, the leading Tory Brexiter, urged Mrs May to revive her threat to leave the EU without a deal if Brussels takes an uncompromising approach in the Brexit negotiations.

He told the BBC yesterday: ‘We should say quite clearly: “If we don’t get the trade deal we want, you don’t get the money. That’s a very strong negotiating position.’

A Number 10 spokesman said: ‘The Prime Minister is committed to getting the best possible Brexit deal, one that works for the UK and the EU.

‘The Government is committing extensive resources as part of our preparations for leaving the EU — whether in the event of a deal or not, and at the autumn Budget the chancellor allocated £3bn specifically for our exit preparations.’

The row comes as Mrs May’s Cabinet remains deeply divided over the future customs arrangements the UK will have with Brussels after Brexit.

The PM favours a customs partnership – which would see the UK collect tarifson behalf of the EU.

But key Brexiteers in cabinet, including Boris Johnson, wants the UK to fully cut ties and adopt a ‘maximum facilitation’ system which would see technology and trusted trader status help trade flow freely across the Irish border.

Under the so-called ‘hybrid model’, the UK would collect EU import tariffs on behalf of Brussels.

Britain would be responsible for tracking the origin and final destination of goods coming into the country from outside the EU. The government would also have to ensure all products meet the bloc’s standards.

Firms selling directly into the UK market would pay the tariff levels set by Brussels – but would then get a rebate if Britain’s tariffs are lower.

Supporters of the hybrid plan in Cabinet – including Theresa May, Philip Hammond and Greg Clark – say keeping duties aligned up front would avoid the need for physical customs borders between the UK and EU.

As a result it could solve the thorny issue over creating a hard border between Northern Ireland and the Republic.

Mrs May has been advised by the chief whip that the hybrid option could be the only way of securing a majority in parliament for a Brexit deal.

But Brexiteers regard the proposal as unworkable and cumbersome – and they were joined by Sajid Javid and Gavin Williamson in criticising it at a tense ‘War Cabinet’ meeting last week.

There are fears the experimental system will either collapse and cause chaos, or prevent the UK from being able to negotiate free trade deals around the world after Brexit.

Mrs May has instructed official to go away and revise the ideas. Eurosceptics are braced for her to bring back the plan with only ‘cosmetic’ changes, and try to ‘peel off’ Mr Javid and Mr Williamson from the core group of Brexiteers.

They are also ready for Mrs May to attempt to bypass the ‘War Cabinet’ altogether and put the issue before the whole Cabinet – where she has more allies.

The ‘Max Fac’ option accepts that there will be greater friction at Britain’s borders with the EU.

But it would aim to minimise the issues using technology and mutual recognition.

Goods could be electronically tracked and pre-cleared by tax authorities on each side.

Shipping firms could also be given ‘trusted trader’ status so they can move goods freely, and only pay tariffs when they are delivered to the destination country.

Companies would also be trusted to ensure they were meeting the relevant UK and EU standards on products.

Senior ministers such as Boris Johnson, Michael Gove and Liam Fox believe this is the only workable option.

But Remain minded Tories such as Mr Clark insist it will harm trade and cost jobs in the UK.

They also warn that it will require more physical infrastructure on the Irish border – potentially breaching the Good Friday Agreement. It is far from clear whether the government would be able to force anything through parliament that implied a hard border between Northern Ireland and the Republic.

The EU has dismissed the idea that ‘Max Fac’ could prevent checks on the Irish border as ‘magical thinking’.