Grandmother and girl, 7, are knocked down by galloping horses in Spain

Moment grandmother and her granddaughter, 7, are trampled by galloping horses as they cross street during traditional Spanish race – leaving the 69-year-old fighting for her life

This is the moment a woman was left fighting for her life after she stepped in front of two horses with her seven-year-old granddaughter during a famous Spanish race.

Felisa Castano, 69, was seriously ill in a hospital intensive care unit today after being knocked down as she tried to cross the street with the youngster in Arroyo de la Luz, western Spain.

Her granddaughter is under observation in another hospital but is said to be improving after the incident at around 3pm on Easter Monday. 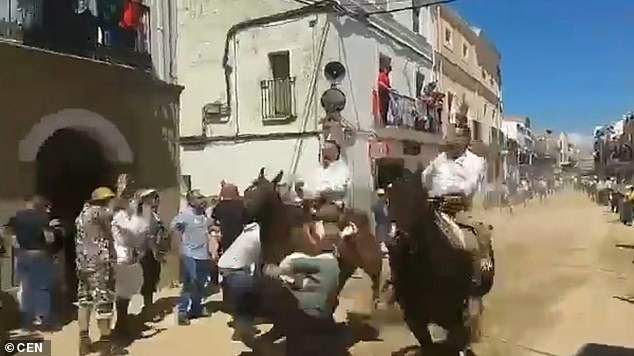 Spectacular horse races are the highlight of the religious festival, held in honour of the Virgin of the Light since the 13th century, in the town.

This year more than 150 riders and horses raced through the streets, cheered on by locals and tourists for the first time since the coronavirus pandemic forced a two-year break.

Footage showed the heart-stopping moment Felisa was hit as she crossed in front of the oncoming horses while holding her granddaughter’s hand. 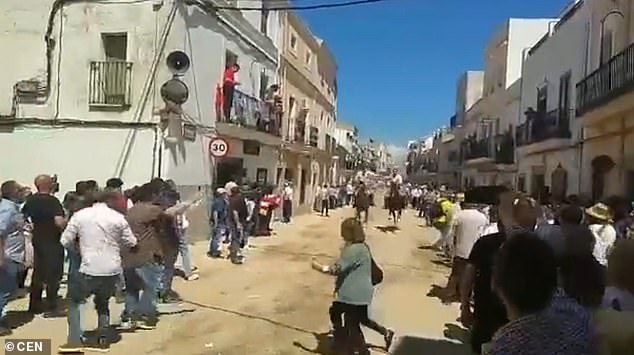 The horses were racing as part of a religious festival, which has been held in honour of the Virgin of the Light since the 13th century 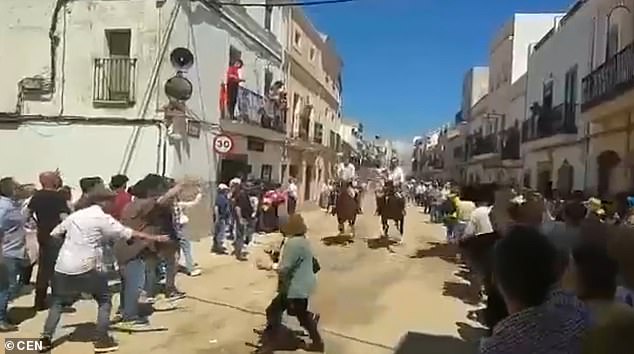 It was clear she had no idea the animals were so close and the riders could do nothing to avoid her.

She was rushed to the intensive care unit of Caceres University Hospital – a 30-minute drive away – with head injuries, broken ribs and a fractured pelvis.

The 69-year-old dressmaker’s condition was said to be ‘serious’ today.

Her granddaughter remained in observation at nearby San Pedro de Alcantara Hospital, also in the provincial capital of Caceres, although her condition is improving.

Local reports said the pair had been on their way back to the family home nearby from a park and had not been watching the races.

The races were suspended while medics treated them at the scene before ambulances took them away. 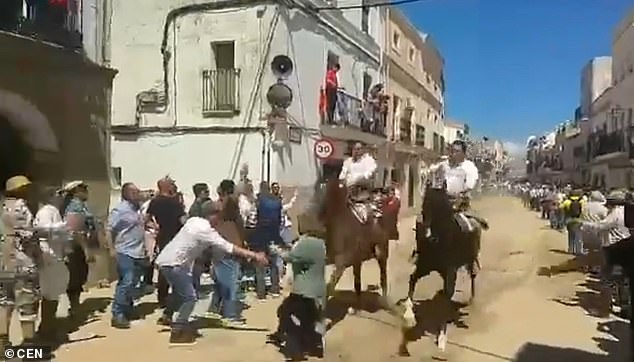 She was fighting for her life on Tuesday, while her granddaughter was in a separate hospital under observation

A spokesman for a regional government-run emergency services coordinator said: ‘Two people have been hurt as a result of an accident involving horses.

‘The woman, who is 69, was taken to Caceres University Hospital.’

Three others were reported to have sustained minor injuries during the festivities.

They received treatment at the scene and did not need to be taken to hospital.

In 2009, a 45-year-old local police officer was killed at the festival after being struck by a horse.

He had been trying to stop a woman going up to greet a friend as two horses raced towards them.