Two Victoria Police officers criticised by a coroner for their conduct on the day in 2017 that Yorta Yorta woman Tanya Day suffered a fatal fall while in custody have escaped serious disciplinary action.

Prosecutors announced in August that there would be no charges against Sergeant Edwina Neale and Leading Senior Constable Danny Wolters, despite deputy state coroner Caitlin English referring the officers to be assessed for criminal charges. 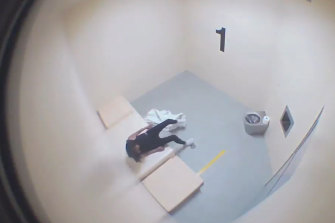 Tanya Day in the Castlemaine police cell where she hit her head at least five times.Credit:Coroners Court of Victoria

The Age revealed on Thursday that the police force and the State of Victoria were being sued by the family of Ms Day, whose death from injuries sustained in a fall in the cells of the Castlemaine Police Station in December 2017 came after she had been detained for public drunkenness.

In the wake of the tragedy, one of the state’s highest profile Aboriginal deaths in custody of recent years, the state government has said it will remove the offence of public drunkenness from the statute books.

But Victoria Police, who told the coronial inquiry that it had made no changes to its practices or procedures as a result of Ms Day’s death, confirmed this week that its internal investigation into its two officers had resulted in no serious disciplinary action.

“In December 2018 a sergeant and leading senior constable were the subject of a disciplinary investigation,” a spokeswoman said.

“The allegation around the conduct of the sergeant was not substantiated.

In its civil action against the police, lodged with the Supreme Court this month, members of the Day family allege the state government and police are liable for their relative’s death because they unlawfully detained Ms Day, failed to exercise due care when she was under arrest, and by their negligence caused her death.

They also claim Ms Day’s status as an Aboriginal woman was closely linked to her mistreatment by police, and that the state government was aware of the impact this has in carrying out policing.

The office of Police Minister Lisa Neville has been approached for comment.